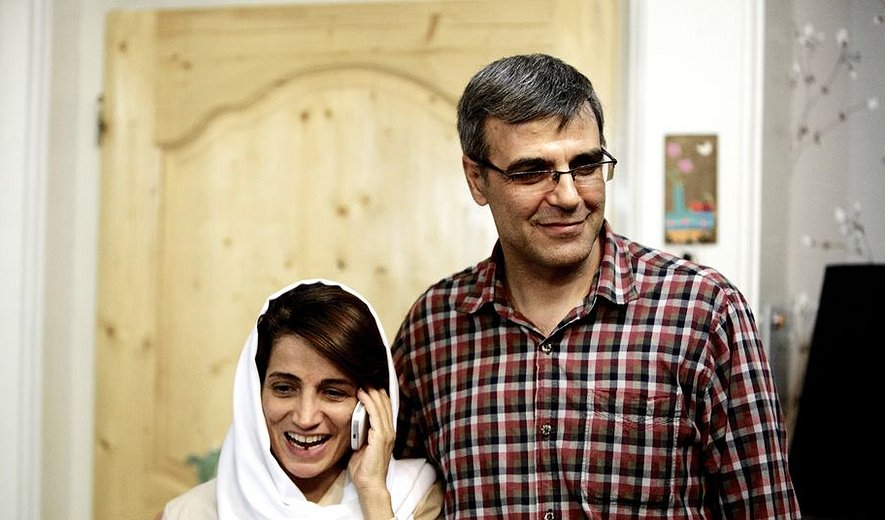 Kin punishment, the practice of punishing family members, and punishing individual/s who have no connection to the commission of an alleged crime, have long been outlawed in democratic societies. This is known as the principle of the individualisation of punishment in criminal law. Accordingly, freezing Mr Khandan’s bank accounts in order to further pressure Nasrin Sotoudeh, would be in breach of the principle of the individualisation of punishment.

Reza Khandan’s bank accounts have been frozen by judicial officials on the orders of the Evin Prosecutor’s Office without any reasons given.

Reza Khandan however, sees the latest move by the Evin Prosecutor as a continuation of “his daughter’s arrest by security forces a few months ago” and the “trumped-up charges against him” to pressure Nasrin and her family.

Speaking to IHR, he says: “Arresting my daughter and freezing my bank accounts are evidence that punishments have become familial, and when they want to punish an individual, they may violate their civil rights and privacy and even have them fired, freeze their bank accounts, ban them from leaving the country, in other words, use every opportunity to put pressure on that individual or their family members.”

In recent months, several members of Nasrin Sotoudeh’s family, including her daughter Mehraveh Khandan, have been pressured and harassed by judiciary and security agencies.

Mehraveh Khandan was arrested by security agents at her parents’ home on 17 August 2020 and transferred to the Evin courthouse. She was released on bail hours later and tried on 27 October 2020 by Branch 1175 of the Quds Judicial Complex. They have been informed that the case was opened against her on the complaint of “Fatemeh Hassanpour,” an Evin Prison official.

Aged 12, Mehraveh who is now 20, was banned from leaving the country by the Second Judicial Branch of the Evin Shahid Moghaddas Court, without any reasons cited.

Reza Khandan thinks that he and his wife are also probably banned from leaving the country: “Nasrin has always either had an open case against her or she has been in prison. She was banned from leaving the country even when she was free and had no convictions against her. As for me, I have not checked as I had no intentions of travelling but it is likely that I am under a travel ban due to my current case in the courts.”

Reza believes that freezing his bank accounts may be in relation to the case that was opened against him by the judiciary in 2018 in connection to his wife, Nasrin.

“I was arrested on 4 September 2018, I was detained for almost four months and my case was heard before Branch 15 of the Revolutionary Court which sentenced me to six years in prison. On appeal, my co-defendant, Farhad Meysami’s convictions were upheld but neither myself nor my lawyer were informed of the judgement in my appeal,” he said of the case.

According to Mr Khandan, lawyer and human rights activist, Mohammad Moghimi was in court as his legal representative at the time of the appeal hearing and is aware of the details of his case.

Speaking to IHR, Mohammad Moghimi said: “In some cases, judicial officials sometimes make decisions about human rights activists and political prisoners based on their own illusions.”

Mr Moghimi further explained: “Freezing a bank account is only authorised in cases of financial crimes and may only be implemented by a court order. Even in cases where judicial authorities issue an order to freeze an account, the order must be evidenced and reasonable, else such actions would be unlawful.”

According to the lawyer, personal bank accounts are considered private property and protected by the law.

Nasrin Sotoudeh is a lawyer, human rights defender, member of the Iranian Human Rights Defenders Association and an activist against the death penalty. Previously imprisoned for her professional and human rights activities, she was arrested again on 13 June 2018 and sentenced to five years in prison in absentia for “concealing a spy.”

In a separate case of seven different charges, she was sentenced to 148 lashes and 33 years in prison by Branch 28 of the Revolutionary Court of Tehran, presided over by Judge Moghiseh. Nasrin Sotoudeh has represented many human rights activists, women's rights activists, victims of child abuse and juvenile defenders on death row. She has also been convicted of “membership in an illegal group” for her work with Legam, a campaign that seek to abolish the death penalty step by step. She has been serving out her sentences at Evin Prison since 2018.