Two men were hanged publicly  in Shiraz today. The executions were carried out under strict security measures in front of tens ordinary citizens. Many children were among those who watched the execution. Iran Human Rights strongly condemns today's barbaric executions and calls for international reactions. (Pictures below, Graphic)  Iran Human Rights, February 13, 2014: Two prisoners were hanged in public in Shiraz Thursday morning February 13. According to the state run Iranian news agency Fars, the prisoners were 36 and 37 year old men, convicted of murder and rape. One of the prisoners was convicted of kidnapping, rape and murder of an 8 year old child, while the other man was convicted of rape in seven different cases, said the report.

The prisoners are identified as Rahim Esfandiari Bayat (36) and Mohammad Darvish (37), and were hanged in the Kozehgari Square of Shiraz in front of tens of civilians. Iran Human Rights (IHR) strongly condemns today's barbaric executions.  Mahmood Amiry-Moghaddam, the spokesperson of IHR, said: "International community must not let Iranian people and in particular children be exposed to such a barbaric punishments. Public executions must be banned according to the international law". 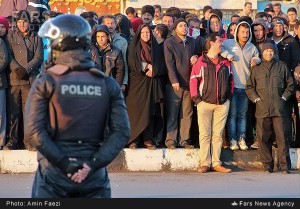 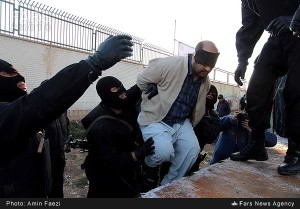 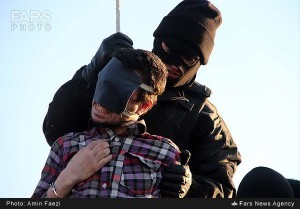