At least 12 executions, three of them in public, have taken place in the last three days in Iran.    Iran Human Rights, May 21, 2015: Seven people were hanged in Iran on Wednesday (May 20) and Tuesday, according to the Iranian state media. Five people were hanged in the Rajaishahr prison of Karaj, Wednesday morning May 20, reported Iranian state broadcasting. The prisoners were identified as "Ardalan", "Ali", "Morteza", "Meysam" and "Behrouz" and were all convicted of murder, said the report. Iran Human Rights (IHR) has received unconfirmed reports about the execution of three other prisoners in the Rajaishahr prison. These reports are being investigated. One prisoner was hanged in public in the city of Ghochan in northern Iran today. The prisoner who was identified as "A.

Kh." was convicted of murder four years ago. He was a drug addict since his childhood, said the report. Another prisoner was hanged publicly in the city of Minab (Southern Iran) on Tuesday May 19. According to Jomhuri-e-Eslami newspaper, the prisoner was identified as "Ayoub Torkamani", who was charged with posses 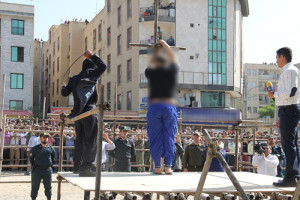 sion and trafficking of 10 kilograms and 800 grams of crack, said the report. He was arrested seven years ago. Iranian state media also reported that the flogging sentence of a man identified as "Kamran" was implemented Monday morning May 18 (picture). He was convicted of theft. On Sunday the Iranian media reported about amputation sentence of another prisoner in Khuzestan province (southwestern Iran).