Iran: The Arrest of A Human Rights Defender for Pursuing Her Brother’s Execution Case in the 80s

Iran Human Rights (SEPT 14 2017): Rahele Rahemipour was arrested by the Ministry of Intelligence and is being interrogated at Evin prison. She is a human rights activist and one of the plaintiffs of the 80s executions who pursued her brother’s execution case and his child’s fate.

According to a close source, Rahele Rahemipour, one of the plaintiffs in the 80s execution cases, was arrested at her home by the agents of the Ministry of Intelligence on the evening of Sunday September 10. The agents also searched her home and took some of her personal belongings such as her documents, laptop, and two phones.

“This is the first time Rahele is arrested. She was called to the Ministry of Intelligence last year, and she told them to issue a subpoena. After summoning and interrogating her three or four times at Evin prison each of which took several hours, she was put on trial at branch 15 of the Islamic Revolutionary Court and Judge Salavati sentenced her to one year in prison after two sessions,” said one of Rahele Rahemipour’s relatives to Iran Human Rights (IHR).

The same source also said, “The lawyers that Rahele introduced to the court were not allowed to attend the court sessions and in the end, she was sentenced to one year in prison on the charge of propaganda against the system by meeting political prisoners and attending illegal gatherings”.

The two men and a woman who arrested Rahele Rahemipour refused to tell her family whether she was arrested for the one-year imprisonment sentence she had received earlier or a different reason. This human rights activist called her home only one time on the evening of September 11 and told her family that she was under interrogation.

Rahele Rahemipour’s brother, who was executed in the 80s, was called Hossain Rahemipour and he was a dentist. Hossain Rahemipour was arrested in 1983 along with his wife who was pregnant at the time and their child was born in prison. After being born, the prison guards took the child away from his mother claiming that he was suffering from jaundice disease and two days later they claimed that the child passed away. The prison officials never delivered the body to his family and did not reveal the whereabouts of his burial place to his family. That was what Rahele Rahemipour was trying to figure out.

Iran Human Rights (IHR) urges human rights organizations and, especially, the UN Committee on Enforced Disappearances to insist on Rahele Rahemipour’s unconditional and immediate release and discover the fate of her nephew.

Mahmood Amiry-Moghaddam, the director and spokesperson of Iran Human Rights (IHR) said: “The forcible reaction that was provoked by Rahele’s reasonable request for information on the whereabouts of her nephew and her complaint about the extrajudicial execution of her brother in the 80s, only proves that the current Iranian authorities do not regret their inhumane behavior in the 80s and still want to cover it.” 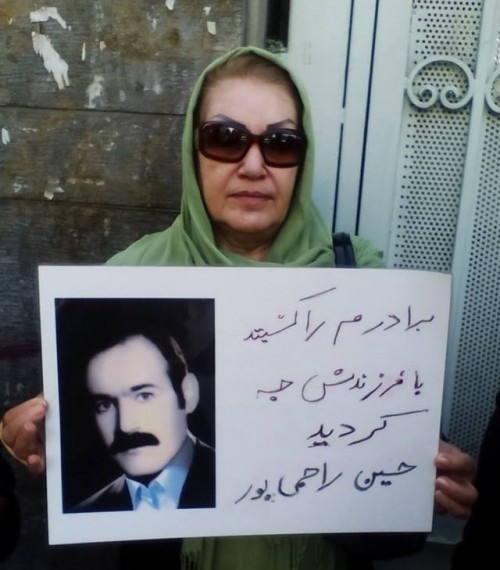