2021 Executions Based on Charges

While multiple offences are punishable by death, the charges leading to the most executions in recent years have been murder, drug-related offences, moharebeh, efsad-fil-arz, baghy and rape/sexual assault.

The important point to note is the systematic denial of legal due process, unfair trials, use of torture and duress, forced confessions and lack of a transparent and independent judiciary in Iran. The charges in each case therefore, are the official account and charges by Iranian authorities, and have not been confirmed by independent sources. 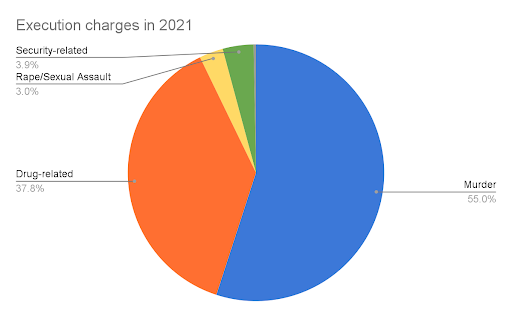 The chart above shows the distribution of each charge used for executions in 2021. For the fiftth year in a row, murder charges accounted for the majority of executions.

Murder charges accounted for the majority of all executions in 2021 with 55% of those executed having been sentenced to qisas, which is a decrease compared to 79% in 2020. 38% of executions were for drug-related charges, an increase from 9.4% in 2020. The security charges of moharebeh (enmity against God), efsad-fil-arz (corruption on earth) and baghy (armed rebellion) accounted for 4% of all executions, and 3% were for rape and sexual assault. There is no information about the charges against one of those confirmed to have been executed.

Of the charges leading to execution in 2021, murder and rape/sexual assault are heard before the Criminal Courts, while drug-related and the security charges of moharebeh, efsad-fil-arz and baghy fall within the Revolutionary Courts’ jurisdiction.

2021 executions at a glance