Two Public Executions and One Public Amputation in Iran

Four fingers of a man's right hand were amputated and two men were hanged publicly in Iran. In the last 3 weeks at least 60 people have been executed in Iran. 15 executions have been carried out in public. Iran Human Rights urges the international community to condemn the wave of barbaric punishments by the Iranian authorities. In Farsi  Iran Human Rights, August 25, 2014: According to the Iranian state media, four fingers of a man's right hand were amputated in public, in the town of Abarkooh in the Yazd Province (Central Iran). The man who was  identified as "M. N."  was charged with robbery, said the state run Iranian news agency ISNA. The public amputation took place in the beginning of the last week.

According to the Iranian media two prisoners were hanged in public in two different Iranian cities on Sunday August 24. 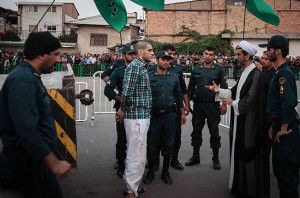 A young man identified as "Soheil" was hanged publicly in the the town of Sari (Northern Iran), reported "Rooz-e-No" news site. Soheil was charged with the murder of his brother, wife and cousin, said the report. Another man who was not identified by name was hanged publicly in the town of Borazjan (Southern Iran) on Sunday. According to Jam-e-Jam daily news the man was convicted of abducting and murdering two women. Since the first week of August at least 60 people have been executed in Iran. 15 of these executions have been carried out in the public. Iran Human Rights (IHR) strongly condemned the public amputation and executions by the Iranian authorities. Mahmood Amiry-Moghaddam, the spokesperson of IHR said: " Public amputation and executions are methods that the Iranian authorities use to spread fear in the society. These are the same methods as the group "ISIS" is using in Iraq and Syria. The difference is that Iran is a full member of the UN and has ratified many of UN's Conventions. We urge the international community to strongly condemn the Iranian authorities' use of barbaric punishments".