Iran Human Rights (IHR); September 21, 2021: Informed sources have told Iran Human Rights that Shahin Naseri who was a witness to Navid Afkari’s torture, has died under suspicious circumstances in solitary confinement in the Greater Tehran Penitentiary. His brother has confirmed his death but has not been contacted by officials.

According to information obtained by Iran Human Rights, Shahin Naseri who was serving a non-political sentence in the Greater Tehran Penitentiary, has died under suspicious circumstances after he was transferred to solitary confinement. He was transferred to the prison following his testimony about wrestler and protester, Navid Afkari’s torture in Shiraz.

“His friends informed us of his death in solitary confinement but we have yet to be contacted by any officials,” his brother told Iran Human Rights.

An informed source told IHR: “I saw Shahin Naseri’s corpse in the prison infirmary. He had repeatedly talked about Navid Afkari’s torture and forced confessions. He talked about witnessing Navid Afkari’s torture. On the anniversary of Navid Afkari’s execution (September 12), they transferred him from the ward to an unknown location and we thought he had been transferred to Ward 209 in Evin Prison. But we found out today that he was held in solitary confinement in the Greater Tehran Penitentiary to prevent him from making phone calls and giving interviews to news outlets.”

“The Prison Organisation probably wants to announce his death as suicide. But Shahin Naseri was neither depressed nor did he have any mental health issues to commit suicide. He had a wife and children and was hopeful for the future. He also didn’t suffer from any illnesses to have died of disease,” the source added.

The Islamic Republic authorities have continuously denied that Navid Afkari had been subjected to torture and maintained that he had confessed of his own accord. Following the Judiciary’s denial, Iran Human Rights refuted the claims with court documents and pointed to Shahin Naseri’s witness testimony without naming him.

It read: “The witness was an individual who was in custody in Shiraz at the same time as Navid and had no previous acquaintance or friendship with him. He provided an official testimony to the torture of Navid (including being hit with a metal club on his hand) but according to documents in IHR’s possession, the judge in the case ignored the testimony and refused to call the witness to testify in court.” Shahin who was a business expert, provided a detailed description of Navid Afkari’s torture in the “investigation from the witness” document. In his 4-page testimony, he describes hearing Navid Afkari shouting and witnessing two plain-clothed officers beating him. Shahin later gave interviews where he testified in his own voice about what he had witnessed.

Navid Afkari was executed on 12 September 2020.

“The man standing over him (Navid) was saying ‘everything I say is right’ and I don’t know his name but I think he had coloured eyes (non-brown/black) and a white and red complexion, broad shoulders and hair that looked like implants or that it had been brushed back. Navid’s hand was on his head, he beat Navid’s hand four times and was swearing and shouting that ‘what I said is right.’

Navid was lying on his side on the floor, holding his head and begging for them not to beat him. When we entered the detention centre, I saw Navid and his hand was swollen and destroyed. Navid said Captain Abbasi has broken my hand. I witnessed the pain and suffering Navid endured because of his broken hand in the two months that I spent there, as well witnessing his hand being beaten.” 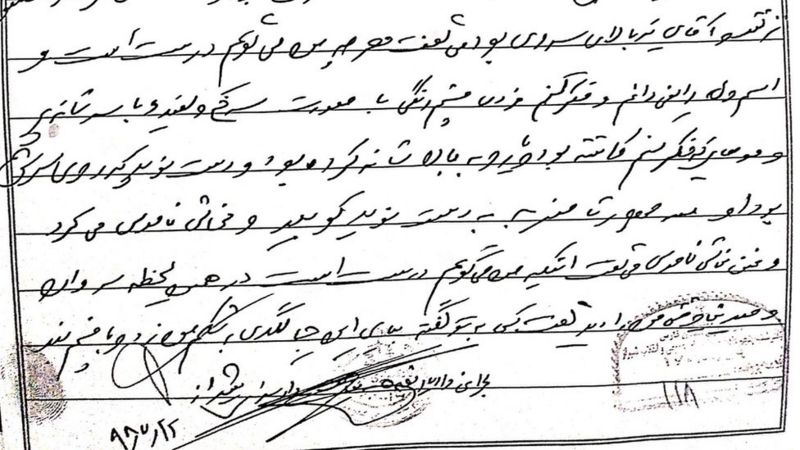