Iran Protests, Navid Afkari, Vahid Afkari
Share this
The defendants’ submission for retrial, which is in IHR’s possession, explicitly mentions the allegations of torture 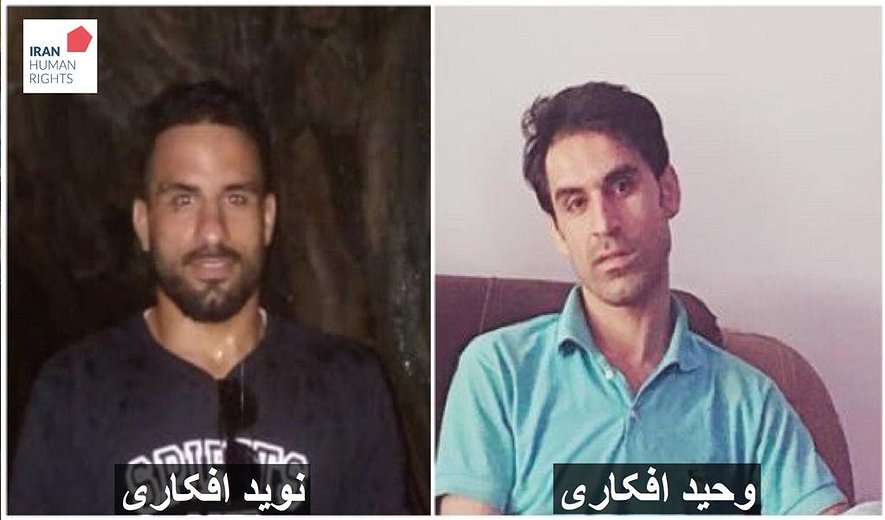 Iran Human Rights (IHR); August 28, 2020: A number of August 2018 protesters in Shiraz were arrested a month and a half later on charges of murdering a person said to be a plainclothes agent. Of those, Navid Afkari was sentenced to qisas (retribution in-kind) for murder and his brother, Vahid sentenced to 25 years in prison on charges of being the secondary to the murder by Branch One, Criminal Court One of Fars Province. In court, both brothers said everything they had confessed to had been lies and obtained under torture. Yet, the sentences were upheld by the Supreme Court and as their request for a retrial has been denied, Navid Afkari is in danger of execution.

Iran Human Rights has obtained court rulings and documents showing that the evidence against them is weak and the heavy sentences were based on confessions taken under torture. The defendants’ chosen lawyers also resigned after being threatened by the judicial authorities and replaced by appointed lawyers.

Emphasising that the death penalty is inhumane, Iran Human Rights (IHR) deems the sentences for the defendants accused of participating in the protests to be gross violations the rights to due process and calls on the international community to pressure the Iranian authorities to stop the executions of protesters.

Mahmood Amiry-Moghaddam, IHR director said: “Iranian authorities intend to execute an individual on trumped-up charges and confessions obtained under torture.” He emphasised: “The executions can be stopped by raising the political cost of such executions through mass popular campaigns and a strong response from the international community.”

Particulars of the event:

At midnight on 2 August 2018, amid the widespread protests in Shiraz, Hassan Torkaman, a security guard at a government building who according to case documents was tasked with identifying protesters, was stabbed with a knife near Shah Dayiollah Street and later died in hospital.

While no witness was present at the scene, a local shopkeeper said he was suspicious of two motorcyclists.

Security forces compiled a list of mobile phones connected to cell towers from that location at the time of the incident and ultimately arrested several young people around 45 days later. The “witness” who was located a few kilometres away from the incident, saw two motorcyclists, was unable to identify Vahid, and did not think that Navid’s full face looked like the person and only testified that he looked similar to the person he saw from the nose down.

In this case, their other brother, Habib Afkari and Saeed Arjmand were also accused of forming a “group” with the two main defendants in the case. This is while Saeed was only friends with one of the brothers. The judge at the Revolutionary Court convicted the first defendant (Navid) of moharebeh and sentenced him to death based on the assumption that he had formed a group against the Islamic Republic. The Revolutionary Court decision is under appeal.

The two main defendants in the case:

Navid Afkari is only 27 years old. He is single, born in 1993 and a plasterer who wrestled professionally and according to relatives, has won several medals in national competitions. His brother Vahid was born in 1985. He is also single and was arrested along with his brother on 17 September 2018 on the suspicion of security forces. The two brothers also did not have a criminal record.

Criminal Court One of Fars Province:

Branch One of the Revolutionary Court:

1. Corruption on earth by forming a group of four people opposed to the system and running it with the intention of disrupting national security:

This was changed to moharebeh and the death sentence was issued.

2. Propaganda activities against the Islamic Republic of Iran

4. Enticing and inciting people to war and killing each other with the intent to disrupt national security

1. Corruption on earth by forming a group of four people opposed to the system and running it with the intention of disrupting national security:

The charge was changed to being an accessory to moharebeh and he received a 25-year imprisonment sentence.

2. Propaganda activities against the Islamic Republic of Iran

4. Enticing and inciting people to war and killing each other with the intent to disrupt national security

Some of the violations of the fundamental rights of the defendants

The defendants’ submission for retrial, which is in IHR’s possession, explicitly mentions the allegations of torture. Part of the document reads as follows:

"On page 403 of the case file, the honourable investigator of Branch Eight, Mr Behrouzi quoted Navid Afkari as saying: ‘I do not accept the charges and did not hit the late victim and do not accept my confessions’…in the 24 September 2019 session at Branch One of the Fars Province Criminal Court, page 579, the client Navid Afkari said: ‘I request an investigation into the torture of myself, Navid Afkari in the Intelligence Office by Captain Abbasi and Major Nikbakhti.’”

According to this document, Vahid Afkari also “states on page 373 of the honourable investigator’s case: ‘I do not accept the allegations against me' and in the 24 September 2019 session at Branch One of the Fars Province Criminal Court…clearly states: ‘I have been tortured by the relevant officers in the intelligence and criminal investigation offices.’ The client claims to have been tortured and put under so much physical and mental pressure that he attempted to commit suicide.”

In addition, the defendants' chosen lawyer resigned shortly after accepting the case. Relatives of the Afkari family say that the lawyer, under pressure from security agencies, refused to continue with the case.

The cell tower report also shows both Vahid and Navid as being in one place that night. However, according to at least two witnesses, Vahid was a guest at a family gathering and only had Navid’s mobile phone with him. This contradicts the official narrative of the case and after confessing under torture, the defendants have pointed out the baselessness of the confessions.

According to the lawyer’s submissions obtained by IHR, a friend of the Afkari brothers whose testimony were cited as one the main bases of the case, said in an official statement: the officers “forced me to lie with pressure and fear…any written statements attributed to me against Mr Vahid Afkari were written under pressure and are not approved by me.”

The forensic pathologist confirmed the defendants’ injuries were due to torture, and an eyewitness testified that Navid had been beaten.

Furthermore, the owner of the supermarket, who had been named as a witness, could not identify Navid’s full face as being the same as the person he saw and has stated in his own handwriting that Navid’s face only resembled the person he saw months ago from the nose down.

On 25 April 2020, the Supreme Court upheld the sentences issued to Navid and Vahid Afkari. The ruling states: “The explicit confessions of the defendants in the preliminary investigation, which have been quoted verbatim in the indictment and their claims of pressure and torture are not conclusive evidence.”