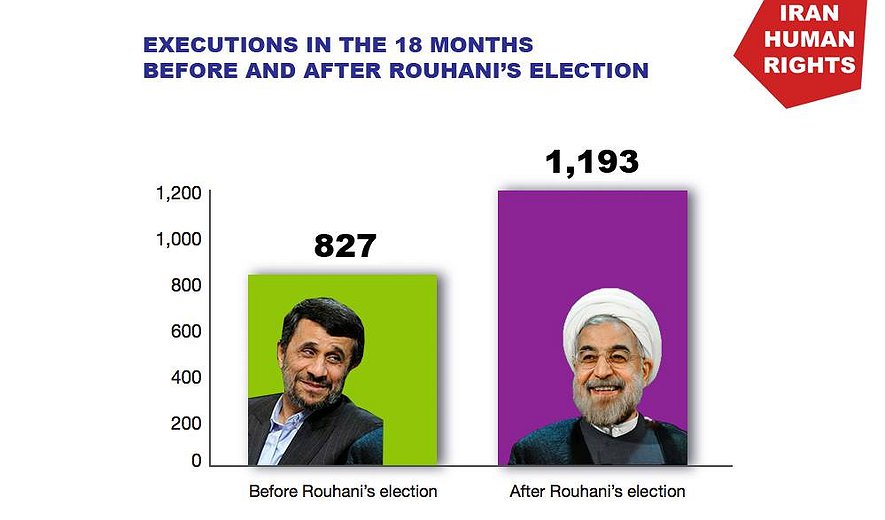 The annual report on the death penalty in 2014 shows that since the election of President Rouhani in June 2013, Iranian authorities have executed more than 1193 people. This is an average of more than 2 executions everyday.

Execution trends before and after the election of Hassan Rouhani:

Despite the optimism and hope after the election of Mr. Hassan Rouhani as the Iranian president, there are few indications that the human rights situation in the country has improved. In fact, a comparison of the 18 months before and after the presidential elections of June 2013 shows that the use of the death penalty has in fact increased.

Responsibility of the government in the implementation of the executions[1]

According to the Iranian constitution, the government, led by the President, doesn’t have the authority to issue and implement executions. The judiciary is the body directly involved, and it is the head of the judiciary (appointed by the Supreme leader) or the General Prosecutor in drug-trafficking cases, who sign the execution orders.  However, public executions seem to be the exception to this rule.

According to the law regarding responsibilities and authority of governors (who represent the government and not the judiciary), the Council for the Security of the Province (headed by the local governor) is specifically responsible for public order and tranquility.[2]

Therefore, besides the judiciary (represented by the local judges), the government (represented by the local governor) does have the authority to decide whether an execution should be carried out in public or not. For example, in 2014, the governor of the Sistan and Baluchistan Province (Southeastern Iran) had initially disagreed with the public execution of three alleged terrorists in his province.[3]

As mentioned in the previous section, the President, via his governors, has direct influence on the implementation of public punishments such as flogging, amputation and executions. Although we have observed a slight decrease in the number of public executions, Iran is among the very few countries that implement public executions.

In fact, Iran is, together with Saudi Arabia, on top of the list of countries implementing public executions. On the other hand, there is an increase in the total number of executions during the presidency of Hassan Rouhani. Although the judiciary, and not the government, have the authority to issue and implement death sentences, nor the President or his government representatives have even once criticized the high number of executions in Iran.

It seems that Mr. Rouhani’s government is not preoccupied with the issue of the death penalty. However, this can be changed if the countries involved in a dialogue with Iran put it on the agenda. The government is normally the counterpart in the dialogue between Iran and the international community.

[1] Tabasom Fanaian and Mahmood Amiry-Moghaddam: Public executions in Iran: an unfit measure in a modern society. In: ECPM Review on the death penalty in Iran, pp. 84-90, 2014.