drug-related charges, UNODC, Annual report, Larijani, World Day
Share this
There is no evidence that the UNODC cooperation with Iran has led to a decrease in drug trafficking. Besides, UNODC cannot be indifferent to the indiscriminate execution of hundreds of prisoners under the pretext of fighting the drug trafficking. 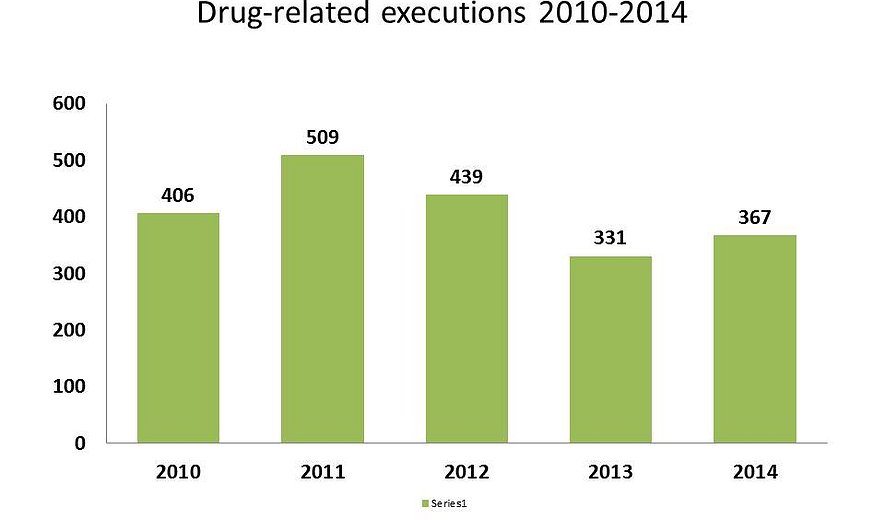 Iran Human Rights (IHR) published its seventh annual report on the death penalty on March 10, 2014. The following is part of the annual report.  Download the PDF Version of the Full Report Also see: At Least 1193 Executions since Hassan Rouhani’s Election as President in Iran Annual Report on the Death penalty in Iran- 2014: At Least 753 Executions   Iran Human Rights, March 16, 2014: According to a report published by Iran Human Rights (IHR) at least 2052 people charged with drug-related offences, have been executed by the Iranian authorities in the period of 2010-2014.

During the past five years, drug-related charges have counted for the majority of executions in Iran.[1] Based on death penalty reports, at least 2052 people have been executed for drug-related charges since 2010 in Iran. In 2013, there was a relative decrease in the number of drug-related executions compared to the previous three years. However, the decrease didn’t continue. In 2014, at least 367 people were executed for such charges. 123 of these executions were announced by the official sources.     Iranian authorities claim that many of those sentenced to death for drug-related charges are involved in organized, armed smuggling. However, there is a general lack of transparency in the Iranian judicial system and all those convicted for drug-related charges have been tried by the Revolution Courts behind closed doors, and most of those executed are not identified by name. Human rights groups have received many reports on unfair trials and confessions under torture. An example is Saeed Sedighi[2] who was executed in October 2012 despite calls from the UN Special Rapporteurs to halt the execution.[3] Furthermore, many of those executed belonged to the most marginalized parts of society.

The international fight against drug trafficking and executions

The United Nations’ Office for Drugs and Crimes (UNODC) has cooperated with Iran in the fight against drug trafficking for the past decades. Several European states have provided millions of dollars worth of support through UNODC to counter-narcotics forces in Iran. A recent report by Reprieve provides a direct link between the UNODC funding and thousands of executions in Iran.[4],[5] Together with several other right groups, IHR and ECPM have urged the UNODC on several occasions to freeze its counter-narcotic funding[6],[7] to Iran or condition it to a stop in drug-related executions. Several countries such as Denmark, Ireland[8] and the UK have stopped their counter-narcotic aid to the UNODC programs in Iran. However, the UNODC continues praising Iranian authorities for their efficient struggle against trafficking without taking into account the several hundred who are executed every year for such charges in Iran. Yury Fedotov, Executive Director of the U.N. Office on Drugs and Crime (UNODC), told reporters that “Iran takes a very active role to fight against illicit drugs,” [9] before an international meeting on global efforts to combat narcotics in Vienna on March 13-14. “It is very impressive,” Fedotov said referring to the reports showing that in 2012, Iran seized 388 tons of opium, the equivalent of 72 percent of all such seizures around the world. Commenting on Mr. Fedotov’s praise of Iran’s fight against drugs, IHR spokesperson Mahmood Amiry-Moghaddam said: “The amount of seized drugs is the only positive result UNODC and the Iranian authorities can present. But there is no evidence that the UNODC cooperation with Iran has led to a decrease in drug trafficking. Besides, UNODC cannot be indifferent to the indiscriminate execution of hundreds of prisoners under the pretext of fighting the drug trafficking. UNODC must take its share of responsibility.” [10] Although there has not been a significant reduction in the number of executions for drug-related charges, the growing international attention seems to have some impact on the Iranian authorities’ rhetoric regarding this issue.

Change in the Anti-Narcotic Law: a change in rhetoric or practice?

In previous years, Iranian authorities proudly presented the high number of executions for drug offences as a sign of their efficient struggle against  international drug trafficking. As late as March 2014, referring to the drug-related executions, Javad Larijani, head of the Iranian Judiciary’s “Human Rights Council” said: “ We expect the world to be grateful for this great service to humanity”. He continued: “Unfortunately, instead of celebrating Iran, international organizations see the increased number of executions caused by Iran’s assertive confrontation with drugs as a vehicle for human rights attacks on the Islamic Republic of Iran.” [11],[12] However, the rhetoric has clearly changed in the last months of 2014. On December 4, in an English-language interview with France 24, Javad Larijani said, “No one is happy to see that the number of executions is high.” Javad Larijani continued, “We are crusading to change this law. If we are successful, if the law passes in Parliament, almost 80% of the executions will go away.[13] This is big news for us, regardless of Western criticism.” Interestingly, his statement was published also by the state-run Fars News Agency.[14] This has been echoed by the judiciary. Ayatollah Sadegh Larijani, Javad Larijani’s brother and the head of Iran’s Judiciary, addressed the need to change the country’s drug laws. During a December 2 meeting of judiciary officials, he said, “On the issue of drugs and trafficking, it seems necessary that we need a change in the legislation because the ultimate goal of the law should be implementing justice, while in reality, this goal is often not realized”.[15],[16] Based on these statements, one can conclude that the Iranian authorities have at least publicly admitted that the executions have not been an efficient mean in the fight against drug trafficking.   However, it remains to be seen to what extent these statements represent a real willingness for policy change and are not just a change of rhetoric by the Iranian authorities. Iran’s response to the UPR recommendations regarding the drug-related executions will be indicative of where Iran is heading.

Several countries have recommended Iran to respect the ICCPR, which restricts the death penalty for the most serious offences. Below are the recommendations that directly mention the drug-related executions.