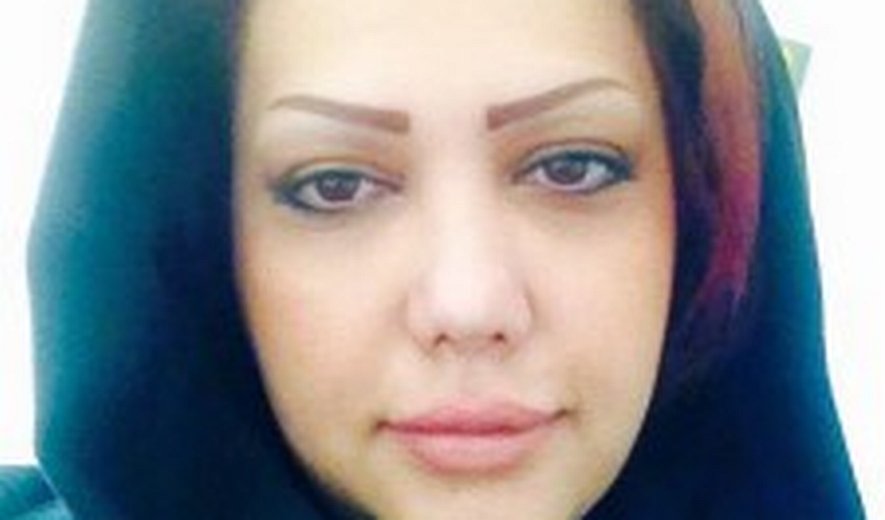 Iran Human Rights, June 12, 2015: It was January 27, 2015, Naghmeh Shahi Savandi, a citizen journalist from Kerman, arrived home from a day of shopping to be confronted by security agents. With her mom, aunt and children present, the agents violently raided her home and confiscated her computer, hard drives and CDs; they also confiscated her husband's personal belongings. They had an arrest warrant for Naghmeh, she was handcuffed and blindfolded and led out to a vehicle. In the car they instructed her to keep her head down as she was driven to a detention center where they held her for one night. The following day Naghmeh was taken to a court for her charges to be issued. The judge accused her of attempting to infiltrate the Islamic Republic, then she was transferred to a prison.
Naghmeh was tied to a bed and sexually harassed by the authorities. Next she was transferred to Evin in Tehran where she endured 75 days in solitary confinement. The authorities held her in ward 2A, an area of the prison that doesn't fall under prison jurisdiction and is completely run by the Iranian Revolutionary Guard Corps (IRGC). Naghmeh describes her cell as being so small that when she lay in it there was only about 20cm between her toes and the wall. She was warned by prison guards to not speak,  scream, cry, or raise her voice in any way. Naghmeh says she was psychologically tortured by her interrogators.

During her interrogations Naghmeh discovered that seven of her friends were also arrested on the same accusations and being held in Evin Prison. Their names are: Massoud Ghassemkhani, Mehdi Reyshahri, Roya Saberinejad, Fariborz Kardarfar, Amir Golestani, Amin Akramipour and Massoud Seyed Talebi.

She recalls her interrogators threatening and insulting her while constantly asking questions about her and her friend's Facebook activities. They presented her with photos of her family that she had posted on Facebook and interrogated her for hours about them while critiquing her physical appearance.  "They said to me: 'You don't need to do activism, you should go be a....' I don't want to say any more except that they would speak about my body parts and insult me."

Even after her release, the bitter memories of her arrest and time in prison remain: "They have a system during interrogation where they successfully find your weak spot. They play good cop and bad cop. They played with my mind so much that at times I would convince myself that I had reacted too harsh with the interrogators. They did things to me that after I was released from prison, I knew I would never be the same person again. They showed me things in my interrogations that I couldn't believe. They had many photos of me just walking down the street. They watched my every move. How can I trust anyone anymore?"

They wanted a video recorded confession from Naghmeh. The interrogators wanted her to say that she drowned herself in the virtual world and ruined her life. They promised to not release her confession to the public, they said they only wanted it for documentation purposes. They tortured Naghmeh for hours until she couldn't take it any longer and told them what they wanted to hear.

Naghmeh's trial was held in branch 28 of Tehran's Revolutionary Court with presiding Judge Moghiseh. She was accused of creating Facebook pages and spreading information about human rights violations in Iran. The judge sentenced her to seven years and 91 days in prison for propagating against the regime, insulting Ayatollah Khomenei (the founder and first Supreme Leader of the Islamic Republic of Iran) and insulting Ayatollah Khamenei (the current Supreme Leader). The court also issued outlandish prison sentences to her friends.

Naghmeh recounts the events at her trial: "Judge Moghiseh did not allow me or my friends to defend ourselves in court. They wouldn't even allow us to have lawyers. I was at the court from the morning, they would bring us one by one from Evin Prison. One of my friends tried to speak in court, but Judge Moghiseh threw a cup at him and told him that he is not supposed to talk. Why does a judge have to act this way? Aren't we supposed to defend ourselves in court? They treated us like this throughout the whole judicial process and even threatened to arrest the mother of one of my friends."

Naghmeh was released on bail on March 14, 2015, but she says that they summoned her to prison numerous times after. "My interrogator would phone and ask me whether I missed him. They even interrogated me for hours once after my release, they threatened to spin the information in my case file in such a way that the courts would issue me a death sentence. He told me that he could do whatever he wanted."

Out of fear for her safety Naghmeh decided to leave Iran with her children. Now an asylum seeker who is not among the known Iranian political prisoners, Naghmeh fears that her case will not receive global attention and she and her children will be left on their own. She says her life has been destroyed.

Naghmeh's husband left her side from the time she was arrested. She says that he was unable to cope with the possibility that she may be raped in prison. "I was threatened with rape and I lived with the fear of rape, but I was never raped." Naghmeh says the lack of understanding of her situation wasn't limited to her husband. "When I was released from prison, I was confronted by my family and friends. Anyone who saw me would ask me whether I was raped, rather than whether I was OK."
Share this
Follow us on Facebook