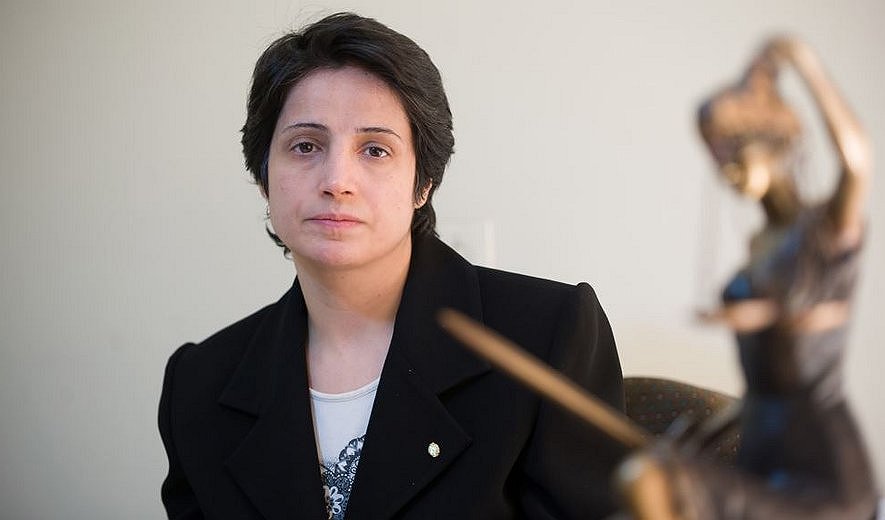 Iran Human Rights (Aug 16, 2018): Prominent lawyer and human rights defender, Nasrin Sotoudeh, was convicted in absentia and is sentenced to five years in prison on the charge of “espionage”. Hypothetically, if the crime was committed, the defendant should have been sentenced to six months to three years in prison. IHR has asked about the problems in Nasrin Sotoudeh’s trial in an interview with her lawyer.

According to a close source, Nasrin Sotoudeh was convicted in absentia and sentenced to five years in prison after an unfair trial. Three years ago an indictment was issued against her charging her with “propaganda against the state and forming groups against national security”, however, her sentence was for the charge of “espionage”.
Payam Derafshan, one of Nasrin Sotoudeh’s lawyers, told IHR, “According to the Criminal Procedure, the judge should try a case solely based on the indictment. If the indictment is defective, he should send the case to the prosecutor’s office to investigate it. [The judge] cannot try a case based on the subjects that are not included in the indictment. Judge Moghiseh didn’t pay attention to Nasrin Sotoudeh’s two accusations and mentioned Article 510 of the Islamic Penal Code which appertains espionage.”
According to Article 510 of Iran’s Islamic Penal Code, anyone who, with the intent to disrupt national security or aid the enemy, recognizes and hides, or assists in hiding spies who have a mission to gather information or cause damage to the country, shall be sentenced to six months to three years’ imprisonment.
He continued, “Based on what the system believes, any diplomat or tourist who visits Iran from a foreign country is a spy. There’s another problem with this case, that is, based on article 510 (which the judge has mentioned) the punishment for this crime is imprisonment from six months to three years, while it’s five years in the verdict!”
Derafshan added, “Mr. Behzadi (Nasrin Sotoudeh’s other lawyer) objected. When a verdict is issued in absentia, the court has to accept bail and when a verdict is reached, the defendant has to serve his/her sentence. However, Judge Moghiseh didn’t accept bail. And refused to send the indictment back for a review.”
Moreover, after Nasrin Sotoudeh’s objection against her five-year sentence failed, she was summoned by Branch 7 of the court in Evin because she was facing another case based on a complaint by a prosecutor in Kashan. Her lawyers don’t know the details of the case but they guess that she is charged with “action against national security”.
Later Nasrin Sotoudeh was issued bail set at 650 million Tomans but she rejected it. Two weeks later, she was summoned from the women’s ward and was charged with “forming LEGAM”. LEGAM (Ending Executions in Iran Step by Step) is a civil group and Nasrin Sotoude is one of its co-founders. She was also ordered a provisional arrest for this case.”
Nasrin Sotoudeh was arrested on June 13, 2018. Currently, Mahmoud Behzadi, Arash Keykhosravi, and Payam Derafshan are her lawyers.
Nasrin Sotoudeh was also arrested in September 2010 and sentenced to 11 years in prison, a twenty-year ban on her legal practice, and a twenty- year ban on foreign travel. An appeal court later reduced her sentence to six years in prison and a ten-year ban on her legal practice.