Death-row
Share this
Loqman Moradi’s mother and Zanyar Moradi’s brother were called and told to visit their prisoner at Rajai Shahr Prison on Friday. It is an extraordinary situation because prisoners are usually not allowed to have visitors on Fridays. 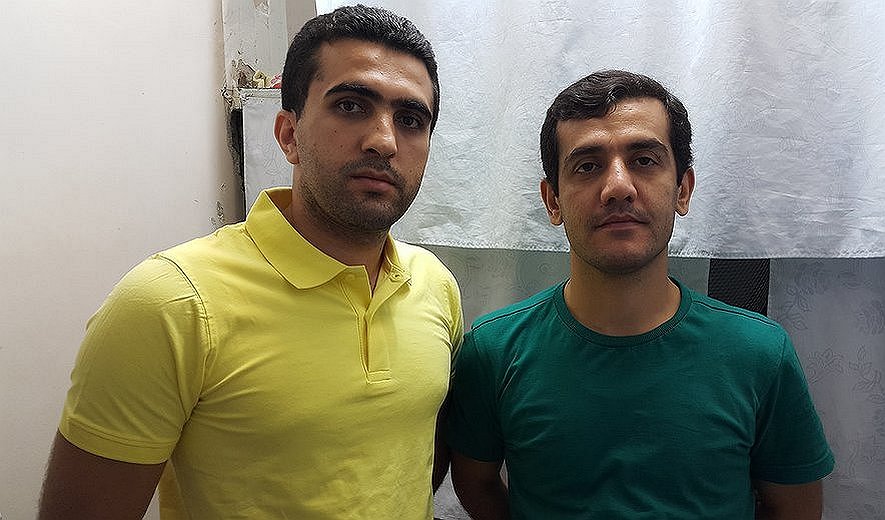 Iran Human Rights (Sep 6, 2018): Zanyar and Loqman Moradi’s families were called to visit them at Rajai Shahr Prison on Friday. The prisoners were transferred to the solitary confinement on Wednesday. Currently, in some non-political wards, the phones are disconnected.

According to a close source, Loqman Moradi’s mother and Zanyar Moradi’s brother were called and told to visit their prisoner at Rajai Shahr Prison on Friday. It is an extraordinary situation because prisoners are usually not allowed to have visitors on Fridays.

Zanyar Moradi and Loqman Moradi, sentenced to death, were called to the prison guard and transferred to the solitary confinement of ward 8, also known as “Sepah (IRGC) Ward". It is said that the Islamic Revolutionary Guard Corps and the Ministry of Intelligence jointly use this ward for security and political defendants.

Moreover, a close source told IHR, “The phones of most of the wards which are close to the political ward are disconnected.”

On the other hand, Ramin Hossein Panahi, another death-row prisoner, is currently held at the solitary confinement of the same prison and he is on hunger strike. The prison authorities had told him that he would be executed soon.

Human rights activists had earlier warned about the unannounced execution of these three prisoners on Saturday.

Zanyar Moradi and Loqman Moradi were arrested in Marivan by the agents of the Ministry of Intelligence of Sanandaj in July 2009. After a few months, they were sent to Branch 15 of the Revolutionary Court of Tehran, presided by Judge Salavati, where they were sentenced to public execution on the charge of “Moharebeh through action against national security, being a member of Komalah party, assassinating the son of Marivan’s Imam of Friday Prayer, spying for Britain, disturbing security at the time of the presence of the Supreme Leader in Marivan”.

The case of the prisoners was later sent to the Public Court and Branch 74 of the Criminal Court of Tehran handled their case. Some people decided to testify for Zanyar and Loqman Moradi and one of them told Marivan’s Imam of Friday Prayer that they didn’t kill his son.

One of Zanyar Moradi’s relatives had earlier told IHR, “At first, Zanyar and Loqman were transferred to the Ministry of Intelligence. During the first few weeks, they were only asked about the Komalah party and Zanyar’s father, who was a member of the Komalah party. Later they asked them about the assassination and tortured them mentally and physically so that they accept the accusation. They threatened them that they would arrest their families too.”

Zanyar Moradi’s father, who was a political activist, was shot and killed on July 18. Many activists believed that his murder was organized by Iranian security forces, although, there has been no evidence proving it.

Ramin Hossein Panahi, another prisoner in imminent danger of execution, was shot and arrested by the Revolutionary Guards of Sanandaj on Friday, June 23. The guards claimed that the defendant was armed, but the defendant’s family claimed otherwise. Ramin was sentenced to death on the charge of “Rebellion, action against national security, and being a member of Komalah”.