World Day 2018: More Than 207 Executed Since the Beginning of the Year in Iran 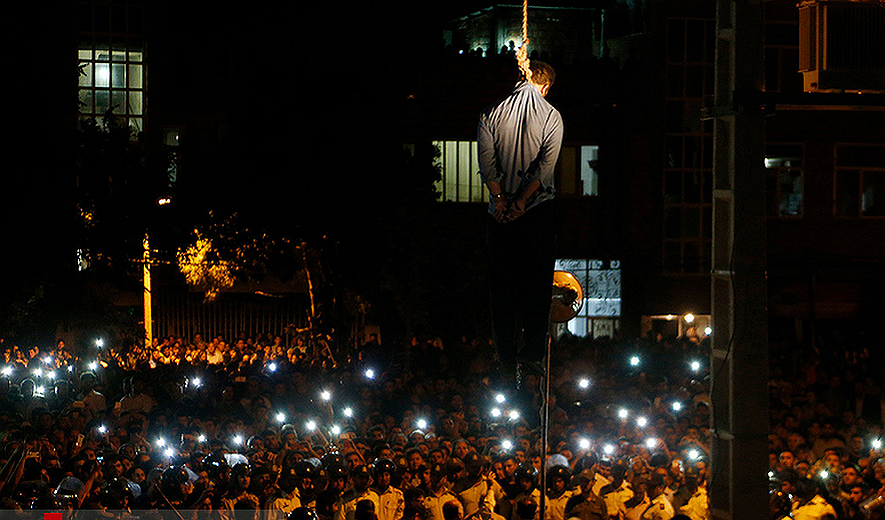 Iran Human Rights (IHR); October 10, 2018: According to statistics department of Iran Human Rights (IHR), Iranian authorities have executed 207 prisoners including 5 juvenile offenders between January 1 and October 10, 2018. This report is being published on the occasion of the 16th World Day Against the Death Penalty, which aims at raising awareness on the inhumane living conditions of people sentenced to death.

This year we celebrate World Day Against the Death Penalty while several human rights activists are in prison for their peaceful activities against the death penalty in Iran. Atena Daemi, Narges Mohammadi and Nasrin Sotoudeh are among them and are held in women ward at the Evin prison in Tehran.

On this day, Iran Human Rights (IHR) urges the civil society institutions as well as Iranian citizens to join the abolitionists' movement. IHR also calls on the international community to demand an unconditional end to juvenile and public executions and immediate release of imprisoned anti-death penalty activists. “These demands must be on top of the agenda in the bilateral and multilateral dialogue between the members of the international community and the Iranian authorities,” said IHR’s director, Mahmood Amiry-Moghaddam. He continued: “The death penalty is an inhumane punishment that dictators use to spread fear among the people in order to continue their rule. This inhumane punishment must not be tolerated by the international community”.

According to reports by IHR, so far in 2018, at least 207 prisoners have been executed in Iran but only 75 cases were announced by the official Iranian media. 20 prisoners, as well as three Kurdish political prisoners, have been executed on Moharebeh (waging war against God) charges, 8 on drug-related charges, 155 on murder charges (qisas or retribution in kind) and 21 for rape. In the same period of time in 2017, 437 execution were registered by the IHR statistics department, 221 of which for drug offenses.

However, Iranian authorities continue executions for other charges and Iran remains the biggest executioner of juvenile offenders also this year.

Most of the juveniles executed by the Iranian authorities are charged with murder. According to the Iranian Islamic Penal Code, murder is punishable by qisas (retribution in kind). Iranian authorities use Islam as a pretext to continue the execution of juvenile offenders and consider any objection against the death penalty as the protest against Islam.

In 2013, Sadeq Larijani, head of the judicial system of Iran, said, “as per our previous announcements, most of the claims about violation of human rights in Iran, including opposition against the death penalty, is indeed opposition to Islam. Qisas (retribution in kind) is the direct order of Quran.”

Iran is among the few countries in the world that issues the execution verdict for minors. So far in 2018 at least 5 juvenile offenders have been executed in different Iranian prisons. Iran Human Rights (IHR) has identified them as “AmirHossein Pourjafar, Ali Kazemi, Mahboubeh Mofidi, Abolfazl Chezani Sharahi, and Zeinab Sekanvand.” The aforementioned juvenile offenders were executed while under Article 91 of the Islamic Penal Code which was added to the law 5 years ago, allows judges to issue alternative verdicts for the minors whom the judge considers not mature enough to realize the nature of the crime committed. However, the article could neither stop nor even decrease the execution of juvenile offenders. Since the application of article 91, at least 35 juvenile offenders have been hanged in Iranian prisons.

In this regard, more orchestrated pressure on Iranian government from international institutions, human rights organization and countries with diplomatic relations with Iran, is needed to force Iranian authorities to unconditionally abolish the death penalty for offenses under 18 years of age.

Iran Human Rights (IHR) has been a member of the World Coalition Against the Death Penalty (WCADP) since 2009 and an elected member of its Steering Committee since 2011.

In 2002, WCADP announced 10th of October of each year as the World Day Against the Death Penalty. The Coalition consists of more than 140 members from five continents.