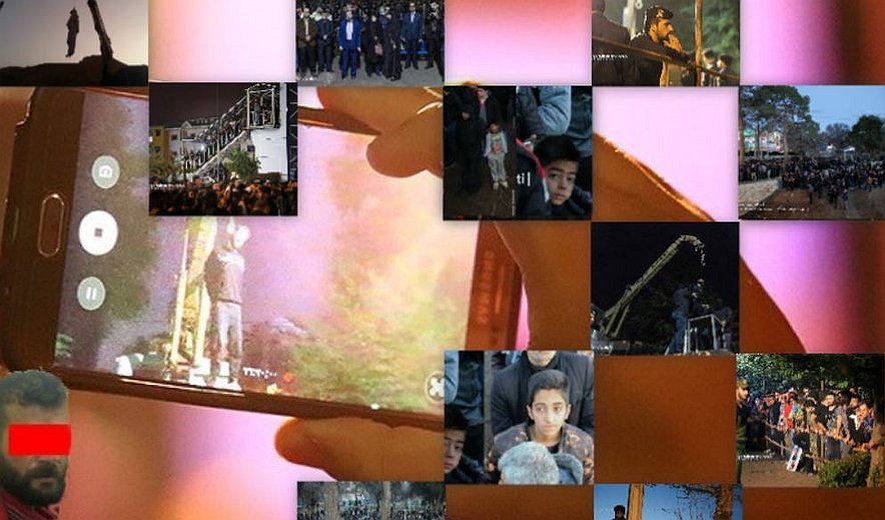 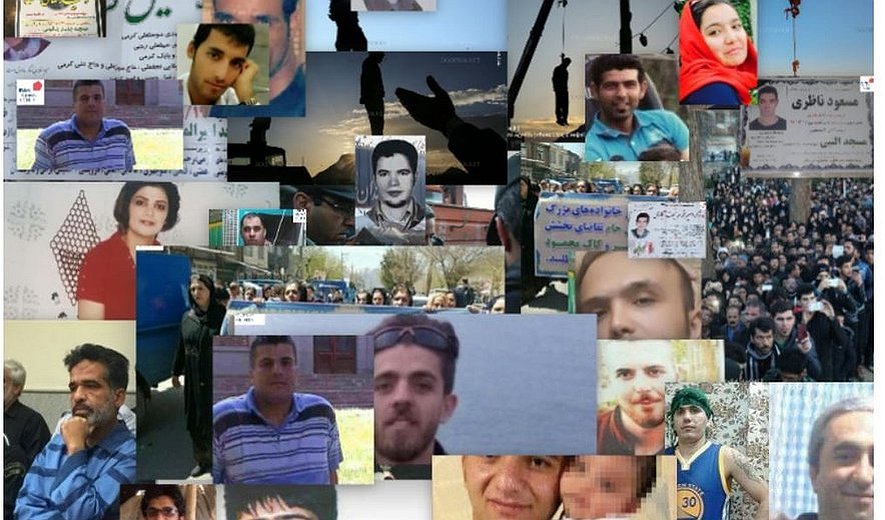 Iran Human Rights (IHR): The 12th annual report on the death penalty by Iran Human Rights (IHR) and ECPM (Together Against the Death Penalty) provides an assessment and analysis of the death penalty trends in 2019 in the Islamic Republic of Iran. It sets out the number of executions in 2019, the trend compared to previous years, the legislative framework and procedures, charges, geographic distribution and a monthly breakdown of executions. Lists of the female and juvenile offenders executed in 2019 are also included in the tables.

The report also looks into the abolitionist movement within Iran, including the forgiveness movement and its contribution to limiting the use of the death penalty, the artists and filmmakers attempting to promote abolition, and the authorities’ attempt to promote the death penalty and crackdown on human rights defenders.

In this article, you will read a section of the report regarding Qisas (retribution in-kind) for murder in Iran in 2019.

For references and more, see the Annual Report of the Death Penalty in Iran (pdf)

Qisas refers to retribution in kind. Qisas death sentences have been retained for murder in the new Iranian Islamic Penal Code (IPC). As murder is specifically punished under qisas, the Penal Code of Iran does not specifically state that convicted murderers are subject to the death penalty but rather to qisas which means “retribution in kind” or retaliation. The State effectively puts the responsibility for executions for murder on the shoulders of the victim’s family. Qisas death sentences are also imposed for juvenile offenders as, according to Sharia, the age of criminal responsibility for girls is 9 and for boys 15 lunar years. In addition, under the IPC, the death penalty is generally subject to discriminatory application based on gender and religion (see page 18 of the pdf).

In addition to the inequality of citizens before the law, there are many reports on the violation of due process in qisas cases. Use of torture to extract confessions and hasty trials without sufficient time to conduct independent investigation of the evidence are examples of such practice.

• 68 qisas executions were carried out in one prison;

• 4 people executed were juveniles (under 18 years of age) at the time of offence;

• 15 people among those executed for murder charges were women;

• 6 people were hanged in public.

The detailed geographical distribution of qisas executions will be provided in the section “Forgiveness movement” on page 36 of this report. However, the reports in the last five years show that a significant portion of all qisas executions every year are carried out in one single prison in the Alborz/Tehran area. Rajai Shahr prison (previously known as Gohardasht) has in addition been the site of the execution of many political prisoners, especially those belonging to banned Kurdish political parties. In 2019, at least 68 qisas sentences were carried out in Rajai Shahr prison. This counts for 30% of total qisas executions and 24% of all executions for all charges in the country.

In a report published by IHR the World Day Against the Death Penalty, the last hours of a death row prisoner at Rajai Shahr Prison is described.

EXECUTION OF A WOMAN WITH POSSIBLE MENTAL DISABILITY

On July 17, 2019, the Islamic Republic News Agency (IRNA) published a news piece about the execution of a 43-year-old woman. She was sentenced to qisas for murdering a five year-old boy in northern Iran.88 IHR sources revealed the identity of the woman as Zahra Safari-Moghaddam. Quoting the woman, IRNA stated that she had been under stress when committing the murder. Sources told IHR that Zahra was suffering from a mental disability.

MILAD DARZADEH AND REZA SARANI: QISAS OR RETALIATION FOR A SUICIDE ATTACK?

Milad Darzadeh was sentenced to qisas for murder. However, his family were trying to win the consent of the plaintiff for his release. In qisas cases, the plaintiff has the possibility of forgiving or demanding diya (blood money).

However, a day after a suicide attack on an IRGC bus and the death of 27 Revolutionary guards by the Sunni Baluchi group Jaish A-Adl on February 14, 2019, the authorities suddenly executed Milad Darzadeh who was also a Sunni Baluchi but without any connection to the group.

Reza Sarani who was also executed on the same week in Sistan and Baluchistan province for murder charges, was disabled following a stroke.

A QISAS CASE: CHILDREN AGAINST THEIR MOTHER

According to IHR sources, on the morning of July 23, 2019 two women were hanged for murder charges at Urmia prison, West Azerbaijan province. IHR could identify them as Arasteh Ranjbar and Nazdar Vatankhah. They were held in prison for 15 years before the execution was carried out.

This means the children of the victim agreed to the execution of their own mother and aunt after 15 years in prison. In this way, the State has put the pressure of killing a mother and aunt on the shoulders of children. This could have serious psychological consequences and contribute to the spread of violence throughout society.

A QISAS CASE: UNCLE AGAINST HIS NEPHEW

On April 27, 2019, death-row prisoner Nourollah Zanganehvandi was executed at the Iranian

western city of Kermanshah’s prison. He was in prison for seven years for murdering his

cousin. His maternal uncle was the plaintiff and refused to give his consent. Thus, the nephew was hanged at the age of 38. He was the father of two young children. 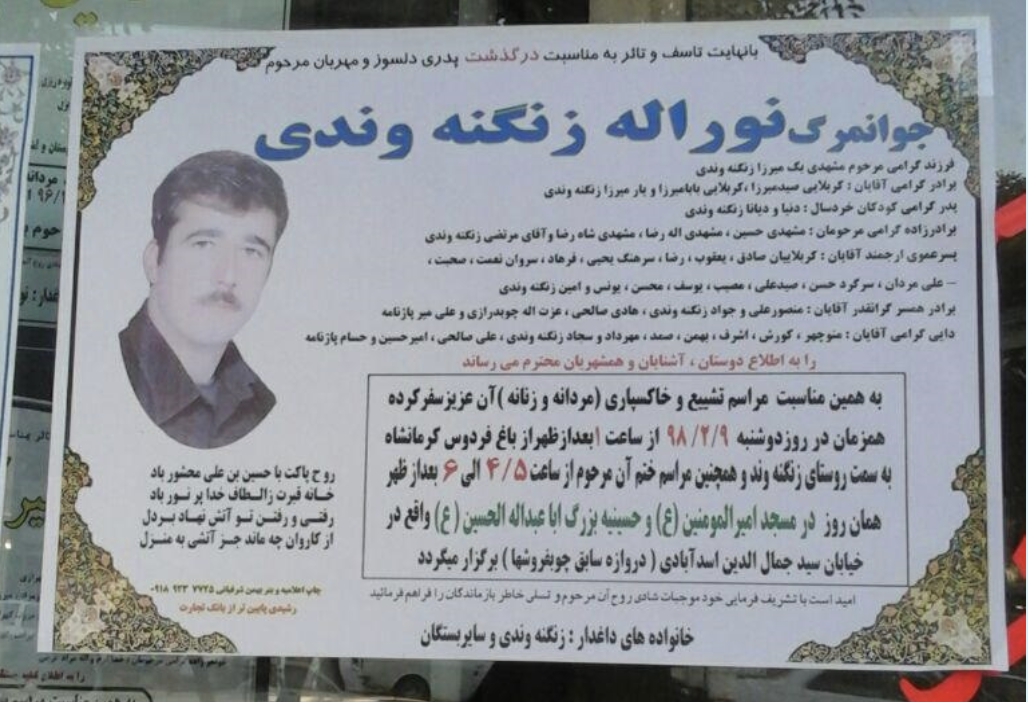 “I HAD NO INTENTION OF KILLING, JUST PUSHED THE VICTIM”

According to a report of the Kurdistan Center for Democracy and Human Rights, confirmed by IHR, death-row prisoner Shahin Samadi (34) was hanged at Iranian northwestern city of Maragheh’s prison on May 4, 2019.

Shahin emphasized in court that he only pushed the victim and had no intention of killing him. The victim’s head hit a hard metal object on the floor and died eventually. However, Shahin was sentenced to qisas and the court did not take the intention into consideration.

According to the Iranian Penal Code, murder is punished by qisas (retribution) where the family of the victim can demand a retribution death sentence. But they can also demand blood money (diya) instead of a death sentence or can simply grant forgiveness. 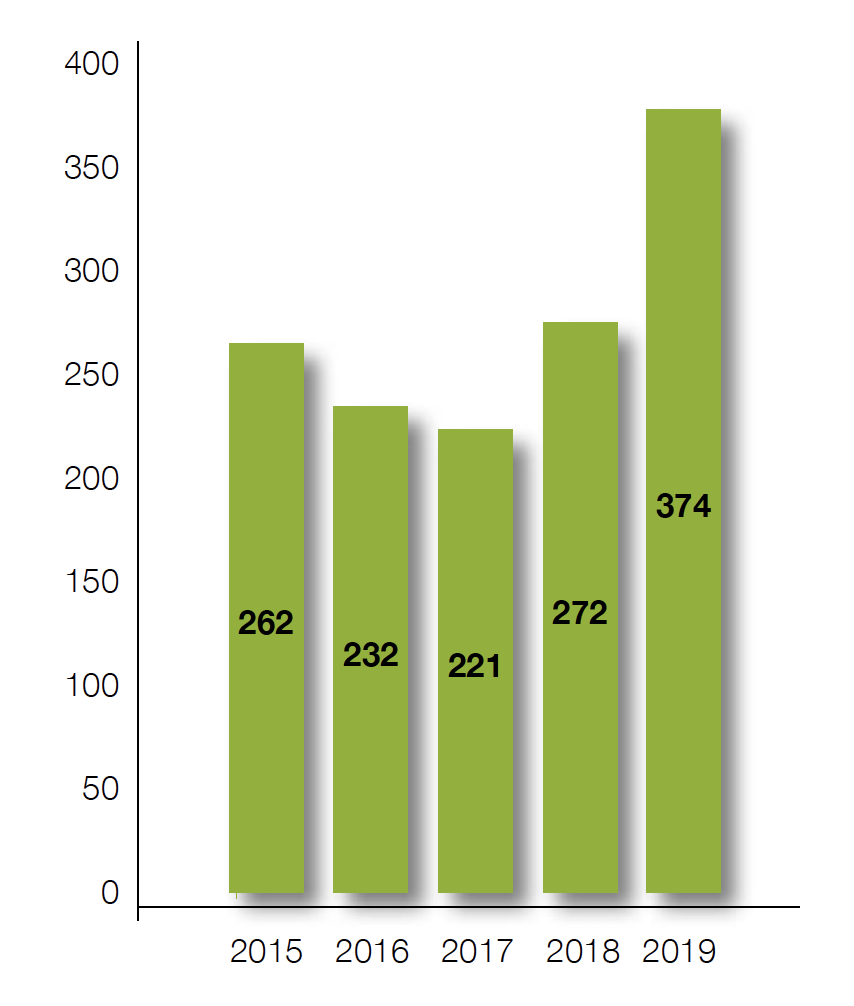 IHR has collected forgiveness reports since 2015. Altogether, the reports gathered in the past four years show that the families of murder victims who chose forgiveness or blood money for murder convicts outnumber those who chose the death penalty.

For the sake of simplicity, we will use the term forgiveness in the following section, regardless of whether there has been a demand for blood money or not. 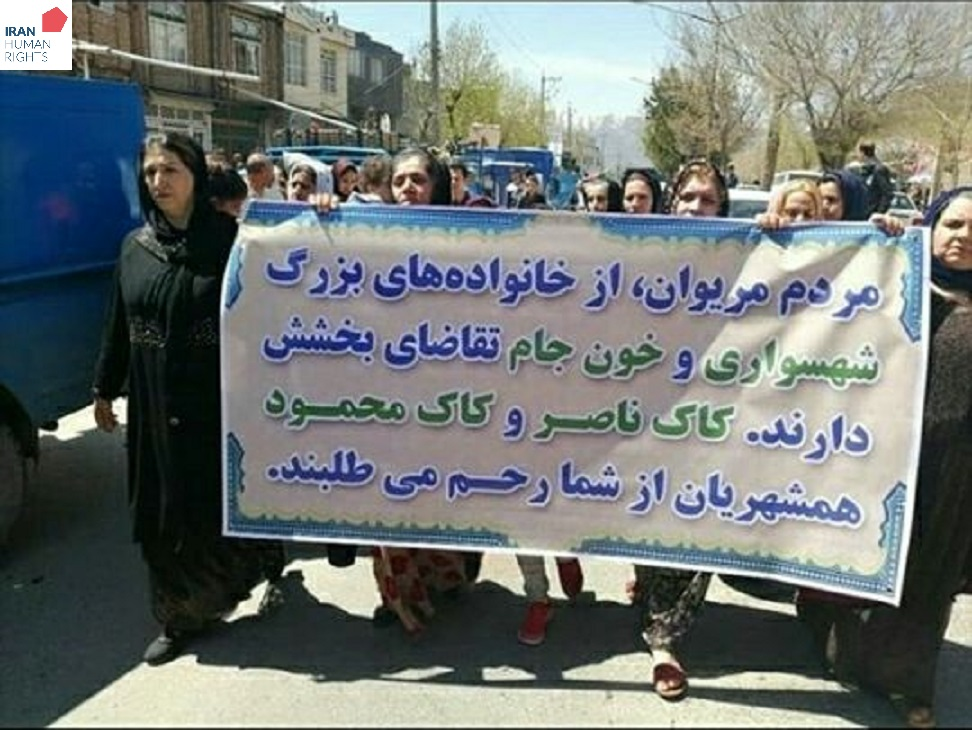 The following diagrams based on IHR reports show a comparison between documented forgiveness and retribution trends in Iran. 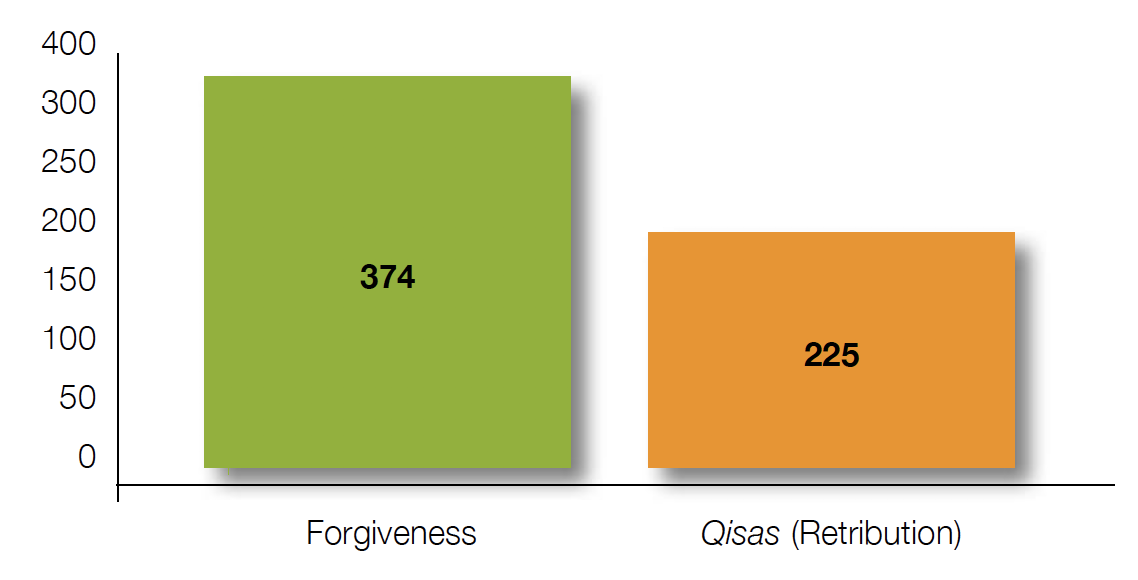 Diagram showing the number of implemented retribution death sentences and forgiveness cases in 2019.

Prisons in the Tehran and Karaj (Alborz) area were the sites of the highest number of both forgiveness and qisas cases in 2019 in Iran. 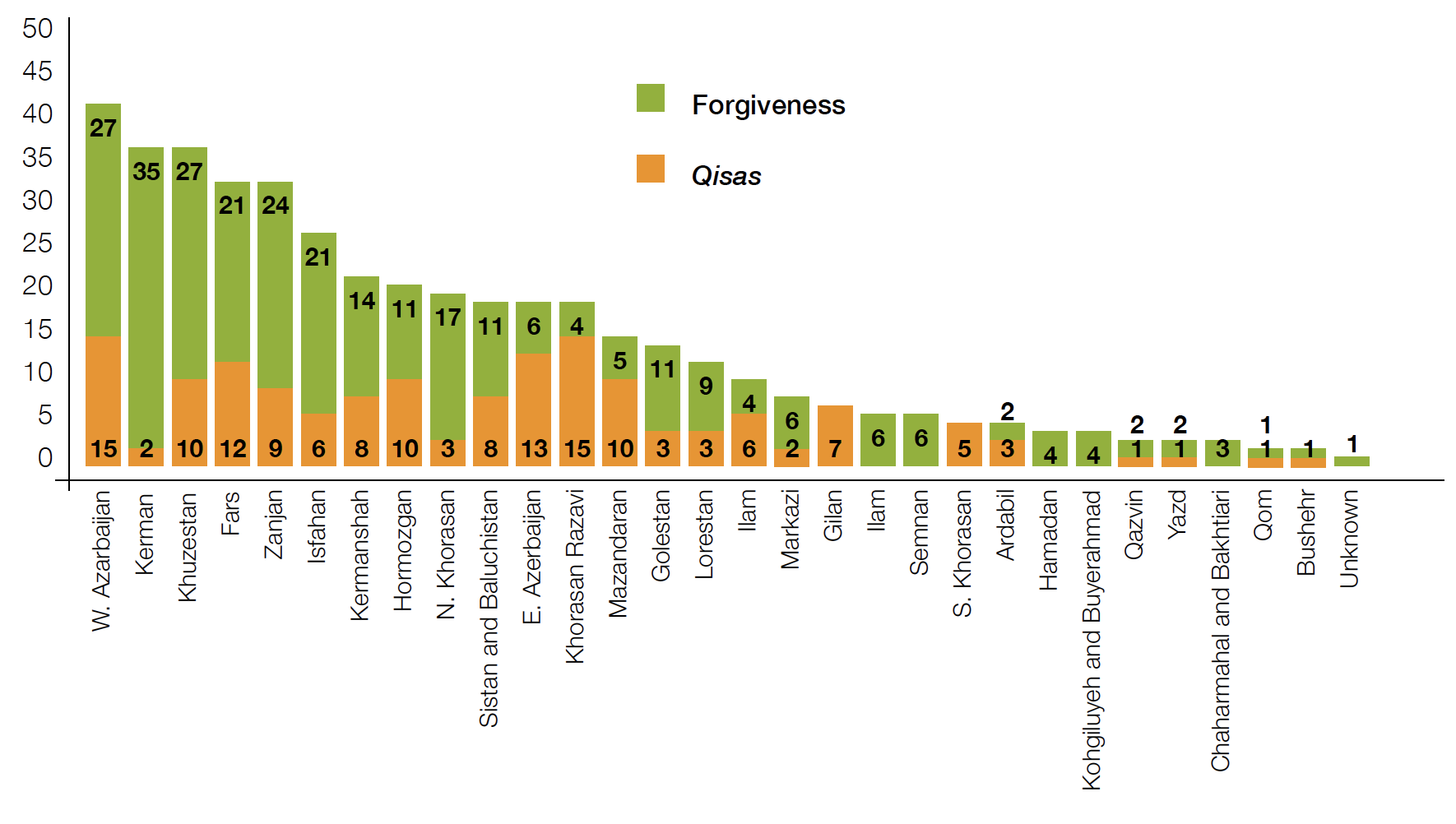