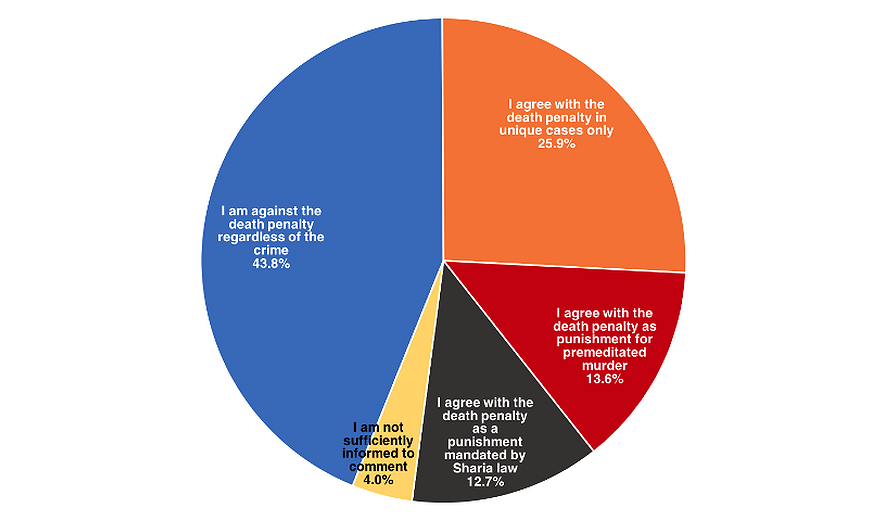 Iran Human Rights (IHR); October 12, 2020: A survey conducted in Iran during the month of September 2020 reveals that 70% of Iranians either oppose the death penalty completely (44%) or agree with it only in unique cases (26%).

This survey, conducted by the GAMAAN Institute between the 3rd and the 11th of September 2020, includes responses from about twenty thousand people living inside Iran. The findings can be generalized to the whole population of literate Iranian residents above 19 years old, who account for 85% of the total adult population of Iran.

Also, according to this survey:

Iran has the greatest number of executions after China. Under the Iranian penal codes a wide range of offences are punishable by the death penalty. The list includes murder, rape, armed robbery, possession and trafficking of narcotic drugs, espionage, economic corruption, affiliation with armed opposition groups, insulting the Prophet, blasphemy, same-sex intercourse, adultery and being sentenced for drinking alcohol for the fourth time. Iran is also one of the only countries retaining public executions and the death penalty for juvenile offenders.

Mahmood Amiry-Moghaddam, Director of IHR, observed,  “This survey indicates that, contrary to official assertions, Iranian authorities’ death penalty policy doesn’t have the support of the people. The vast majority of Iranian people want to put an end to public executions and the death penalty for child offenders, and they prefer alternative punishments even for serious crimes such as murder. The international community must echo the Iranian people’s voice and call on Iranian authorities to implement fundamental reforms in order to make a significant move toward the abolition of the death penalty.”

According to IHR reports, a majority of people executed in Iran since 2017 had been convicted of murder and sentenced to death under the legal principle of qisas (retribution in kind). Iranian authorities assert that qisas is the right of the plaintiff (the victim’s family) and that most qisas executions take place upon request of the plaintiff.

However, when questioned about their preferred punishment if an immediate family member were murdered, only 21.5% of respondents chose qisas (death penalty as retribution), while more than 50% preferred alternative punishments such as imprisonment.

"Although a State’s obligation to respect human rights should never be subject to popular vote, the results of this survey clearly indicate that public acceptance of capital punishment in Iran is nuanced, with a significant portion of respondents opposed to the death penalty regardless of the crime”, affirmed the WCADP president, Kevin Rivera-Medina.

“Iranian authorities, eager to keep the death penalty, are quick to point out that they are carrying out the will of the people, claiming that the death penalty is fair and mandated by Sharia law. However, with only 14% of respondents agreeing with such a statement, it is evident that the Iranian government’s inaccurate assertions about public opinion are merely pretext for ongoing human rights abuses. Now, more than ever, the Iranian government should heed the Iranian people’s call to abandon qisas and take positive steps to reduce the scope of the death penalty on its territory. Such steps would both reaffirm these views and recognize the worldwide principle of respect for human life", added Rivera-Medina.

On publication of this survey, the WCADP and IHR call for an immediate moratorium on the use of death penalty and the implementation of serious penal reforms limiting the use of the death penalty as a step towards its total abolition in Iran. Iranian authorities’ reforms implemented in the Anti-Narcotic Law in 2017 have significantly reduced the number of executions. But Iran’s execution numbers are still among the highest in the world.

All results, diagrams, and tables presented here are based on the “weighted sample” extracted from respondents inside Iran. The findings can be generalized to the whole population of literate Iranian residents above 19 years old, who account for 85% of the total adult population of Iran, with the respective credibility intervals and credibility level of 5% and 95% (which replace the margin of error and the confidence level in online non-probability surveys). 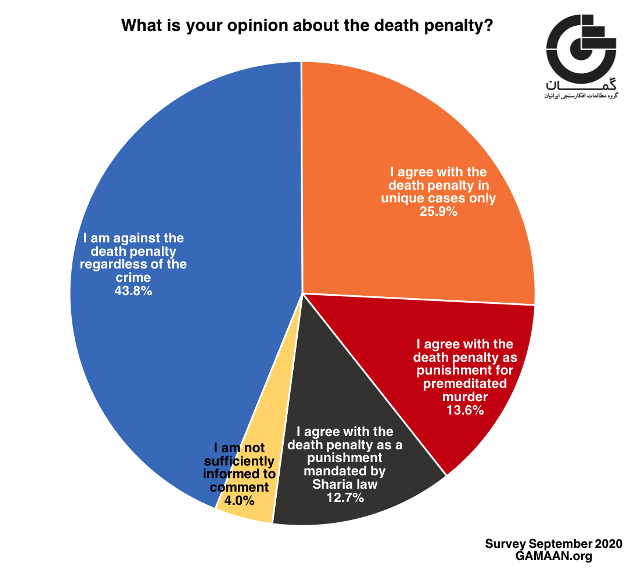 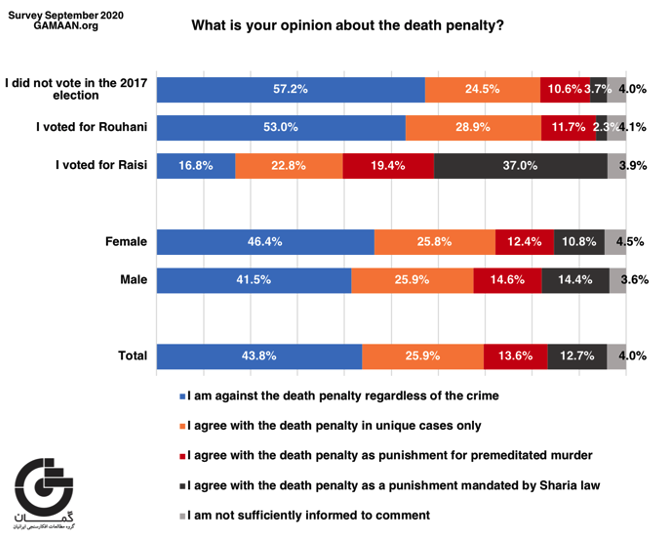 Respondents were asked in which cases they agreed with the possibility of the death penalty and could choose multiple options.

About 14% of the population agree with the death penalty as a punishment mandated by Sharia law (for crimes such as apostasy, blasphemy, and adultery). 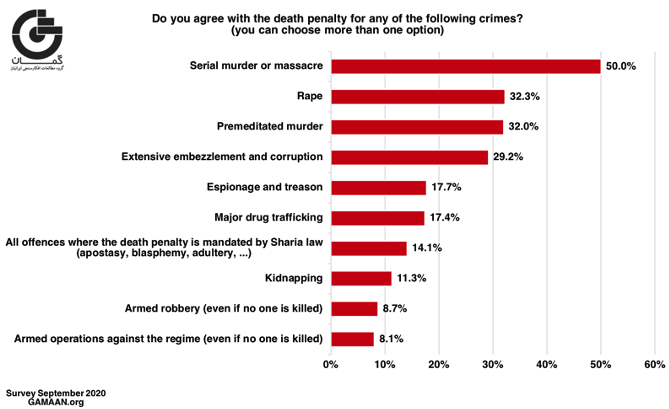 Respondents were asked their opinion on various death penalty-related statements.

Moreover, 62% believe that the judiciary should set the type and length of punishment for murder, not the victim’s family. 46% of the population also think that the right to life should not be taken, even if the person has committed a crime.

On the other hand, 85% oppose the death penalty for offenders who were under the age of 18 at the time of committing an alleged murder, and 84% agree that the punishment and diyah amount (blood money) should not depend on the victim’s sex (male or female). 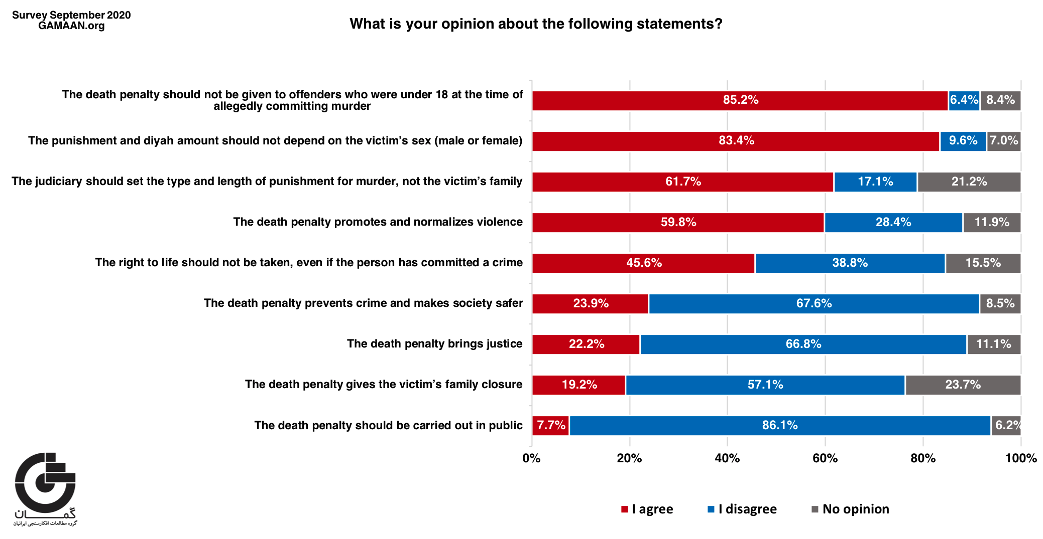 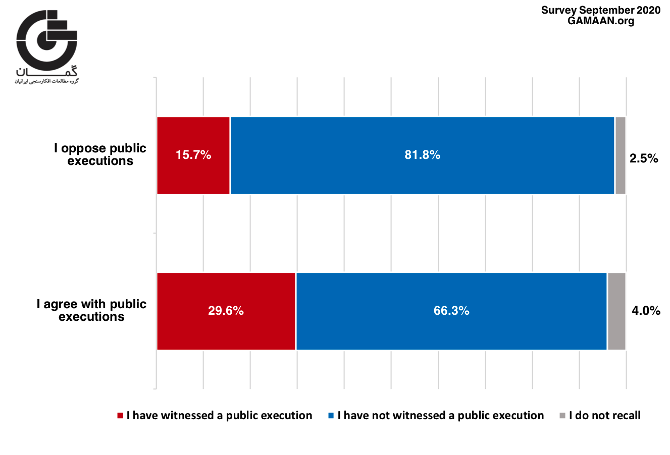 In response to the question, “If a member of your immediate family was murdered, which punishment would you prefer for the murderer?” about 48% of the population selected a life sentence or long-term imprisonment (Figure 6), while 5% preferred to receive the diyah (blood money) and forgive.

In contrast, about 22% chose execution or qiṣāṣ (retribution-in-kind) and about a quarter said they “don’t know” which option they favor. 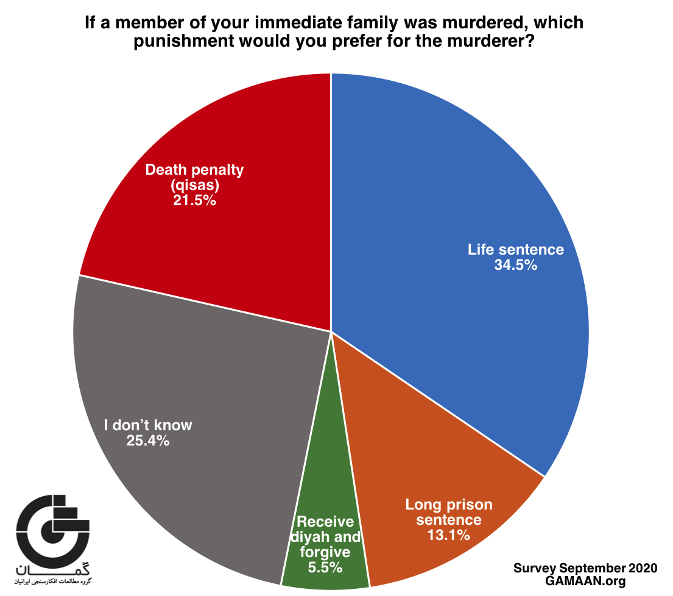 Respondents were asked what kind of punishment they agree with during a transition from an authoritarian regime, to punish the perpetrators of massacres in the previous regime. Figure 7 shows that about one-third of the population disagrees with the death penalty, even if perpetrators are found guilty in a fair trial. About 5% favor a general amnesty (‘afv-i umūmī) and the formation of a truth commission (kumītah-hāy-i ḥaqīqat-yāb).

In contrast, about a third think that perpetrators of massacres should be sentenced to death, as long as they are given a fair trial. About 7% agree with the revolutionary execution of the former regime’s officials.

A quarter suggest that legal experts should be responsible for deciding on the best form of transitional justice. 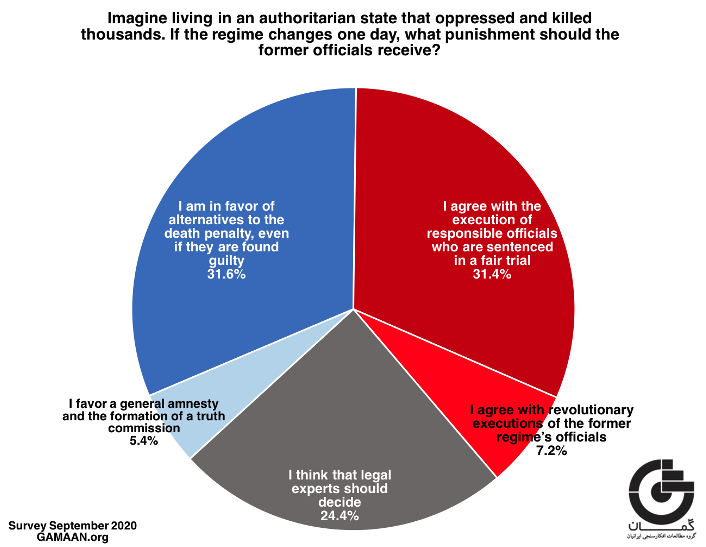 A majority of 69% believe that the people should be the final arbiter of the existence or abolition of the death penalty in Iranian law (Figure 8), to be determined in a public referendum.

About 17% chose an elected parliament as the final decision-making body, and about 14% think that religious authorities should decide on the abolishing of the death penalty in an Islamic country. 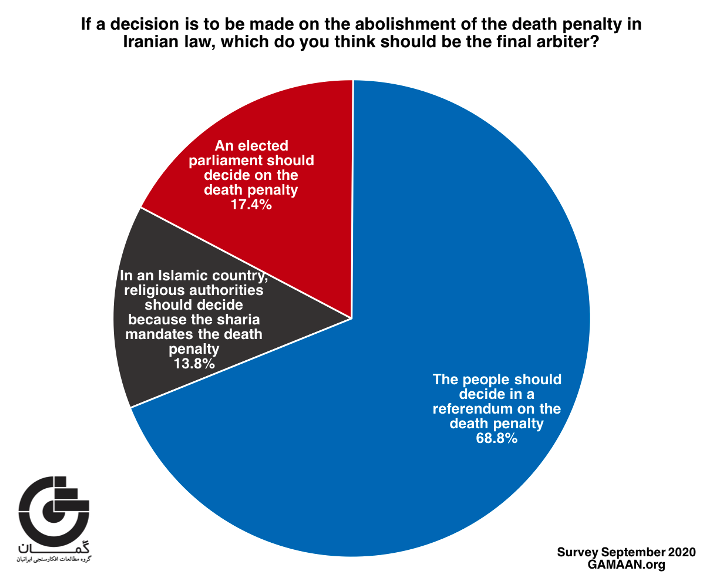 For other details and methodology of the survey, please see the full report (pdf)