Reports, Iran Human Rights, Human Rights Defenders
Share this
The 53 HRDs profiled in this report, are but a small representation of all HRDs who have faced harassment or have lost their freedom during the reporting period 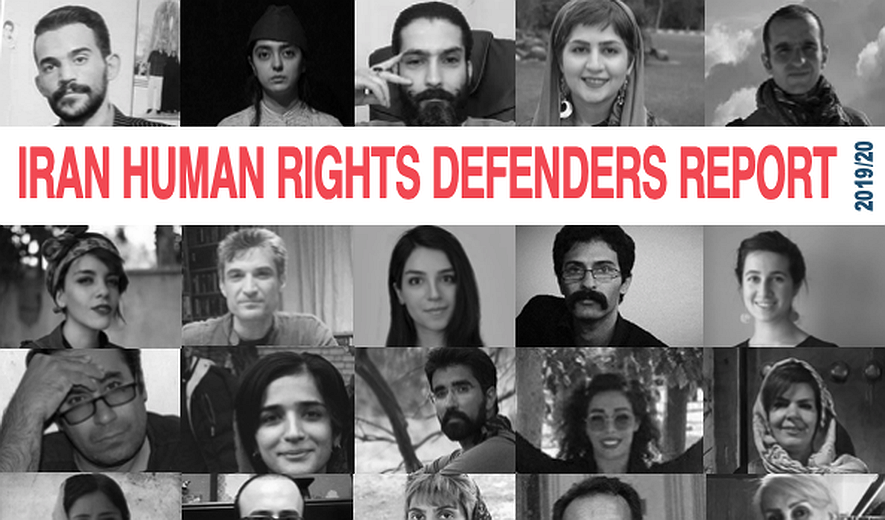 The situation of Human Rights Defenders (HRDs) in Iran is more grave today than it has been the last three decades. The Iran Human Rights Defenders Report 2019-2020 provides a brief account on the situation of 53 HRDs. They are lawyers who were defending their clients; trade union members claiming their legal rights, environmentalists working to preserve wildlife; child rights activists -- among many others.

The report shows that most HRDs have been subjected to persecution, detention and long prison sentences solely for practicing their freedom of expression - a right afforded to them by international human rights conventions, as well as the Iranian Constitution.

Commenting on the report, Iran Human Rights Director Mahmood Amiry-Moghaddam underscored that “the intensified crackdown on human rights defenders has gone beyond just those criticising the human rights violations committed by the authorities, but now essentially includes anyone who, even within the legal framework of the current establishment, has taken a step towards protecting human rights. The situation of HRDs in Iran is critical and demands urgent international attention.”

53 HRDs, who have collectively been sentenced to nearly 400 years of imprisonment and 787 lashes, are profiled in this report. In addition, all have been subjected to a wide range of violations. Several of them, of instance, have been fired from their jobs or banned from practicing their profession. All the HRDs have been subjected to unfair trials with gross violations of their due process by the Revolutionary Courts. Economic pressure and threats to family members are among the ways that the authorities systematically use to silent the HRDs.

HRDs have been subjected to solitary confinement, placed under duress and coerced to give televised confessions, and psychologically and physically tortured. HRDs like workers rights defender Esmaeil Bakhshi who wrote of his time in prison: “I was tortured to near death and punched and kicked to the point that I could not move for 72 hours, and they beat me so much that it was painful for me to even sleep. After almost two months passing since those difficult days, I still feel pain in my broken ribs, kidneys, left ear and testicles.”

The lack and denial of medical care, overcrowding, unsanitary conditions, as well as keeping HRDs with prisoners convicted of serious crimes such as murder, are other systematic methods of pressuring HRDs. Some suffer from serious medical conditions; several have been diagnosed with COVID-19, yet remain behind bars.

One of the most alarming patterns over the past two years, has been the crackdown on lawyers who have represented political, minority and security cases. Lawyers like Amirsalar Davoudi, who was arrested and sentenced to 30 years in prison and 111 lashes in relation to his Telegram channel “No Retouch”, where he discussed breaches in judicial processes, the judicial harassment of lawyers and human rights abuses.

Women’s rights defenders have also been persecuted in large numbers. In the past few years, increasing numbers of women have joined the movement against the compulsory hijab. A fundamental right, taken for granted elsewhere, lands women in Iran heavy prison sentences. Women like Saba Kordafshari, a then 22-year-old woman who was arrested for taking off her head covering in public and is currently serving a 24-year sentence. Days before the publication of this report, Saba’s request for a retrial was rejected. Also incarcerated - but in a different prison - is her mother, Raheleh Ahmadi, who seeking justice for her daughter and standing against the compulsory hijab in her own right, was also arrested and sentenced to 31 months in prison.

The 53 HRDs profiled in this report, are but a small representation of all HRDs who have faced harassment or have lost their freedom during the reporting period. It is thus our hope that this effort will provide new insights into the deteriorating state of human rights in the country, offer accurate information to researchers and journalists, and assist human right defenders and concerned citizens around the world in educating and informing about the fortitude of ordinary Iranians, seeking to improve the lives of others, at their own risk.

Through its publication, Iran Human Rights calls on the international community and all states with diplomatic relations with Iran, to demand the immediate release of all imprisoned HRDs. We also call upon civil society and members of the public all over the world to read their stories, learn their names, and join us in not only demanding their freedom and that of all HRDs, but also amplify their voices demanding basic fundamental rights for all Iranians.