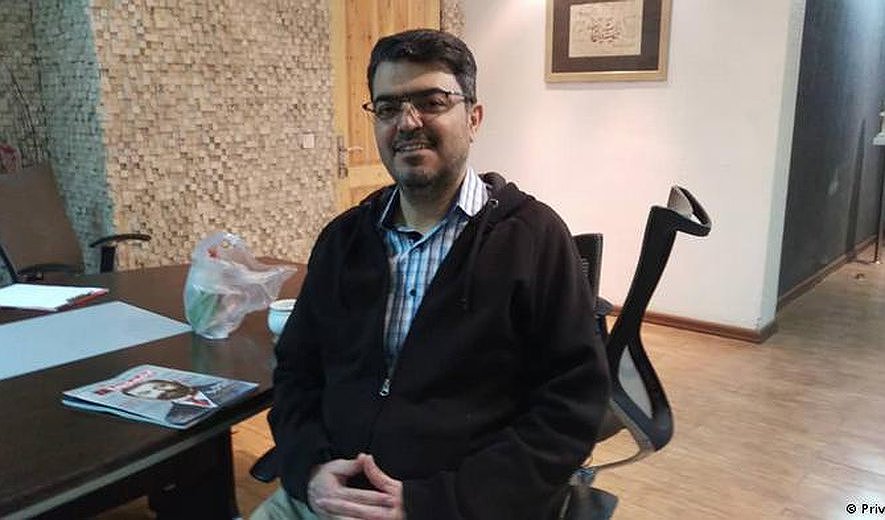 Iran Human Rights (IHR); March 17, 2021: Human rights defender and former Secretary General of the Teachers’ Union of Iran, Esmaeil Abdi was taken out of Evin Prison to be transferred to Rajai Shahr Prison on March 13, but after being moved around between police detention centres, has ended up in room 4 of the Evin Prison quarantine in unsuitable conditions.

Esmaeil’s wife, Monir Abdi told Iran Human Rights that prison officials had told her husband that he will remain in quarantine at Evin Prison until “his situation is determined, which may take days. Following recent transfers of other human rights defenders and political prisoners from Evin Prison, human rights sources had previously announced that Esmaeil had been transferred from Evin to Rajai Shahr Prison.

According to the Coordination Council of Iranian Teachers’ Association Telegram channel, the union activist was transferred out of Evin Prison on March 14 without a prior court order or any requests from Esmaeil or his family and were forcibly transferring him to Rajai Shahr Prison.

Informed sources say that at the time of his transfer, Evin Prison officials had said that the transfer was taking place “on the orders of the Tehran Prosecutor.”

Monir however, says that Rajai Shahr Prison officials were looking for an excuse to refuse his entrance: “Instead of transferring Esmaeil there in a Security Prison Surveillance Unit car, they transferred him in a blacked-out Nissan with no seats belonging to the Prevention and Special Transportation Unit for Dangerous Prisoners, which the Rajai Shahr Prison officials used as an excuse to refuse entry to the prison.”

“Following Rajai Shahr Prison’s refusal to accept my husband, he was kept in the 14 Resalat police station in Karaj overnight without heating, blankets and with several other prisoners, including one that had committed murder,” she continued.

According to Monir, her husband had been “in handcuffs for two days and nights” before being transferred back to Evin Prison. Meanwhile, the Evin Prison prosecutor has so far refused to provide Esmaeil’s family with any clear answers.

“On Sunday, March 15, my husband was transferred to the Judgment Enforcement Unit of Branch 10 of the Karaj Public and Revolutionary Prosecutor's Office. There, the judge again ordered his return to Evin Prison. They arrived at Evin Prison at around 3-4 pm, but since the courthouse was already closed, they refused to admit him again," Monir told IHR.

Esmaeil was held in police detention until a letter confirmation was sent from an on-duty judge at Evin Court on Monday, March 16. While in custody in Karaj, a judicial official named “Ms Babaei” used insulting language to threaten to have Esmaeil exiled to a prison in Sistan and Baluchistan.

Prior to his transfer, Esmaeil Abdi was on a three-day hunger strike to protest the ban to make phone calls to his family. On March 8, the human rights defender was transferred from Ward 8 to Ward 6 of Evin Prison under the pretext that he had “made a speech and sung a song at a memorial service for the late political prisoner Behnam Mahjoubi” without any consideration for the principle of the separation of crimes in prison. He was also banned from making any phone calls to outside prison.

While Esmaeil has a long list of arrests dating back to 2007, he was arrested again on 19 May 2010 and sentenced to 10 years in prison by Judge Pirabbasi on charges of “propaganda against the system” and “links to enemy states” which was suspended. He was arrested again in 2015 by the IRGC Sarallah forces and spent 10 months in detention, before being released on a bail of 300 million Tomans. He was sentenced to six years in prison on charges of “propaganda against the system and assembly and collusion against national security” by Branch 15 of the Tehran Revolutionary Court, presided over by Judge Salavati. He was arrested at his home on 9 November 2016 to serve out his sentence. In May 2020, when he went to renew his furlough at the Evin prison, he was informed that the previous 10 year suspended sentence had been re-opened and was being enforced.

In recent weeks, several human rights defenders and political prisoners have been transferred from Evin Prison in Tehran to prisons in other cities. Mojgan Keshavarz, Sepideh Farhan, Sakienh Parvaneh, Nasrin Sotoudeh, Maryam Akbari-Monfared, Sepideh Gholiyan, Golrokh Ebrahimi-Iraei and Atena Daemi are among the recent political prisoners to have been “exiled” from Evin Prison to Qarchak and remote prisons in Quchan, Semnan and Rasht.

Mohammad Moghimi, a lawyer who has represented several political prisoners in recent years including human rights defenders Mojgan Keshavarz and Nasrin Sotoudeh, told IHR that exiling prisoners is a violation of some for their most basic rights.

He says: "According to Article 36 of the Constitution of the Islamic Republic of Iran, the sentencing and its implementation should be only through a competent court and in accordance with the law. Therefore, the implementation of sentences must also be in accordance with the law and by a competent court. A competent court also means a judicial authority and a court authorised by the legislature to make decisions within the law. Since the law does not provide for the prison exile of a prisoner for any reason, it is unlawful to transfer prisoners to prisons such Qarchak, which could result in disciplinary action and even criminal liability under Article 570 of the Islamic Penal Code.”

According to the lawyer, one of the consequences of exiling political prisoners from Evin to other prisons is a violation of the principle of separation of crimes: "According to the principle of separation of crimes, different crimes, especially political and security prisoners, should be kept in separate wards. The Criminal Procedure Code approved by the head of the judiciary in 2006 also recognises this principle. Unfortunately, some judges or officials, such as the head of the prisons, exile political prisoners in order to punish or harass them, in violation of the above-mentioned principles and regulations, including Atena Farghdani, Mojgan Keshavarz and Nasrin Sotoudeh, who were my clients."

Mohammad Moghimi believes that custodial sentences in general have many disadvantages and the world today is looking for alternative punishments to imprisonment: "One of the  harms it causes is the violation of the principle of the individualisation of punishment. In fact, in addition to the individual, their family may also be punished. For example, the imprisonment of the father of the family has negative material and spiritual consequences for the whole family. Therefore, in the case of exiling a prisoner to a remote prison which makes family visitations difficult or impossible, there is certainly a double breach of the principle of the individualisation of punishment.”