Narges Mohammadi: Violence of Death Penalty is Worse Than War

IranReport2020
Share this
hope that anti-death penalty organisations will pay special attention to the detainees, because I fear that we will be facing another wave of executions over the coming year 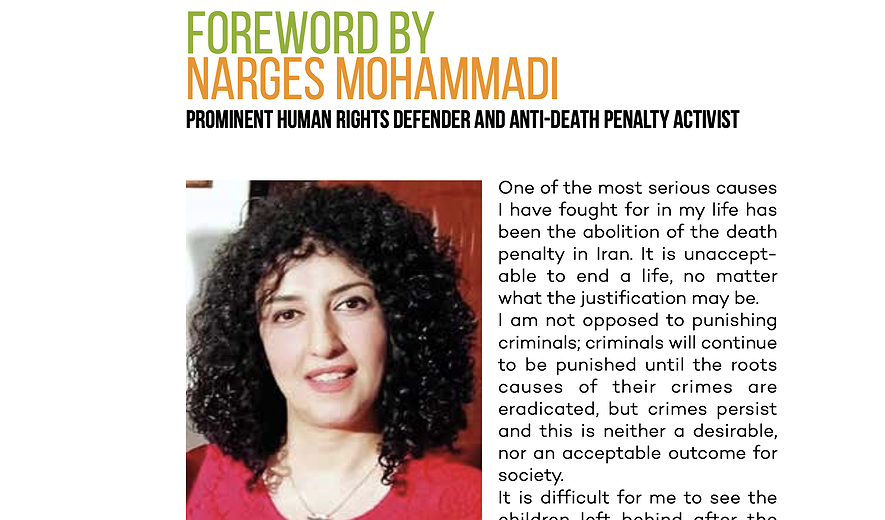 Iran Human Rights (IHR); March 31, 2021: prominent human rights defender and anti-death penalty activist, Narges Mohammadi recounts her experiences of the death penalty in the preface to the 13th Annual Report on the Death Penalty in Iran.

Narges Mohammadi’s preface is as below:

READ THE ANNUAL REPORT ON THE DEATH PENALTY IN IRAN (pdf)

One of the most serious causes I have fought for in my life has been the abolition of the death penalty in Iran. It is unacceptable to end a life, no matter what the justification may be.

I am not opposed to punishing criminals; criminals will continue to be punished until the root cause of their crimes are eradicated, but the crimes persist and this is neither a desirable, nor an acceptable outcome for society.

It is difficult for me to see the children left behind after the execution of their mothers and/or fathers. Not only do those children lose their parents, but they cannot even talk about them due to societal shame. They lose everything, and it remains to be seen what horrific fate awaits them?

The death penalty is violence. As violent as war on a smaller scale. In war, people are killed, people are also killed by the death penalty. In human battles, the violence of the death penalty is worse than the killings on the frontlines. I am sorry to say that Iran is one of the few countries where men and women are executed on multiple and sometimes false, and in my opinion unacceptable, charges. When I was imprisoned in Zanjan Prison, I was with a woman who has been waiting for her stoning sentence for eight years. But because Iran is not carrying out stoning punishments due to international pressure, they have changed her sentence to execution by hanging. A woman has to lose her life because of a relationship with a man.

Do you know what the root cause of this crime was?

While I was in Zanjan Prison, a woman I had lived with and who I could see was so full of life and desire to live, was executed by hanging. I cannot fathom how the people around her ignored the intensity of her desire to live and her pleas to not die, and why they ended her life?

Unfortunately, the laws in Iran have left the door open for the implementation of unjust executions, including political executions. Political executions began not long after the 1979 revolution and have continued throughout the years, but have unfortunately intensified during the nationwide protests of 2009, 2017, 2018 and 2019.

I also want to speak of the recent surge in the number of executions in Sistan and Baluchistan and of the Kurdish activists in Kurdistan before that.

The execution of people like Navid Afkari and Ruhollah Zam in the past year, have been the most ambiguous executions in Iran. Issuing the death penalty for Ahmadreza Djalali is one of the most erroneous sentences and the reasons for the issuance of these death sentences need to be carefully examined. These people have been sentenced to death after being held in solitary confinement and subjected to horrific psychological and mental torture, that is why I do not consider the judicial process to be fair or just; I see keeping defendants in solitary confinement, forcing them to make untrue and false confessions that are used as the key evidence in issuing these sentences. That’s why I am particularly worried about the recent arrests in Sistan and Baluchistan and Kurdistan, and I hope that anti-death penalty organisations will pay special attention to the detainees, because I fear that we will be facing another wave of executions over the coming year.