IranReport2020, Ethnic minorities
Share this
Of the 60 executions confirmed by IHR in those regions, only 13 (21%) were announced by authorities 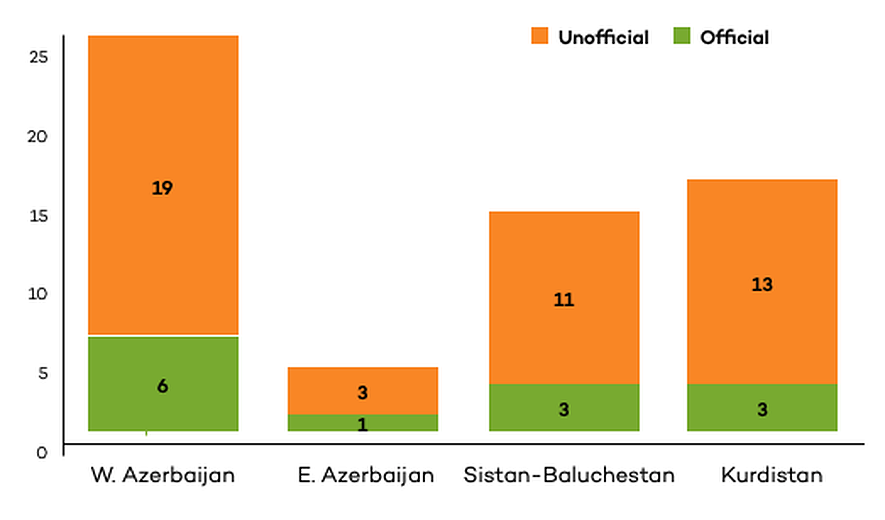 Iran Human Rights (IHR); April 30, 2021: In 2020, there was a sharp increase in the number of executions implemented in Kurdistan province compared to the previous years. Of the 267 execution in 2020, 60 people were executed in the four provinces of Sistan and Baluchistan, West Azerbaijan, East Azerbaijan and Kurdistan.

This article is an extract from Iran Human Rights’ 2020 Annual Report on the Death Penalty in Iran.

As this report and previous annual reports demonstrate, ethnic minorities in Iran are over-represented in the death penalty statistics. In addition, a strong increase in the number of executions implemented in the province of Kurdistan compared to the previous years has been observed. Moreover, with 10 executions per million inhabitants, Kurdistan had the highest number of executions per capita in 2020. According to the present report, 60 people were executed in the 4 provinces of W. Azerbaijan, E. Azerbaijan, Sistan and Baluchistan, and in Kurdistan in 2020. This represents an increase of more than 20% compared to 2019 and 2018, when 49 and 51 people were executed respectively in the 4 provinces.

However, given the fact that the execution of people who belong to different ethnic groups are not implemented exclusively in their respective regions, it is hard to say exactly how many people belonging to each ethnic minority group were executed. For instance, many Kurds have been hanged in Urmia Prison which is located in West Azerbaijan. On the other hand, information about those executed does not always include their ethnicity. The execution of Baluch prisoners is in many cases carried out in prisons outside the Baluchistan region.

Nonetheless, the considerable fact is the secrecy of executions among those 4 ethnic provinces. Of the 60 executions confirmed by IHR in those regions, only 13 (21%) were announced by authorities. Roughly 79% of executions in the ethnic regions in 2020 were carried out without even a report published in media outlets inside Iran (See Diagram).

Diagram: In 2020, more than 79% of the executions reported by IHR in East and West Azerbaijan, Kurdistan and Baluchistan were not announced by the authorities. The portion of unannounced executions in the ethnic regions for 2018 and 2019 amount to about 95%.

It is thus safe to say that an unprecedented level of secrecy in executions is taking place in the Iranian ethnic regions.

On the other hand, the absolute majority of those executed for their political affiliation belong to ethnic groups, especially Kurds. An overview of the IHR reports between 2010 and 2020 shows that among the 129 people who were executed for their affiliation to banned political and militant groups, there were 69 Kurds (53%), 34 Baluchis (26%) and 17 Arabs (13%). It is important to note that most of those executed from these ethnic groups were Sunni Muslims.

There are several reasons for the over-representation of ethnic groups among those executed. A higher opposition among people against the authorities leads them to an heavier use of violence and fear. Besides, presence of militant groups in these areas makes it easier for the authorities to issue death sentences under the pretext of fighting terrorism. The media and rights groups also have less visibility on the situation in some ethnic areas. Finally, poverty, poor socio-economic situation and the lawlessness and arbitrariness present in the Iranian judiciary are even more serious in these regions.