Kermanshah Central Prison, Qassameh Qisas
Share this
It should be noted that the people who swear in qassameh ceremonies are not required and are not usually direct witnesses to the crime. 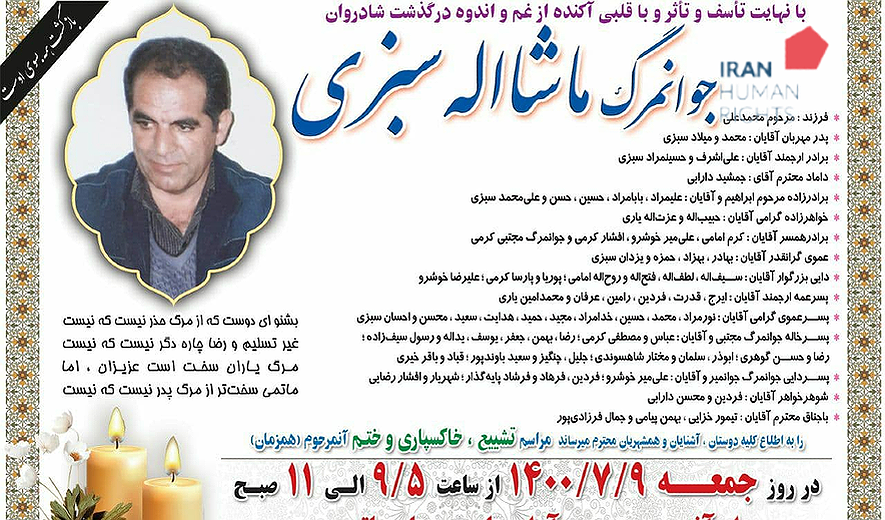 Iran Human Rights (IHR); October 4, 2021: Mashallah Sabzi who was sentenced to qisas (retribution-in-kind) for murder based on a qassameh ceremony has been executed in Kermanshah Central Prison.

According to information obtained by Iran Human Rights, a man was executed in Kermanshah Central Prison on September 30. His identity has been established as 48-year-old Mashallah Sabzi who was sentenced to qisas for murder.

“Mashallah Sabzi was sentenced to execution based on qassameh and had maintained his innocence throughout the years, he’d say, I didn’t commit the  murder and I’m completely innocent. When his family went to the prison on Tuesday, they even told them that the execution wouldn’t be carried out until their last visit had taken place. But they transferred him to solitary confinement and executed him without allowing him a last visit with his family,” informed sources have told IHR.

Qassameh is based on swearing an oath on the Quran by a certain number of the victim’s family. In murder cases, 50 male members of the victim’s family are required to make a qassameh. It should be noted that the people who swear in qassameh ceremonies are not required and are not usually direct witnesses to the crime.

At the time of writing, Mashallah Sabzi’s execution has not been announced by domestic media or officials in Iran.