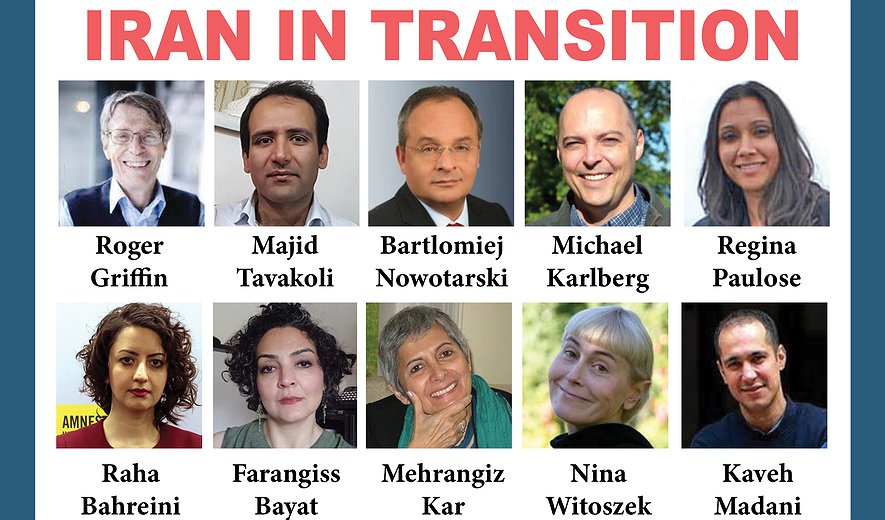 On the 43rd anniversary of the 1979 Islamic revolution, Iran Human Rights (IHRNGO) is organising a webinar with the aim of raising the debate on post-authoritarian transition.

IHRNGO’s Director, Mahmood Amiry-Moghaddam said: “The Islamic Republic is heading towards an uncertain future and a major change may not be far away. To avoid past mistakes and ensure human rights in a democratic Iran, we need a broad debate on all aspects of the transition.”

The Islamic Republic of Iran is heading towards an uncertain future. The financial crisis, increasing unemployment and poverty, and water shortages have been catalysts for several nationwide protests in the past four years. The situation has been exacerbated by the Covid-19 pandemic, with Iran being one of the hardest hit countries. The authorities have been incompetent in easing people’s problems and have instead resorted to more repression and violence. Gross human rights violations, lack of rule of law and the arbitrariness of power on the one hand, and widespread economic corruption on the other, have led to a growing anger among the population at large. The authorities’ incompetence and lack of legitimacy, combined with people’s desperation, make the future of the Islamic Republic unpredictable. It Is therefore not far-fetched to expect major political changes and a transition to a new political system in the not so distant future.

Iran Human Rights is organising a series of conferences, starting with the first round of webinars on the transition in Iran, which are taking place on January 31 and February 1.

The participants in the first round include international and Iranian scholars and activists who will address transition in Iran, lessons from transitions in other countries, transitional justice and environmental challenges in a post-authoritarian Iran.

Each speaker will give a short talk based on articles they have submitted, to be published in a book. The speakers in the first round are:

Roger Griffin, British professor of Modern History and political theorist at Oxford Brookes University, England. His principal interest is the socio-historical and ideological dynamics of fascism, as well as various forms of political or religious fanaticism and has written several books and articles on these themes.

Majid Tavakoli, is an award winning prominent Iranian political activist and researcher. He was one of the Iranian student leaders in 2009 and a political prisoner for four years.

Bartłomiej Nowotarski, constitutional lawyer and a political scientist at Wrocław University of Economics in Poland. He was a political prisoner during Communist rule in Poland (1980-81). After democratic breakthrough (1989), he took part, as an author of the draft, in writing the first Polish democratic constitution and electoral laws between 1990 and 1992. During the ‘Arab Spring’ he took part in democratic missions in Tunisia and Egypt.

Michael Karlberg, a professor of Communication Studies at Western Washington University. His scholarship examines prevailing conceptions of human nature, power, social organisation, and social change – and their implications for the pursuit of peace and justice.

Regina Paulose, an international criminal law attorney from Seattle School of Law and the University of Torino. She is Editor of the book “Green Crimes and International Criminal Law'', and has written articles on hydropower in China and India.

Nina Witoszek, is currently research professor at the Centre for Development and the Environment at Oslo University. She is also director of the Arne Naess Programme on Global Justice and the Environment at the University of Oslo. Her latest publications include Sustainable Modernity: The Nordic Model and Beyond (Routledge 2018) and The Origins of Anti-Authoritarianism (Routledge 2019).

Raha Bahreini, an Iranian-Canadian human rights lawyer with expertise in international human rights law. She works as Amnesty International’s Researcher on Iran. Before that, she assisted the work of the UN Special Rapporteur on the Situation of Human Rights in Iran.

Farangiss Bayat, PhD in Political Science from the Institute of Political Science (IEP), Lyon, France. She has worked in the fields of international relations, Iran foreign policy, social policy and women’s issues. In recent years, she has written articles on the areas of war, exile, reparative justice, and the challenges of state-building in mosaic societies.

Mehrangiz Kar, an award-winning Iranian lawyer and human rights activist. She is also author of the book “Crossing the Red Line”, and an activist of women's rights in Iran. As a guest scholar at Cape Town University, She has been studying South Africa’s peaceful transition from Apartheid rule to a democratic constitution.

Kaveh Madani, is a research professor at the CUNY Remote Sensing Earth Systems Institute, at the City College of New York and the Former Deputy Head of Iran’s Department of Environment (2017-18). He is currently Head of the Nexus Research Program at the United Nations University in Dresden, Germany, and has extensive experience in environmental research and water resources management around the world, including the Middle East and Iran. 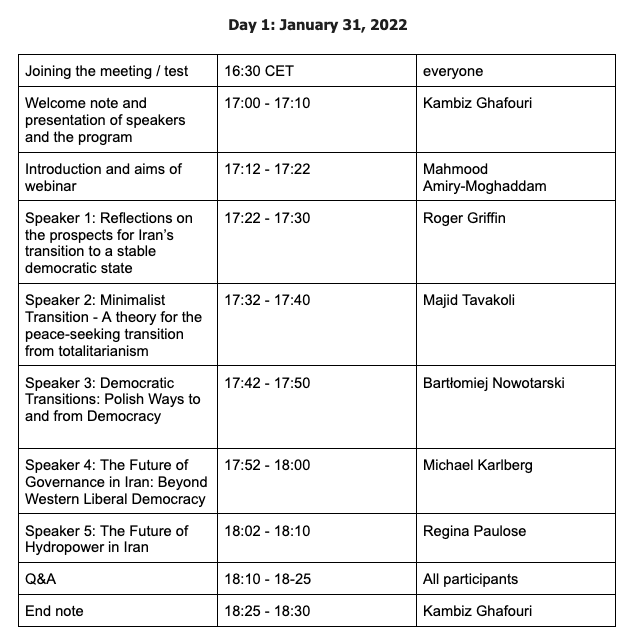 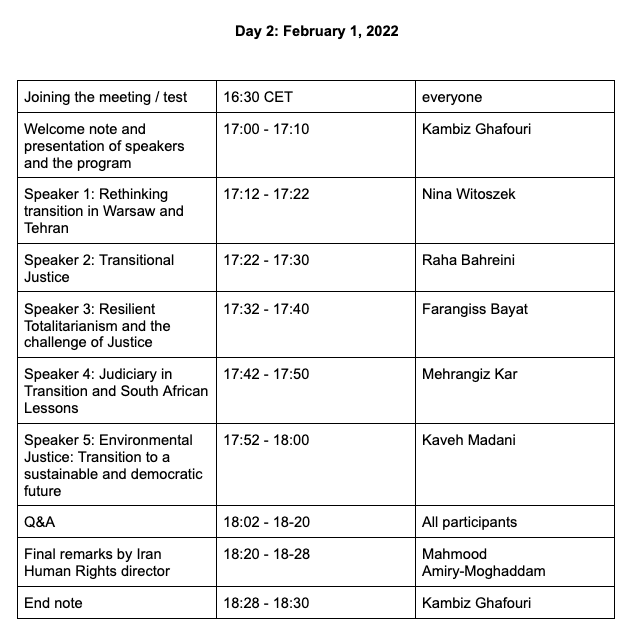