Civil Society Crackdown in the Shadow of Nuclear Talks 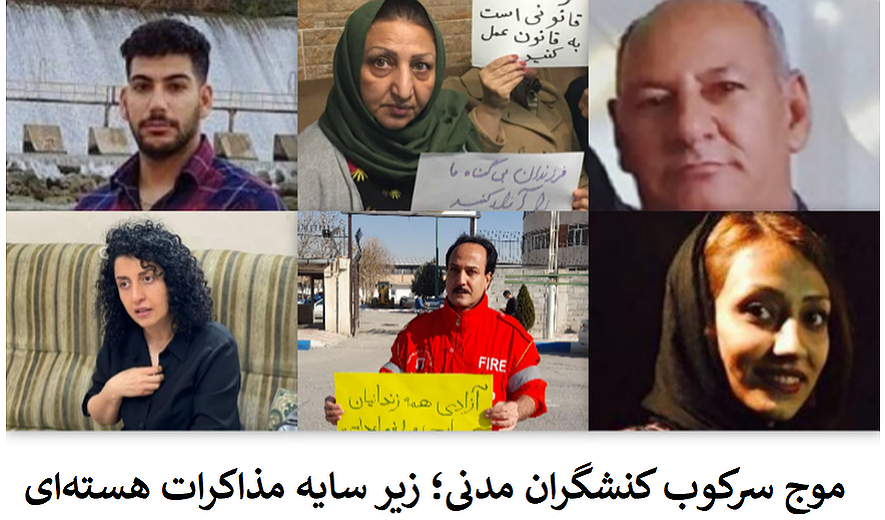 Iran Human Rights calls for the immediate dismissal of the charges and the release of all human rights defenders and urges the international community to prioritise human rights in their negotiations with the Islamic Republic. Iran Human Rights Director, Mahmood Amiry-Moghaddam said: “The nuclear deal must not overshadow the gross human rights violations committed by the Islamic Republic. Any deal that doesn’t take the fundamental rights of the Iranian people into account, will not be sustainable.”

Narges Mohammadi’s new eight-year sentence has been upheld in the recent crackdown on civil society. Zartosht Ahamadi-Ragheb was arrested at his home and the home of Shahnaz Akmali, a mother seeking justice for her son, was searched.

Narges Mohammadi was sentenced to eight years imprisonment, 74 lashes and a two-year-ban on social and civil rights by Branch 26 of the Tehran Revolutionary Court. In a separate case that was opened against her while she was still serving another sentence, she was sentenced to 30 months imprisonment, 80 lashes and a fine by Branch 1177 of the Criminal Court of Tehran’s Quds Judicial Complex last June. The charges against her include “propaganda against the system through publishing a statement (on the death penalty), staging a sit-in in prison (for the crackdown on November 2019 protests) and rebelling against prison authorities and administration (to end the sit-in protest).” Taghi Rahmani, her husband, also reported that Narges was transferred to Qarchak Prison before having to undergo urgent heart surgery and was granted medical furlough today.

Yesterday, human rights defender Zartosht Ahmadi-Ragheb, who was a signatory to the letter calling for Ali Khamenei’s resignation, was arrested at his home. Security forces searched his home and confiscated some of his personal belongings. There is no information about the reason for Zartosht’s arrest.

On February 18, Amin Ansarifar, who testified at the Aban Atrocities Tribunal about his son Farzad being killed at the November 2019 mass protests, was arrested after going to the Behbahan Public and Revolutionary Prosecutor’s Office. He had been summoned on charges of “propaganda in favour of groups or organisations opposed to the Islamic Republic.” His other son, Arman Ansarifar was also arrested a day after his father in Behbahan. His daughter, Farzaneh, was beaten and threatened with arrest when she went to the Prosecutor’s office to ask after her father and brother on February 21.

On February 21, Shahnaz Akmali’s home was also raided and searched and all electric communication devices seized. Shahnaz has been seeking justice for her son, Mostafa Karim-Beigi who was killed in the 2009 protests. Security forces warned her that Maryam, her daughter, would have to sign in at Evin court within five days. Shahnaz and Maryam have been seeking justice for Mostafa’s death for years, with Shahnaz being previously jailed. Authorities have so far failed to respond to them.