Correlation Between the Number of Executions and Political Events 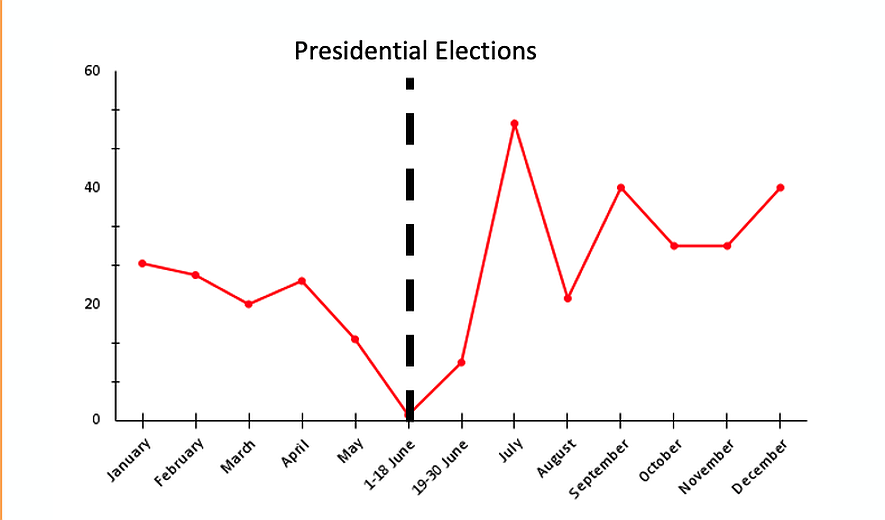 The number of executions in 2021 doubled in the 6 months after the presidential elections compared to the preceding 6 months. A similar increase was observed after the presidential elections in 2013 when Hassan Rouhani started his first presidential term, the JCPOA talks to reach an agreement between the P5+1 countries and the Islamic Republic on its nuclear program. The increase in the number of executions this year coincides with the new round of nuclear talks between the P5+1 group and the Islamic Republic.

Although most of those executed are sentenced to death for non-political (criminal) charges, there is a meaningful correlation between the timing of the executions and political events. According to IHRNGO’s execution trends recorded over the last two decades, execution rates typically go down in the weeks prior to the parliamentary and presidential elections, Nowruz holidays (21 March-3 April) and the month of Ramadan (which fell between 13 April and 12 May in 2021). However, execution rates rise immediately after the elections and when authorities anticipate protests taking place. In 2021, only one execution was recorded in the 18 days prior to the presidential elections, while at least 50 people were executed in the month after the elections.

The figures above show the reported execution numbers during Mahmoud Ahmadinejad’s two terms in office (from June 2005 to June 2013) compared with Hassan Rouhani’s two terms (July 2013 to June 2021). The figures are based on reported numbers and the actual numbers are certainly higher. There are bigger margins of error for the numbers under the first round of Ahmadinejad’s presidency (2005-2009). 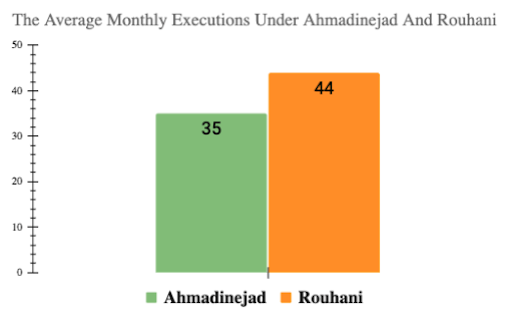 A review of Rouhani’s eight-year presidency shows that the average monthly number of executions was 44, compared to an average of 35 monthly executions during his predecessor, Ahmadinejad’s two previous terms. It should be noted that the 2017 Amendment to the Anti-Narcotics Laws also significantly reduced the monthly average execution count during Rouhani’s presidency.

Ejei, responsible for execution of more than 1500 drug offenders, takes over from Raeisi as Head of Judiciary

According to Article 156 of the Iranian Constitution: “The Judiciary shall be an independent power that protects individual and social rights.” However, Article 157 of the Constitution undermines the impartiality and independence of the judiciary and states: “The Head of the Judiciary is directly appointed and supervised by the Supreme Leader,” who under the Constitution is the Head of State and holds the state’s highest political position. 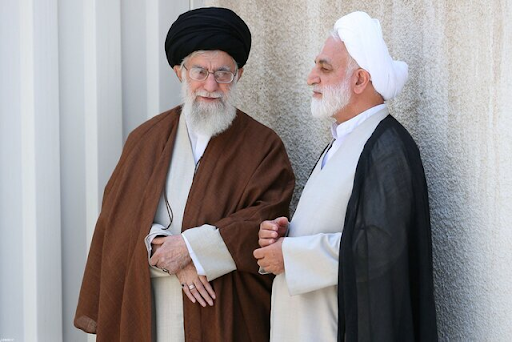 On 1 July 2021, Supreme Leader Ali Khamenei promoted Gholamhossein Mohseni-Ejei (known as Ejei) to serve as the new Head of Judiciary. Ejei has held several key positions in the Islamic Republic’s security apparatus, including Minister of Intelligence (2005-2009), Attorney General of Iran (2009-2014), and Deputy Chief of Judiciary (2014-2021). In 2014, he was granted the power to make the final decision in death penalty cases of drug offenders. The following year, in 2015, at least 642 people were executed on drug-related charges, including the Ghezelhesar Prison mass-executions on the direct orders of Ejei, setting the record for the highest annual drug executions since the early 1990s. Ejei is also one of the Islamic Republic officials who in 2010, were sanctioned for their role in the suppression of the 2009 post-election protests by both the United States and the European Union.

The Executive Order issued by the then US President, Barack Obama on Ejei, reads: “As the Minister of Intelligence at the time of the June 2009 election, Mohseni-Ejei has confirmed that he authorised confrontations with protesters and their arrests during his tenure as Minister of Intelligence. As a result, protesters were detained without formal charges brought against them and during this detention detainees were subjected to beatings, solitary confinement, and a denial of due process rights at the hands of intelligence officers under the direction of Mohseni-Ejei. In addition, political figures were coerced into making false confessions under unbearable interrogations, which included torture, abuse, blackmail, and the threatening of family members.”

Ejei replaced Ebrahim Raeisi, who was Head of Judiciary from 2019 until taking office as President in August 2021. Raeisi served on a four-person commission, known as the “death commissions,” during the 1988 prison massacre of political prisoners. Based on an order by the founder and then Supreme Leader, Ayatollah Khomeini, commissions were formed across the country and were responsible for the execution of several thousand political prisoners in the summer of 1988. The prisoners, many of whom had been tried and were serving their prison terms, went through very short interviews (often just one question) with the death commission, who ruled whether they should be executed or not. Raeisi, who is also on the US sanctions list for his role in the massacre, served on the death commission responsible for the Tehran region, where the highest number of political prisoners were held. The 1988 extrajudicial prison massacre of political prisoners is considered by many distinguished lawyers and rights organisations as crimes against humanity.

When questioned about his role in the massacre in the first news conference following his inauguration in June 2021, he responded: “Everything I’ve done in my time of holding office has been to defend human rights. If a legal expert, a judge or a prosecutor has defended the rights of people and the security of the society, he must be lauded and encouraged for preserving the security of people against assaults and threats. I am proud to have defended human rights in every position I have held so far."

In his February 2022 report to the UN Human Rights Council on the situation of human rights in the Islamic Republic of Iran, the Special Rapporteur, Javaid Rehman urged the international community to call for accountability with respect to long-standing emblematic events that have been met with persistent impunity, including the enforced disappearances and summary and arbitrary executions of 1988.