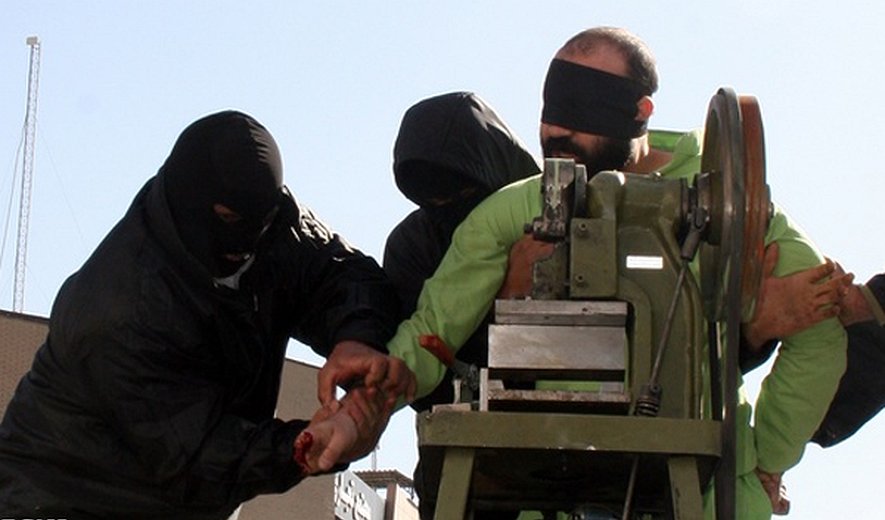 Iran Human Rights, January 24: Iranian authorities’ campaign of conducting public, medieval punishments continues. A state-run Iranian news agency reported that the amputation sentence of a prisoner was carried out in public today in the city of Shiraz (southern Iran).

According to the report, the prisoner was a 29-year-old man, identified as "A. S. H." He was sentenced to amputation of four fingers on the right hand and three years in prison and 99 lashes for engaging in an "immoral relationship".

The Chief Prosecutor of Shiraz warned that similar sentences for several other prisoners will be carried out in the near future.

Iranian authorities have increased the implementation of public sentences, like lashings, executions and amputations, in recent months.

Two young men were hanged publicly on 20 January for allegedly taking part in a mugging in Tehran.

Iran Human Rights condemns today’s barbaric public punishment and urges the international community to react. Mahmood Amiry-Moghaddam, the spokesperson of IHR said: ”It seems that the Iranian authorities’ campaign of terrorizing people through public, medieval punishments has no limits. Unless the international community displays a strong reaction, Iranians, especially children, will be forced to witness more public hangings, lashings and amputations— especially as the June 2013 Presidential election nears."

Amiry-Moghaddam continued: "We urge the UN, EU and all countries with diplomatic ties with Iran to condemn these barbaric punishments immediately. The Iranian leadership, among them The Supreme leader Ali Khamenei and the Head of Judiciary Larijani must be held accountable for these crimes."