execution, Reports, correlation
Share this
In general, execution numbers are high when authorities fear protests and the numbers are low when the world’s focus is on Iran 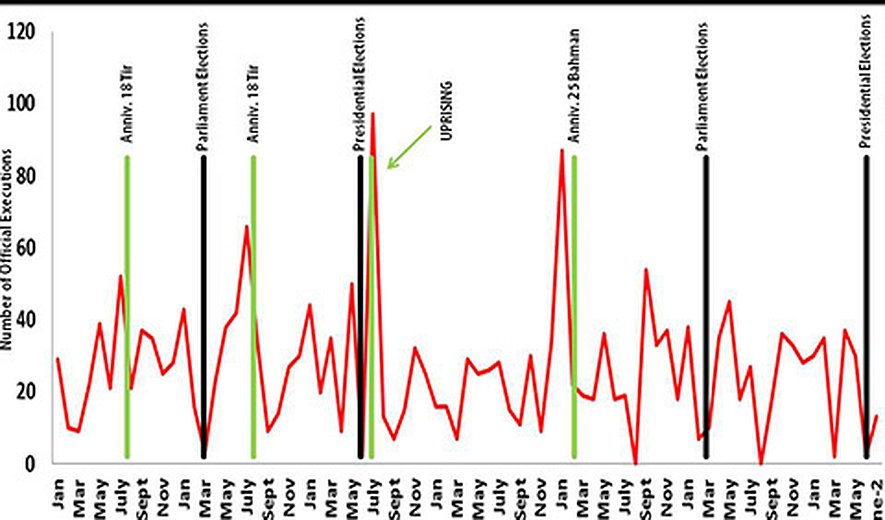 Iran Human Rights, July 11: After a short break while leading up to the June 14 presidential election, a new wave of executions began on June 20 in Iran. According to official media sources, 38 people have been executed in the last three weeks. Additionally, at least 44 executions have been reported by human rights groups in the same period, however these executions were not announced by Iranian authorities or the media. According to the official and unofficial reports, at least 82 prisoners have been executed in different Iranian cities during the three weeks that followed the June 14 election.

The annual death penalty report published by Iran Human Rights for 2012 shows that between 70 to 80% of those executed in Iran are convicted of drug related charges. Iranian authorities have repeatedly claimed that the high number of executions in Iran is due to Iran’s struggle against international drug trafficking, since Iran is on the transit line between Afghanistan and Europe. Iran Human Rights (IHR) and other human rights groups have previously claimed that Iranian authorities use the death penalty as an instrument to spread fear among society, in order to prevent protests and to remain in power. Below IHR has analysed the relation between the number of executions and political events in Iran from 2007 to 2013. Only executions that have been announced by authorities are included in this analysis. The summary of the analysis is shown in the diagram above.

IHR is currently conducting a more detailed analysis of the execution trends in the last decade in Iran. The results will be presented in the near future. Commenting on the present analysis Mahmood Amiry-Moghaddam, the international spokesperson of IHR says: The present analysis indicates that there is a meaningful correlation between execution trends and political events in Iran. It seems that Iranian authorities occasionally choose the timing of executions in a coordinated and non-arbitrary manner. In general, execution numbers are high when authorities fear protests and the numbers are low when the world’s focus is on Iran. Regarding the low number of executions during the elections Amiry-Moghaddam says: One possibility might be that during elections the authorities have to give more space to the public in order to encourage people’s participation in the elections. Additionally, during elections international journalists visit Iran one week before and after elections. However, in the weeks prior to and after the elections the number of executions reaches a peak.