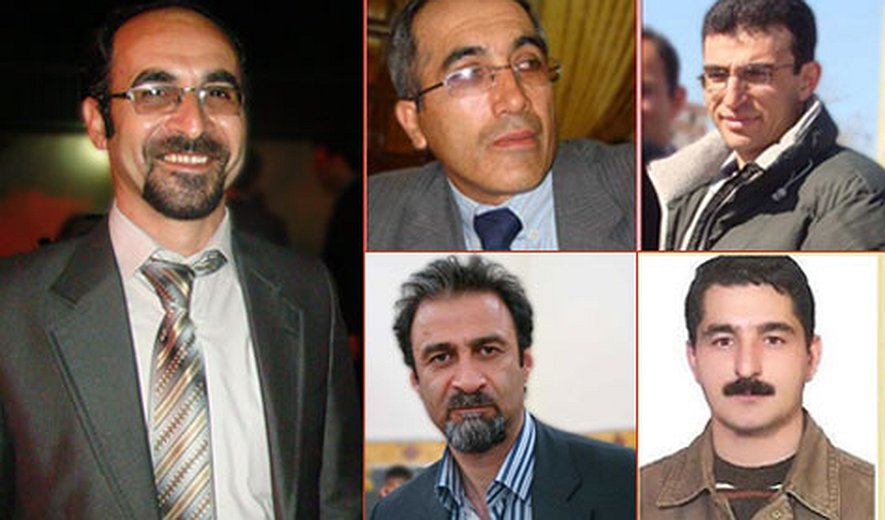 Iran Human Rights, July 26: Iran Human Rights is strongly concerned about the health of five Azerbaijani prisoners of conscience who have entered the third week of their hunger strike.

Five Azerbaijani civil rights activists Latif Hassani (43), Mahmoud Fazli (45), Shahram Radmehr (38), Ayat Mehralibeiglu (Yürüş) (35) and Behboud Gholizadeh (48) began their hunger strike on July 13, 2013 in protest to the nine-year sentences each of them were issued in May 2013.

The prisoners, who belong to a group known as the New Southern Azerbaijan National Awakening Movement Party (Yeni Gamoh), were charged with "Formation of an illegal group" and "Propaganda against the regime".

The prisoners were transferred to Tehran after they launched their hunger strikes in Tabriz Prison earlier last week (most likely on Tuesday, July 23).

According to the website of the group Yeni Gamoh, after one day of being kept in the quarantine section of Evin prison, the five civil rights activists were transferred to Rajai Shahr Prison in Karaj where they are currently held.

Based on information obtained from their families, the Yeni Gamoh website reported that the prisoners were subjected to physical torture during their detention and transfer to Tehran.

Iran Human Rights (IHR) strongly condemns the inhumane treatment of the Azerbaijani prisoners of conscience and asks for their immediate release. Mahmood Amiry-Moghaddam, the international spokesperson of IHR, said: "These prisoners are sentenced to heavy prison terms solely for starting an NGO and for their civil activities. They have been subjected to an unfair judicial process and their sentence is a violation of the UN Vonvention of Civil and Political Rights, which Iran has ratified. We ask for their immediate release." Amiry-Moghaddam added: "We are strongly concerned about the health of these prisoners after more than two weeks of hunger strike and urge the UN to send a team to visit the prisoners and investigate reports of physical torture."