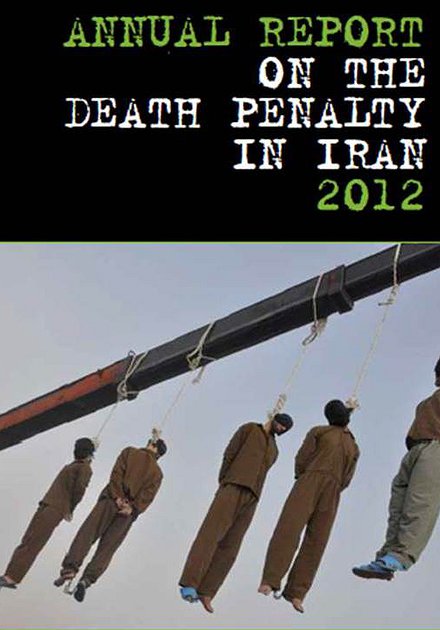 The fifth annual report of Iran Human Rights (IHR) on the death penalty in Iran is an assessment of how the death penalty was used in 2012. Due to harsh crackdowns on civil society, non-existing freedom of press and lack of transparency of the Iranian judicial system, the present report by no means covers all death penalty cases in Iran. The report is the result of efforts by human rights defenders, members and affiliates of IHR in Iran who, on some occasions, took serious risks to help provide a more accurate picture of the death penalty than the official channels do. The number of executions in 2012 in Iran is among the highest in more than 15 years. Besides the confirmed numbers, it is believed there is a large number of unannounced executions.

The Annual Report on the Death Penalty in Iran – 2012 is being published at a time when Iranian society heads toward an uncertain future. Socio-economic conditions worsen each day, and in June 2013 another round of Presidential elections will commence in Iran.

Keeping in mind the 2009 post-election protests in Iran and the Arab Spring in 2010 and 2011, Iranian authorities are well aware that the outcome of new protests in June 2013 may be even worse than the protests in 2009. They are therefore doing the maximum to prevent new protests.

Spreading fear through society is the Iranian authorities’ main oppressive strategy, and the death penalty is their most important instrument to do so. Since the protests in 2009, the number of executions, particularly public executions, has risen dramatically.

Public executions in 2012 were more than six times higher than numbers from 2009.

The trend continues in 2013. Just in January and February 2013 alone, 20 people were hanged in public. Other demonstrations of horror were carried out in 2013, including the Taliban-style public hanging of a young man in a football (soccer) stadium in Sabzevar , the public executions of two young men, who were convicted of mugging charges , and the public amputation of a man’s fingers in Shiraz .

Since October 2012, IHR has received reports of weekly executions in Vakilabad Prison, where probably several hundred prisoners have been executed so far. IHR has included only a small portion of those executions in this report; only those that have been confirmed by at least two independent sources.

IHR and ECPM characterize mass executions in Vakilabad Prisonas a massacre and have urged the United Nations to send a fact-finding mission to Iran to investigate these executions . There are also reports of unannounced executions in several other Iranian prisons, such as Rajai Shahr Prison in Karaj. Death row prisoners in this prison live under the constant fear of execution.

However, in 2012, victims of the Iranian regime’s ‘war on drugs’— which is supported by UNODC—were finally given a face. Saeed Sedighi, a young man tortured to confess to drug trafficking, was sentenced to death after an unfair trial and executed in October 2012. His execution was postponed for one week due to an international campaign initiated by several human rights organizations as IHR and ECPM, statements issued by UN Special Rapporteurs, and reactions from the international community.

Many death row prisoners in Iran are treated in a similar manner. They are subjected to torture, coerced confessions, unfair trials, and their cases do not receive appropriate attention. IHR and ECPM along with other human rights groups have urged the UNODC to halt all fundings to Iran as long as prisoners, convicted of drug-related charges, are facing the death penalty.

Six Salafist Kurdish prisoners were executed in December 2012 in Tehran and more are awaiting on death row. Zanyar and Loghman Moradi, two Kurdish death row prisoners continue to be at imminent danger of execution. Less information is available regarding Baluchi death row prisoners, but according to IHR reports, many Baluchi prisoners have been executed in other Iranian prisons outside Baluchistan.

As the June Presidential election nears, we fear an increase in the number of executions, particularly in the ethnic regions of Iran. Mahmood Amiry-Moghaddam, the international spokesperson for IHR, says: “We urge the international community to pay more attention to Iran in the coming months as we expect an increase in the number of executions. There are also several prisoners of conscience who are at imminent danger of execution.” He continues: “We urge the United Nations to impose a ban on public executions, which besides being a dehumanizing punishment, also brutalizes the general public; particularly children.”