Annual Report on the Death Penalty in Iran- 2017 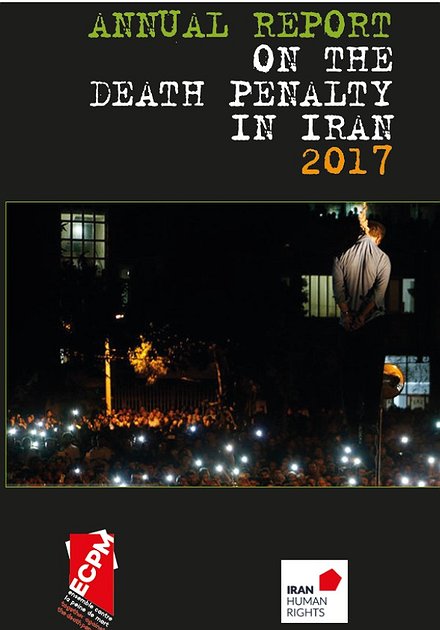 IRAN HUMAN RIGHT (MARCH 13, 2018): The 10th annual report on the death penalty by Iran Human Rights (IHR) provides an assessment and analysis of the death penalty trends in 2017 in the Islamic Republic of Iran.

The report sets out the number of executions in 2017, the trend compared to previous years, charges, geographic distribution and a monthly breakdown of executions. Lists of the female and juvenile offenders executed in 2017 are also included in the tables at the end of the report. Drug-related executions before and after the new amendments were passed in Parliament, approval by the Guardian Council and its enforcement are reviewed. The old Anti-narcotics law and new amendment, along with its strengths and weaknesses, are discussed.

As in previous reports, data showing the role of the Revolutionary Courts on Iran’s use of the death penalty and the death penalty trends under President Rouhani are provided. Death penalty for murder, which is punished by qisas (retribution in kind), receives special attention.

Maps showing geographic distribution of drug-related executions, all executions and executions per capita in different Iranian provinces are provided.

The report also looks into the abolitionist movement within Iran and some information about the crackdown on human rights defenders.

The number of “forgiveness” cases, where the family of murder victims chose forgiveness instead of retribution, is provided and compared to those of death sentences in murder cases.

The 2017 report is the result of hard work from IHR members and supporters who took part in reporting, documenting, collecting, analyzing and writing its content. We are especially grateful to IHR sources inside Iran who, by reporting on unannounced and secret executions, incur a significant risk. Due to the very difficult context, the lack of transparency and the obvious risks and limitations that human rights defenders face in the Islamic Republic of Iran, this report does not give a complete picture of the use of the death penalty in Iran by any means. There are reported execution cases which are not included in this report due to a lack of sufficient details or an inability to confirm cases through two different sources. However, this report tries to give the most complete and realistic figures possible in the present circumstances.