In 2014 there have been high level meetings between the Iranian authorities and governments of many Western countries. In addition to visits by hundreds of lawmakers and politicians from the Western countries, top EU officials and foreign ministers of several countries including Norway, Sweden, Italy, Spain and Austria have visited Tehran. Dozens of high level meetings involving Iranian leaders have taken place on the international stage.[1] 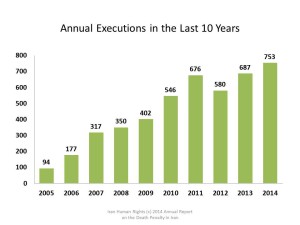 In spite of this level of engagement, the data collected by Iran Human Rights (IHR) and published in this report show that the number of executions conducted in 2014 is the highest in more than 15 years.  Moreover, a comparison of the execution rates in the 18 months before and after the election of Mr. Rouhani shows a significant increase in the use of the death penalty after Rouhani’s election. There has also been the highest number of reported juvenile executions since 1990. In addition, Iranian authorities continue execution for non-violent civil and political activists.

Executions of Arab teachers, Hadi Rashedi and  Hashem Shabani, who belonged to an Arabic cultural group called “Al-Hiwar” (dialogue)[2], Gholamreza Khosravi, charged with giving economic support to a banned opposition group[3] and Mohsen Amir Aslani charged with insulting the Prophet Jonah and heresy[4], are just few examples of this practice. The Iranian Supreme Court upheld the death sentence for Soheil Arabi, for insulting the Prophet on Facebook and he remains in danger of execution[5].

This report raises the question whether the use of death penalty has been an issue in the bilateral dialogue between Iran and the countries which are the main promoters of abolition of the death penalty on the international scene.  If the death penalty is an important issue in these talks, why are the execution numbers rising at the same time as the diplomatic relations are increasingly flourishing? And more importantly, what specific measures are the international community going to take in order to counteract this trend?

Commenting the report Mahmood Amiry-Moghaddam, the director and spokesperson of IHR said:

“Despite the improving relations between the international community and Iran, the situation of the death penalty has deteriorated significantly during the presidency of Hassan Rouhani.  This trend cannot continue. Restriction of the use of the death penalty must be one of the top demands in any dialogue between the international community and Iran.  It is time to show that human rights also benefit from these dialogues.”

The present report is being published just days before adotion of Iran’s UPR at the Human Rights Council (HRC) where Iran will be responding to more than 290 recommendations, among them 39 specific recommendations on the death penalty.  At the same time, public opposition to the death penalty is increasing inside Iran.  There is an ongoing open debate on the issue of public executions.

Further, some Iranian officials have indicated a need for change in the Anti-narcotic Law in order to decrease the execution numbers for drug related offences. Further change in the legislation regarding the death penalty for juvenile offenders has also been mentioned. At the same time, a forgiveness movement is forming in Iran, where the families of the murder victims increasingly denounce the use of the death penalty as punishment.

Raphaël Chenuil-Hazan, the executive director of ECPM[6] said, “Diplomatic relations and the UPR are good opportunities to improve the situation of the death penalty in Iran. But it demands a stronger will from the international community and Iran’s dialogue partners, particularly the European Union and its members.”

IHR and ECPM believe that extending the mission of the UN Special Rapporteur on human rights in Iran, close monitoring of the UPR recommendations accepted by Iran, conditioning further improvement of the relations with Iran on a reduction in the use of the death penalty and strengthening the Iranian civil society struggling against the death penalty, are the means by which the international community can contribute to restriction of the death penalty in Iran.

IHR and ECPM further believe that abolition of the death penalty for juvenile offenders, public executions and death penalty for drug-related offences are the areas where significant progress can be made in 2015.