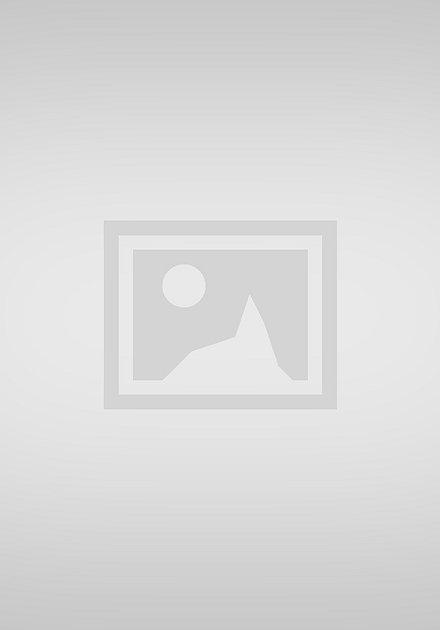 Mahmood Amiry-Moghaddam asked the world community and the international civil society to condemn the violations of the human rights in Iran and show their support to the Iranian people’s movement for democracy and the human rights:

"Many of those who have demanded their legitimate human rights in the past months in Iran are at risk of death penalty in the Iranian prisons. The international community should not get used to the repression and death penalty in Iran even though it happens everyday. Iranians are living under one of the world’s most repressive regimes. Iranian people need the world’s support today, and we should keep in mind that the world needs a democratic Iran."

The present report is primarily based on the information published by the official Iranian media and gathered by members of the organization “Iran Human Rights” in the period of January 1. to December 31. 2009. Iran Human Rights has also used its own sources or reliable sources belonging to other human rights networks.

Since the protests after the presidential elections in June 2009, transfer of information has been increasingly difficult. Besides, the Iranian authorities have imposed a more strict control on what information they choose to hand out to the media, compared to the previous years. There are several lines of evidence suggesting that the actual number is significantly higher.

The vice prosecutor general of Ahwaz (capital of the southwestern province of Khuzestan) the number of executions in the past 11 months were 38. This is about than 3 times higher than the executions announced by the official media and our own sources. The situation could be similar in several other Iranian cities.

We have reason to believe that the numbers of the executions in the Kurdish regions of Iran are significantly higher than those presented in the present report.

This indicates that the present report is a strong underestimation of the real numbers of the death penalty carried out in Iran in 2009. But still Iran stays at the top of the world, along with China, as the country with highest number of executions.

These executions do not include those who were killed under the post-election protests. The total number of those who have been killed in connection to the protests is not known but according to different sources it could be between 70-150 people

Below follows a short preliminary report on the death penalty in 2009 in Iran. A more complete report will follow later:

According to our preliminary analysis at least 402 people were executed in 2009. 339 of the 402 were reported by the official Iranian media. This number is the highest since 2000. The following are numbers of the execution in Iran since year 2000, reported by Amnesty International: 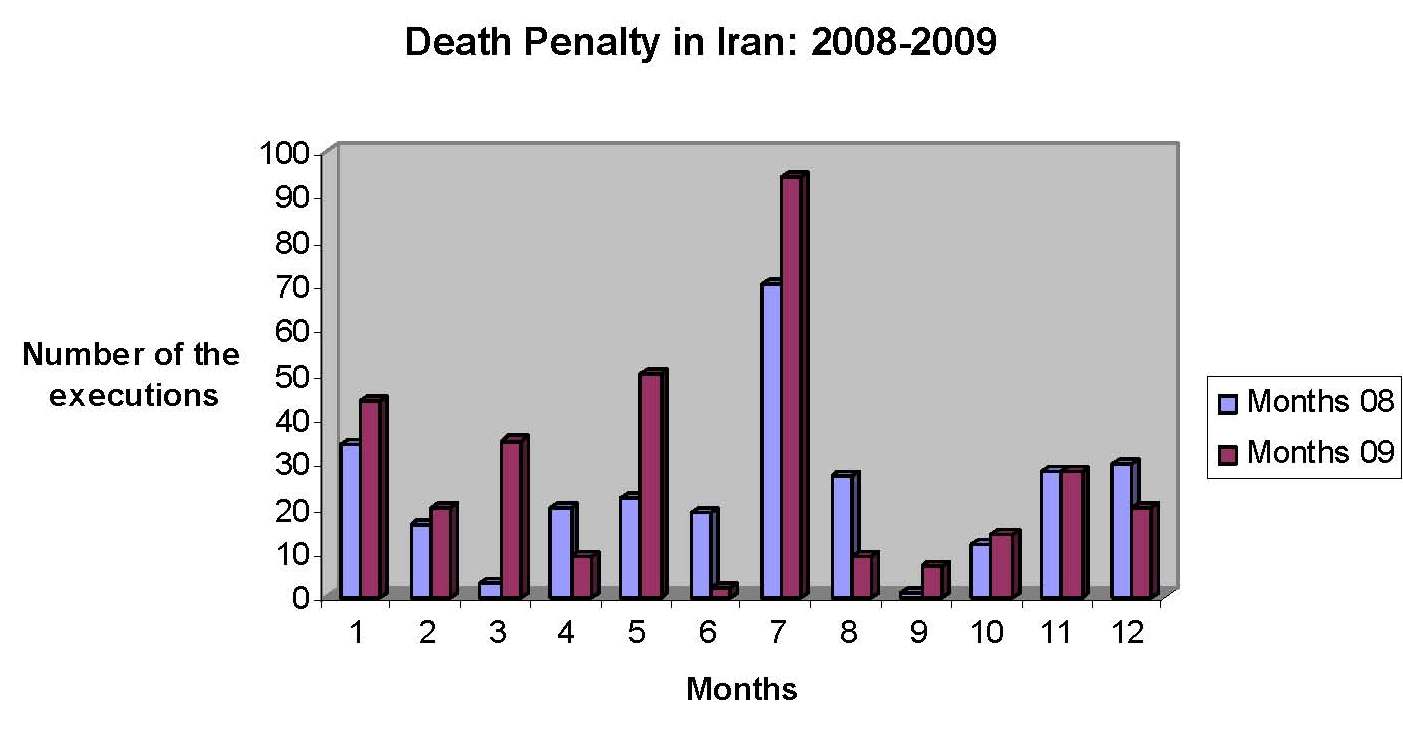 Information Provided by the Authorities

Moharebeh (meaning at war with God) is a term commonly used by the Iranian authorities for those to are involved in armed struggle against the authorities. 27 of the 31 individuals executed for moharebeh, were convicted of being members of the Baluchi group “Jondollah”. However, according to our reports many of these individuals either didn’t have any connection what so ever with Jondollah, or they just had web-based activities. The Kurdish political prisoner Ehsan Fattahian was executed in November 2009 convicted of moharebeh and membership in a Kurdish political party. He was originally sentenced to 10 years of prison for his membership in an illegal Kurdish political party. There were no evidence of his participation in any armed action.

Among the charges used for the death sentences we also find adultery (2), acts against chastity (1) and unspecific charges such as “disruption of order”.

One man who was convicted of adultery sentenced to death by stoning, was hanged in the prison of Sari.

Many of those executed were tried in closed “Revolutionary Courts”.

On May 30th three men were hanged charged for involvement in a bombing three days earlier. The whole trial process took about 30 hours.

After the summer’s elections we have observed an increase in number of the arbitrary executions.

Among those executed convicted of Moharebeh on July 14. in Zahedan, there were individuals who are believed to be hanged as a result of pure demonstration of power by the Iranian authorities. One of these individuals was “Manochehr Shahbakhsh” (26) who was arrested by the Pakistani authorities and handed over to Iran few weeks prior to the execution. Manochehr was working with a Sunni Muslim religious group with no connection to Jondollah or any other political group. One day prior to his execution, he wasn’t aware of the fact that he was going to be hanged.

On July 30. at leats 24 people were executed in the Rajaee shahr prison of Karaj (west of Tehran). Five days later the Iranian state media reported execution of 24 well-known international drug dealers. One of those executed on July 30. was according to the Afghan newspaper “Herat”, arrested one month prior to the execution at a location close to Tehran’s Azadi square (site of the major protest demonstrations). His family was not aware of his execution and claim that he didn’t have any connection with a narcotic league.

Families of many of those executed after the elections have been threatened by the Iranian authorities, and the bodies of the executed have been given to their families under the condition of “keeping silent”.

Most of the executions have taken place by hanging inside the prison.

9 people were hanged in public places.

One person was stoned to death according to the official reports.

Public hanging of 2 men in Sirjan was stopped due to public protests. At least 7 people were shot to dead under these protests. The men were finally hanged inside the prison of Kerman.

Activities against the death penalty

Following the summer’s elections increasing number of activists and general public have been involved in activities against the death penalty. Several hundred people had been gathering outside the Evin prison since early hours of the dawn of execution of Behnoud Shojaee. In December 2010, crowd of angry people rescued two young men from the gallows in Sirjan. People didn’t let the authorities to carry out the public hanging later that evening. At least 7 people were shot to death in the protest. The men were later hanged inside the prison of Kerman.

“Friday morning, May 1st the phone ranged. Delara’s mother answered the phone and heard Delara’s voice on the other side of the phone saying: “Mom, they are going to hang me". The Iranian authorities hanged Delara without having informed her family or lawyer! The hanging was by some people interpreted as a warning by the Iranian regime to the civil society.

Behnoud Shojaee was another well-known minor offender who was hanged in 2009. His execution had been postponed 5 times previously. 3 times he had been to the execution yard at the Evin prison and seen other people be hanged. Several hundred people were gathered all the night outside the Evin prison. But it didn’t help. He was hanged by the father and the mother of Ehsan.

Iranian authorities claimed that “qesas is the right of the family” Iran Human Rights spokesman said in a public statement: Qesas is probably the only “right” of the Iranian people that the regime insists to practice. We have several examples where the Iranian authorities do not respect the offended family’s right to forgive”

Execution victims are amongst the weakest in the society:

• Soheila Ghadiri (30) was convicted of murdering her 5 days old baby. According to the forensic medicine she was suffering psychosis at the time of the offence. The baby’s father, who according to the law was the only one who could decide whether to execute Soheila or not, wrote in a letter that he was willing to pardon her. However, neither the expert letter from the forensic medicine, nor the pardon of the baby’s father could save Soheila from execution.