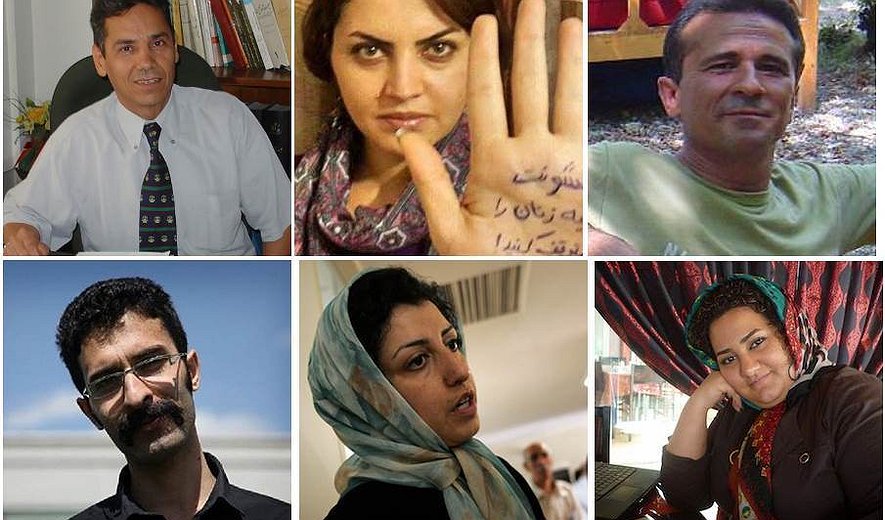 IRAN HUMAN RIGHTS (18 MAY 2017): In advance of the Iranian Presidential elections on 19 May, which will take place in a largely restrictive environment, we, the undersigned organisations, urge that the Iranian government fulfill its international human rights obligations and cease the systematic targeting of human rights defenders (HRDs).

Scores of HRDs have been arrested and remain in prison on arbitrary charges, simply for carrying out their work in defence of human rights. These include lawyer Abdolfattah Soltani, student activist Zia Nabavi and human rights defender Golrokh Ebrahimi Iraee. In both 2016 and 2017, the UN Special Rapporteur on the situation of human rights in Iran reported that HRDs continued to be subjected to a wide range of violations of their rights of freedom of movement, expression, association and assembly and are often exposed to death threats, harassment, arbitrary arrest and detention and unfair trials.

Charges on grounds of national security, espionage, propaganda against the regime and insulting the Supreme Leader are among the most commonly invoked against human rights defenders and political critics. The judiciary targets independent trade unions, women’s rights groups and human rights NGOs while security and intelligence forces continue to round up HRDs.

In 2016, several labour rights defenders faced criminal prosecution. This included Najbeh Salehzadeh, who was charged in June with sacrilege and insulting the Supreme Leader. On 16 September 2015, another labour rights defender, Mahmood Salehi was notified that he had been sentenced to nine years’ imprisonment for “acting against national security” and “establishing an illegal workers’ syndicate”. On 22 February 2016, a Revolutionary Court sentenced Ismail Abdi, secretary general of the Teachers’ Association, to six years in prison for organising a teachers’ demonstration in front of the Parliament on 15 May 2015. Labour rights defenders and trade unionists Jafar Azimzadeh and Shapour Ehsanirad were sentenced to 11 years in prison in 2016.

Since January 2016, more than a dozen women’s rights defenders in different Iranian cities have been summoned for long, intensive interrogations by the Revolutionary Guard and threatened with imprisonment on national security-related charges.

Some had been involved in a campaign that was launched in October 2015 advocating for increased representation of women in Iran’s February 2016 parliamentary elections. Alieh Matlabzadeh, a photographer for the Zanan (Women) magazine, and Farzaneh Jalali, a Kurdish women's rights defender, were among those detained in 2016. The reason for their detention was their attendance at a civil society workshop in Georgia on the topic of empowering women. Other women’s rights defenders who participated in the same workshop were questioned by the Ministry of Intelligence. HRDs who still manage to find ways to travel abroad for trainings are in the minority; most are stopped at the border or have had their passports confiscated.

In May 2016, a Revolutionary Court sentenced HRD Narges Mohammadi to a total of 16 years in prison for charges including “membership of the banned campaign Step by Step to Stop the Death Penalty”. In November 2016, Ahmad Montazaeri, an Islamic cleric, was sentenced to six years in prison for publishing an audio tape that purportedly incriminates Iranian authorities in the illegal execution of thousands of political prisoners during the summer of 1988. Human rights defender Arash Sadeghi is also currently in prison serving an 11 year prison sentence on charges of ‘insulting the founder of the Islamic Republic’. In September 2015, children’s rights defenders Saeed Shirzad, Amir Amirgholi and Atena Daemi were also sentenced to prison.

Families of human rights defenders and relatives of those who have been subjected to human rights abuses also face pressure.

Daughter of renowned lawyer Nasrin Sotoudeh has been prevented from traveling abroad since July 2016. Shahnaz Akmal, mother of one of the peaceful street protesters killed by the authorities in 2009, was detained in January 2017 for seeking justice for her son and for advocating for the rights of political prisoners.

In response to their detention, poor prison conditions, ill-treatment and harassment of their family members, detained HRDs and political prisoners have repeatedly gone on life-threatening hunger strikes over the past number of months.

This has seriously affected their health. On 9 April 2017, Atena Daemi, who is currently serving a seven-year prison sentence at Evin prison in Tehran, began a hunger strike in protest at the judicial harassment of her and her family. Esmail Abdi, Secretary General of Iran’s Teachers’ Trade Association, is also on hunger strike. There are serious concerns for their health and the authorities have ignored their demands.

We call on Iranian authorities to:

1) Quash the convictions of and release all human rights defenders who have been sentenced to imprisonment solely on the grounds of their human rights work;

2) Drop all charges against human rights defenders who have been charged for their legitimate work in defence of human rights and immediately secure their release from pre-trial detention;

3) Cease the use of national security charges against human rights defenders;

4) Take measures to ensure that the security and intelligence forces refrain from targeting the families of human rights defenders in acts of reprisals for their work or for their expression of views contrary to government policy;

5) Guarantee in all circumstances that all human rights defenders are able to carry out their legitimate human rights activities without fear of reprisals and free of all restrictions including judicial harassment, and ensure full respect for the UN Declaration on Human Rights Defenders;

7) Amend the Iranian Constitution to safeguard freedom of expression and association and repeal the provisions of the 1986 Press Law and the Computer Crimes Law that restrict the legitimate exercise of these rights. Amend broadly defined criminal offences contained in the penal code, such as crimes against national security, which are the main source of lengthy sentences handed down to human rights defenders.