Death Row, Protesters, Deaths in Custody, Mehdi Salehi
Share this
His family were told that every family member would be imprisoned like Mehdi if they talked to the media. 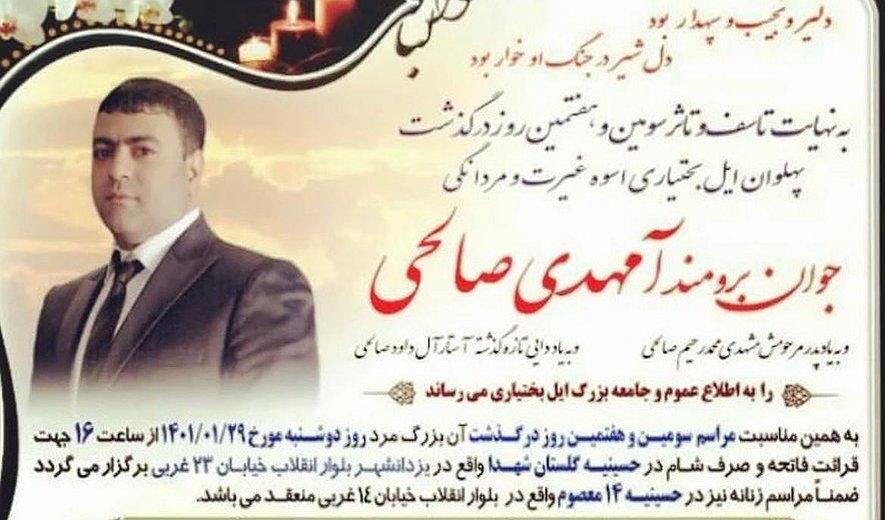 Iran Human Rights (IHRNGO); April 15, 2022: Mehdi Salehi, a protester who died under suspicious circumstances in custody, was buried under strict security measures in the early hours of this morning. Officials refused to return his body to his family who have been threatened that “every single family member would be imprisoned like Mehdi” if they speak to the media. News of his death broke yesterday.

The authorities’ refusal to return his body strengthens the possibility of an extrajudicial killing and Iran Human Rights once again reiterates its call for the formation of an international fact-finding mission.

Stressing that extrajudicial killings have become a common and low-cost way for the Islamic Republic to physically eliminate its dissidents in recent years, Iran Human Rights calls for an international fact-finding mission to hold the perpetrators accountable.

Director, Mahmood Amiry-Moghaddam said: “Mehdi Salehi was in prison after being sentenced to death in an unfair trial. Regardless of what cause of death is announced by authorities, his case must be investigated as an extrajudicial killing by an international fact-finding mission.” He added: “All those responsible in the chain of command, including prison officials, the Head of Judiciary and Supreme Leader of the Islamic Republic of Iran, must be held accountable.”

According to information obtained by Iran Human Rights, security forces contacted Mehdi Salehi’s family at 1:30 am on April 15 to inform them that Mehdi would be buried in the morning. But they called back 15 minutes later and told them to “wait until we call you again.” They called again at 4:45 am and said that only the immediate family, without any relatives, would be permitted to attend the funeral at Yazdanshahr Cemetery.

“Mehdi’s body was buried at 6 am in the presence of plainclothes agents and several armed soldiers. The agents were even filming the funeral from all four angles so they could later identify anyone that wasn’t an immediate family member,” the informed sources said.

A source close to the family said: “They were told that every family member would be imprisoned like Mehdi if they talked to the media. They said they weren’t permitted to set a stone for 40 days and even then they’d have to coordinate it with security officials.”

A source close to Mehdi’s family attributes his health problems to the torture he was subjected to during interrogations: “Mehdi was tortured so badly after being arrested that he had blood in his urine for ages and they’d electrically shocked his head so much that he had suffered two strokes and had constant headaches. They obtained false forced confessions under such torture. He experienced death for days during his interrogations.”

According to IHRNGO sources, he and his four co-defendants had told the court that they had been tortured to make false confessions and did not have access to lawyers of their choice throughout the legal proceedings. Mehdi later told his family that the judge insulted him and spat at him.

Mehdi’s family who intended to file a complaint about his death were told by security officials that “which institution do you want to complain about? For what crime?” and added that “we’ll investigate it ourselves and announce his cause of death.”

“The family has been threatened so much that they are not willing to talk to the media,” the source added.