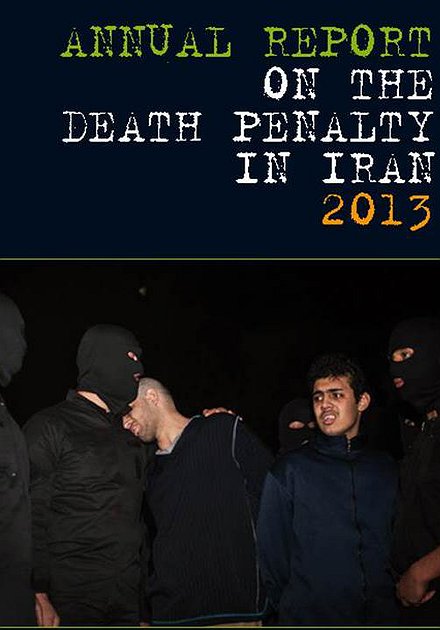 Iran Human Rights (IHR) launched its sixth annual report on the death penalty in Iran at the British Parliament (House of Lords) on Tuesday March 11th. The report was launched with the support of the  All–Party Parliamentary Groups on the Abolition of the Death Penalty and Human Rights,  and Together against the death penalty (Ensemble contre la peine de mort – ECPM).

The sixth annual report on the death penalty in Iran gives an assessment of how the death penalty was implemented in 2013 in the Islamic Republic of Iran. The number of executions in 2013 is the highest reported in more than 15 years, and the trend continues in 2014.

Public executions remain high and possession and trafficking of narcotic drugs remain the charges the most commonly used against those executed in Iran in 2013. Moreover, there are several juvenile offenders among those executed, and more than 40% of the executions either were not announced by the authorities or they were conducted secretly.

Ethnic minorities were over-represented in the latter group. Many of those who were executed were subjected to unfair trials, torture and forced confessions.

The sixth annual report on the death penalty in Iran is being published at a time when the international community is improving its relation with the Iranian authorities. After the election of M. Hassan Rouhani, and the following provisional agreement about Iran’s nuclear program, several high-ranking political delegates from several EU countries expressed their optimism or visited Iran.

Mahmood Amiry-Moghaddam, the spokesperson of IHR  states: “it is a paradox that the relations between Iran and the international community are improving while the number of the executions in Iran increases. The election of Mr. Hassan Rouhani has not improved the situation.

Improvement of diplomatic relations should be conditioned into concrete steps from the Iranian authorities to comply with the international obligations regarding the use of the death penalty.”-- "Situation of the human rights in general, and the death penalty in particular, must be at the top of the agenda in the dialogue between the international community and the Iranian authorities".

Due to lack of details, more than an additional 130 reported executions have not been included in this report.

Annual executions over the past 9 years The diagram above shows the number of annual executions based on the reports published by Amnesty International (AI) and IHR since 2005. The numbers in the green columns show confirmed executions (both official and unofficial). The red columns indicate the number of reported cases that have not been confirmed due to lack of details and are therefore not included in the annual report. The number of executions in 2013 is higher than in previous years and is probably among the highest since the early 1990s.

Monthly overview of executions in 2013 The diagram above shows the monthly variations in the number of executions in 2013. The number of both official (green) and unofficial (yellow) executions is significantly higher in the second half of the year. The execution numbers are particularly low in March (the Iranian New Year) and June (presidential elections; see below).

Execution trends before and after the presidential elections To The United Nations:

To The International Community: