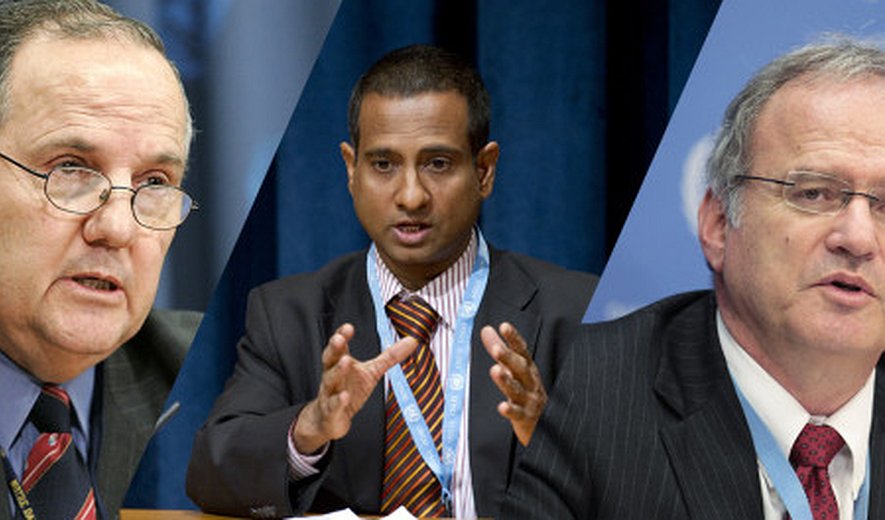 Following the recent wave of executions in Iran, where at least 40 people were executed in the first two weeks of January 2014, the United Nations Special Rapporteurs on the situation of human rights in Iran, Ahmed Shaheed, and on summary executions, Christof Heyns, and the UN Special Rapporteur on torture and other cruel, inhuman or degrading treatment or punishment, Juan E. Méndeztoday urged the Iranian authorities to urgently halt the executions in the country.

The following Press Releases was published today (22/01/2014)  by the UN Special Rapporteurs:

GENEVA (22 January 2014) – The United Nations Special Rapporteurs on the situation of human rights in Iran, Ahmed Shaheed, and on summary executions, Christof Heyns, today called on the Government of Iran to urgently halt the abrupt surge in hangings in the country since the start of 2014. “We are dismayed at the continued application of the death penalty with alarming frequency by the authorities, despite repeated calls for Iran to establish a moratorium on executions,” the independent experts said, stressing “the inherently cruel, inhuman and degrading nature of the death penalty.” At least 40 persons have been reportedly hanged in the first two weeks of January, of which at least 33 executions were carried out in the past week alone. 625 executions, including at least 28 women and a number of political prisoners were reported to have been carried out in 2013. The majority of those executions were for drug-related offences, but a number of individuals were also executed for the crimes of Moharabeh (‘enmity against God’), or acting against national security. “It is deeply concerning that the Government proceeds with executions for crimes that do not meet the threshold of the ‘most serious crimes’ as required by international law, and when serious concerns remain about due process rights,” the Special Rapporteur on extrajudicial, summary or arbitrary executions said. “I would like to recall once again that, if the death penalty is to be used at all in the countries which have not yet abolished it, international law requires that it may be imposed only after proceedings that met the highest level of respect of fair trial and due process standards. The ‘most serious crimes’ provision further requires that it is imposed only for the offence of intentional killing,” Mr. Heyns noted. The Special Rapporteur on the situation of human rights in Iran also raised alarm at the recent pace of executions of political activists and individuals from ethnic minority groups, and urged the Government to stop the execution and to revisit the cases of people at risk of execution. “The persistent execution of individuals for exercising their rights to freedom of assembly, association, and affiliation to minority groups contravenes universally accepted human rights principles and norms,” Mr. Shaheed said. The independent human rights expert noted that the Government had hanged 16 members of the Baloch community on 26 October 2013, in reprisal to the killings of 14 border guards the day before. “Execution of individuals as a form of retaliation for another crime is an action unquestionably illegal under international human rights law,” the experts said. “The Government of Iran has legal and moral obligations to respect the right to life, which is the most fundamental of all human rights.” “We once more urge the Government of Iran, as an active member of the international community, to heed the calls for a moratorium on executions, especially in cases relating to political activists and alleged drug-offences,” they said. “In the meantime, we urge the Iranian authorities at least to restrict the use of the death penalty to what is permissible as an exception under international law, and namely to limit its imposition only for the crime of intentional killing, and to respect stringently international standards guaranteeing fair trial and due process for those facing the death penalty,” the Special Rapporteurs stressed. The experts’ appeal was also endorsed by the UN Special Rapporteur on torture and other cruel, inhuman or degrading treatment or punishment, Juan E. Méndez. —– Photo: Juan Mendez, UN Photo, (c) Mark Garten; Ahmed Shaheed, UN Photo, (c) Evan Schneider; Cristof Heyns, UN Photo, (c) Paulo Filgueiras