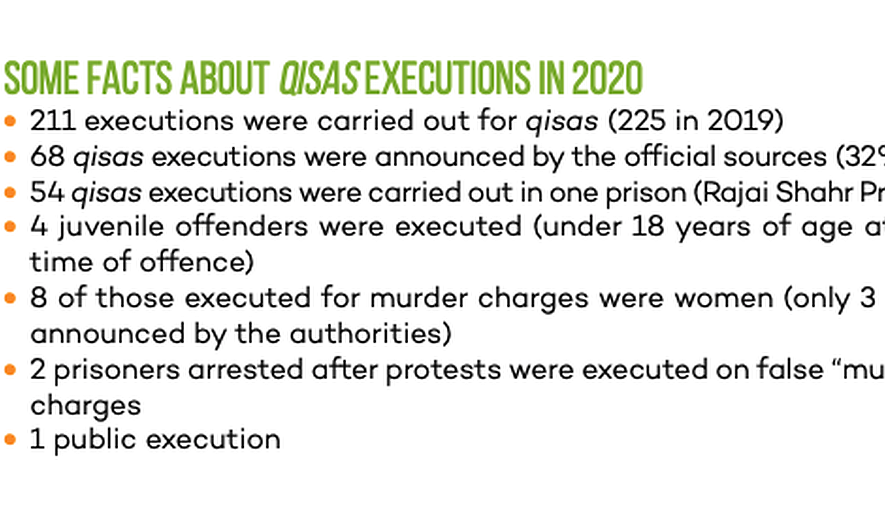 Iran Human Rights (IHR); April 30, 2021: In 2020, murder was the most common charge and 211 of the 267 people executed had been sentenced to qisas (retribution-in-kind). Four juvenile offenders and eight women were among those executed for murder.

This article is an extract from Iran Human Rights’ 2020 Annual Report on the Death Penalty in Iran.
Read PDF version here. 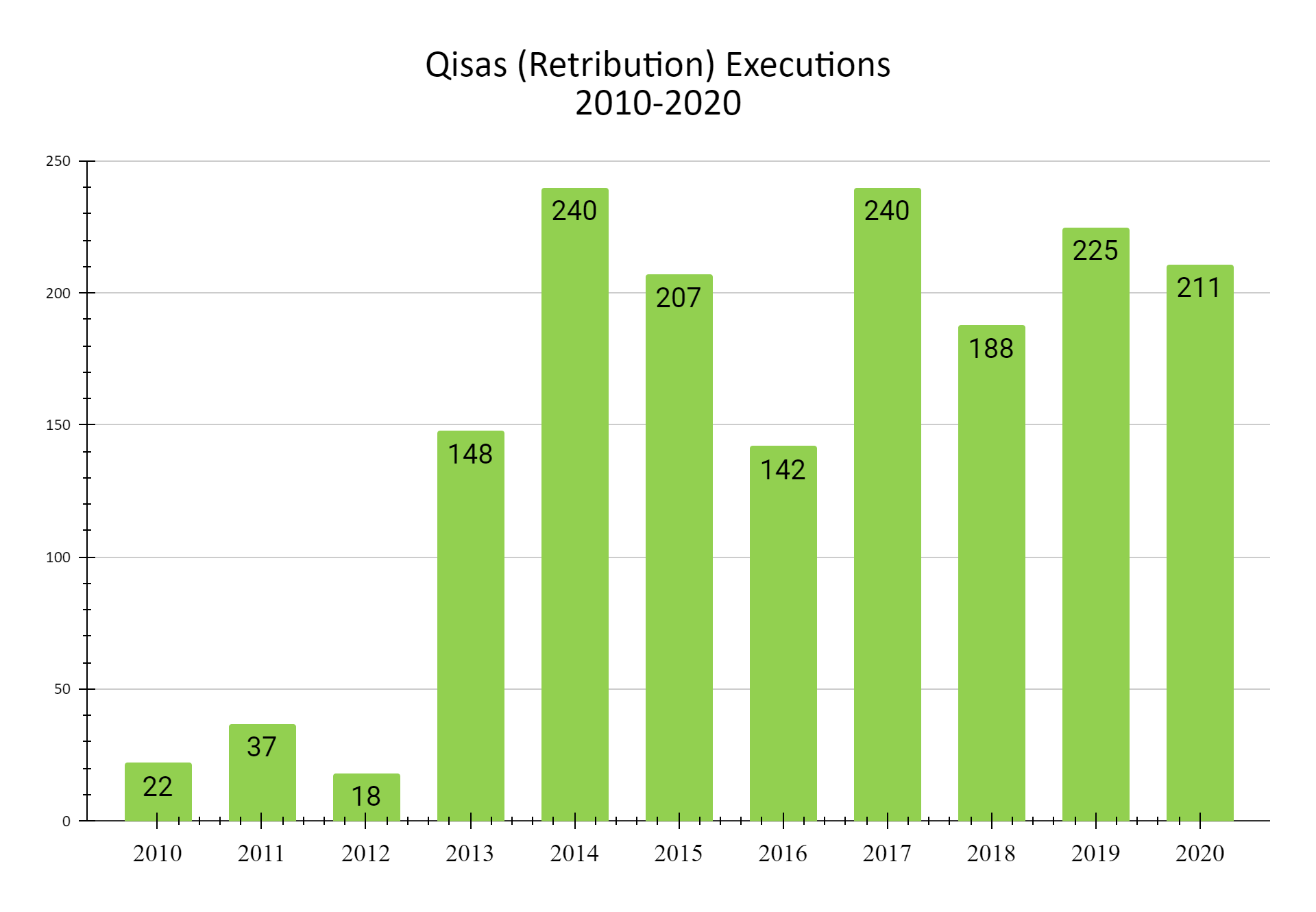 The number of qisas executions, which was relatively low between 2010 and 2012, increased dramatically in 2013 and has remained at a significant level since. This coincides with growing international criticism of Iran’s drug-related executions. In 2020, at least 211 people were subjected to qisas executions, which remains one of the highest counts in the last 11 years.

The detailed geographical distribution of qisas executions will be provided under the section “Forgiveness Movement” of this report. However, reports in the last 6 years demonstrate that each year, a significant portion of all qisas executions were carried out in one single prison in the Alborz/Tehran area. In addition, Rajai Shahr prison (previously known as Gohardasht) has been the site of the execution of many political prisoners, particularly those belonging to banned Kurdish political parties. In 2020, at least 54 qisas sentences were carried out in Rajai Shahr prison. This accounts for 25% of all qisas executions in Iran. 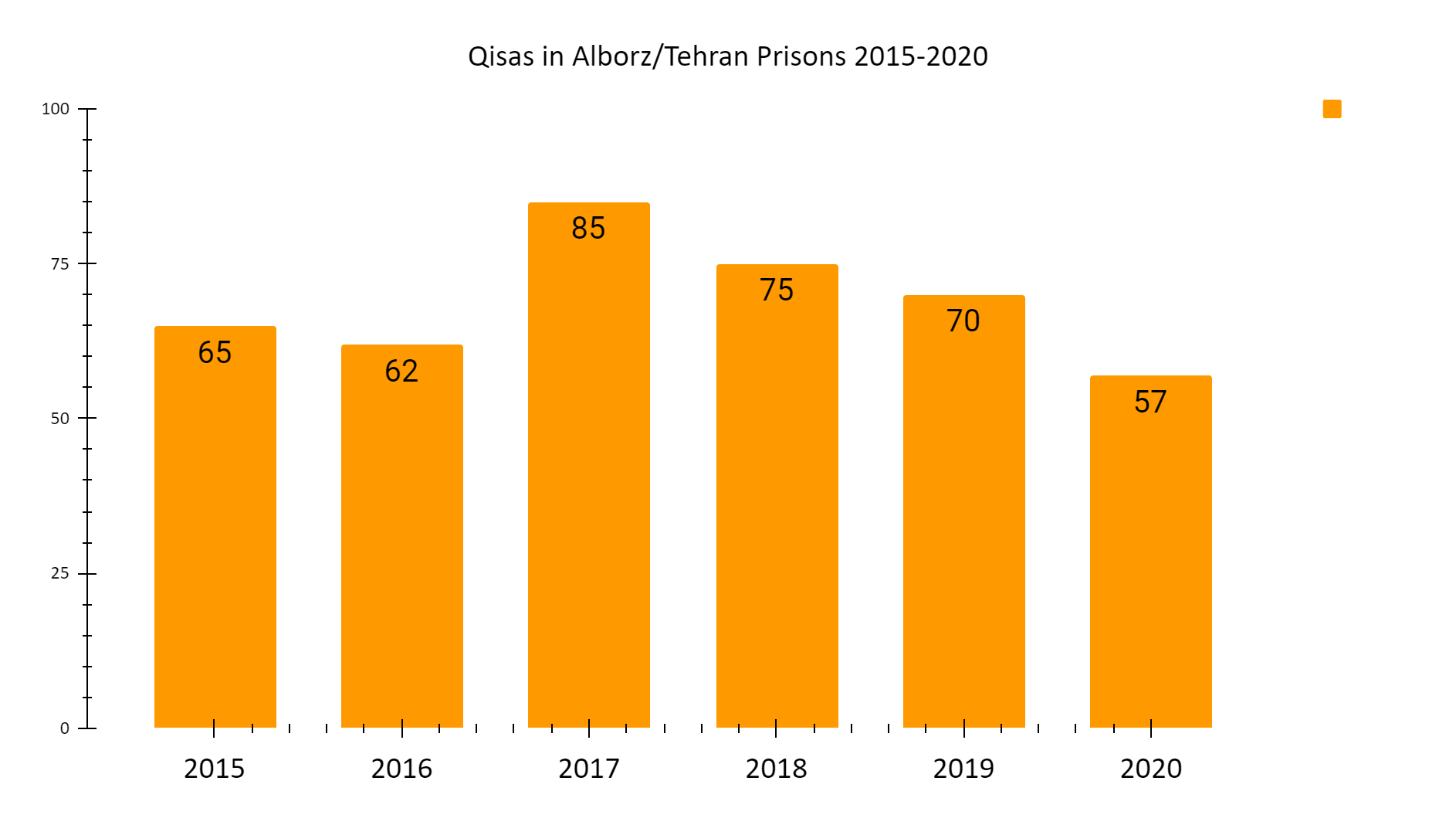 The 211 qisas executions in 2020 include a variety of cases, the majority of which involve defendants being denied their rights to due process and a fair trial.

Ahad Salehi: hung in his wheelchair

28 year-old Ahad Salehi was shot by the police during his arrest, injuring his spinal cord and confining him to a wheelchair. He was sentenced to qisas and was hanged while sitting in his wheelchair on 29 February 2020, in Mashhad Central Prison.[1]

Hamidreza Ashgharpour-Masouleh was arrested and charged with the murder of his wife. With no hard evidence and despite his denial, Hamidreza was sentenced to death by qassameh (sworn oath). According to an informed source: “He was charged with his wife’s murder but there were doubts as to it even being a murder. The forensic pathologist had first ruled that she had died of natural causes and that the bruises on her body were caused by the ambulance team trying to resuscitate her. But they later changed their minds. The court sentenced him to death through a qassameh ceremony.” Hamidreza was executed in Rajai Shahr Prison on 22 April 2020 along with 6 other prisoners.[2]

A prisoner only identified as Hamid, 29, and homeless, was arrested on 26 April 2016 on charges of stealing electric cables in Arak, and sentenced to imprisonment. He later “confessed” to two murders during interrogations and was sentenced to qisas. Though the exact date of his execution is not known, on 28 February 2020, it was reported that he had been executed at Ghezel Hesar Prison.[3]

According to the IPC, murder is punished by qisas, where the family of the victim can demand a retribution death sentence. But they can also demand diya (blood money) instead of a death sentence or can simply grant forgiveness.

IHR has collected forgiveness reports since 2015. Altogether, the reports gathered in the past 4 years show that the families of murder victims who chose forgiveness or diya for murder convicts outnumber those who chose the death penalty.[4]

For the sake of simplicity, we will use the term forgiveness in the following section, regardless of whether there has been a demand for blood money or not. 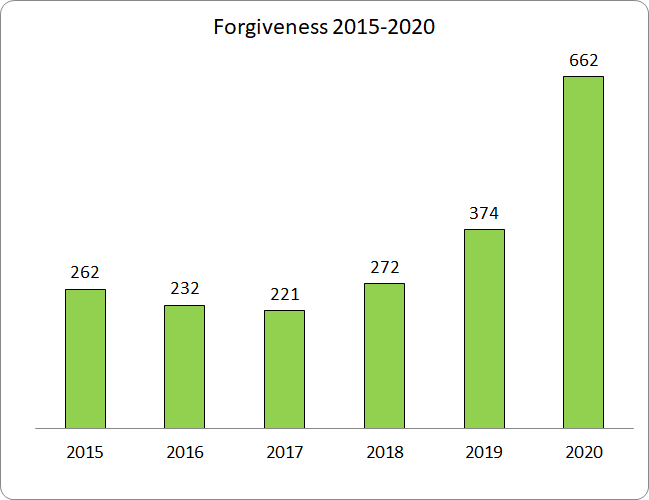 In 2020, the forgiveness cases outnumbered those of implemented qisas executions. The actual numbers for both forgiveness and qisas death sentences are believed to be higher. Reports indicate that the number of forgiveness cases might be several folds higher than the numbers presented in this report.

The increasing trend of forgiveness in Iran correlates with a survey conducted in September 2020 showing the majority of people prefer alternative punishments to the qisas death penalty for murder victims.[5] Iranian authorities assert that qisas is the right of the plaintiff (the victim’s family) and that most qisas executions take place upon the plaintiff’s request.

However, when questioned about their preferred punishment if an immediate family member was murdered, only 21.5% of respondents chose qisas, while more than 50% preferred alternative punishments such as imprisonment. 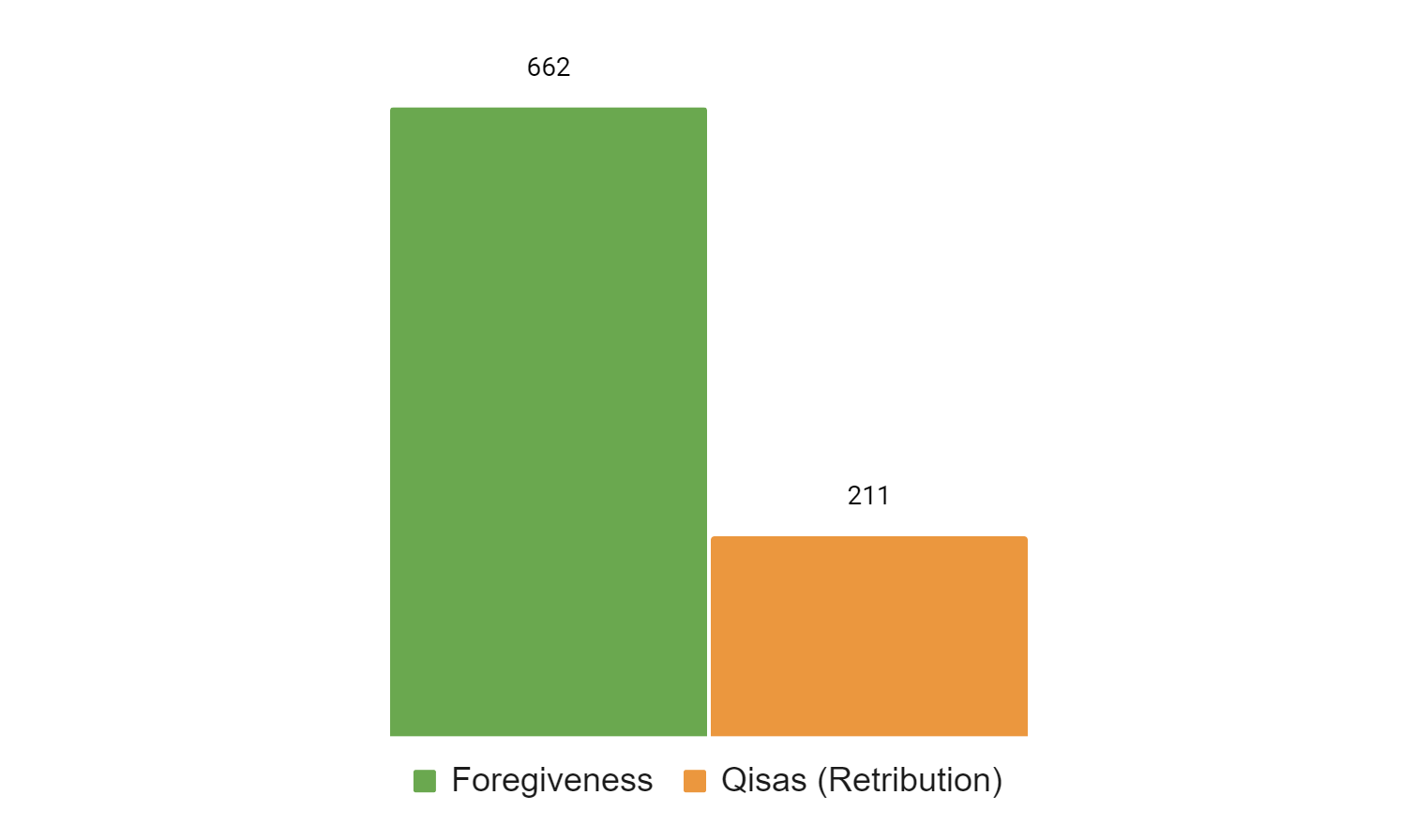 Diagram showing the number of implemented retribution death sentences and forgiveness cases in 2020. 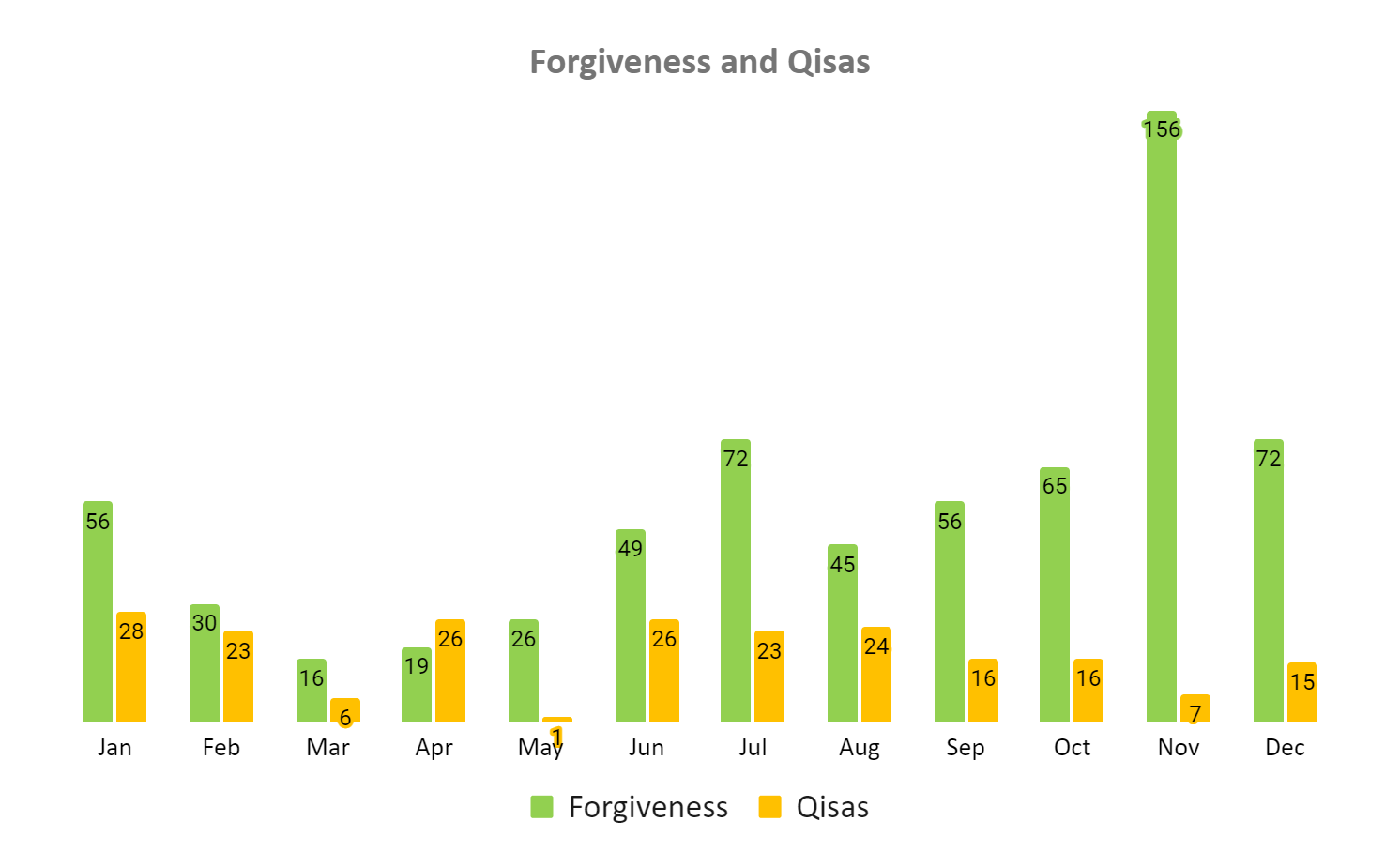 The diagram above shows the monthly breakdown of implemented qisas death sentences compared to forgiveness cases. 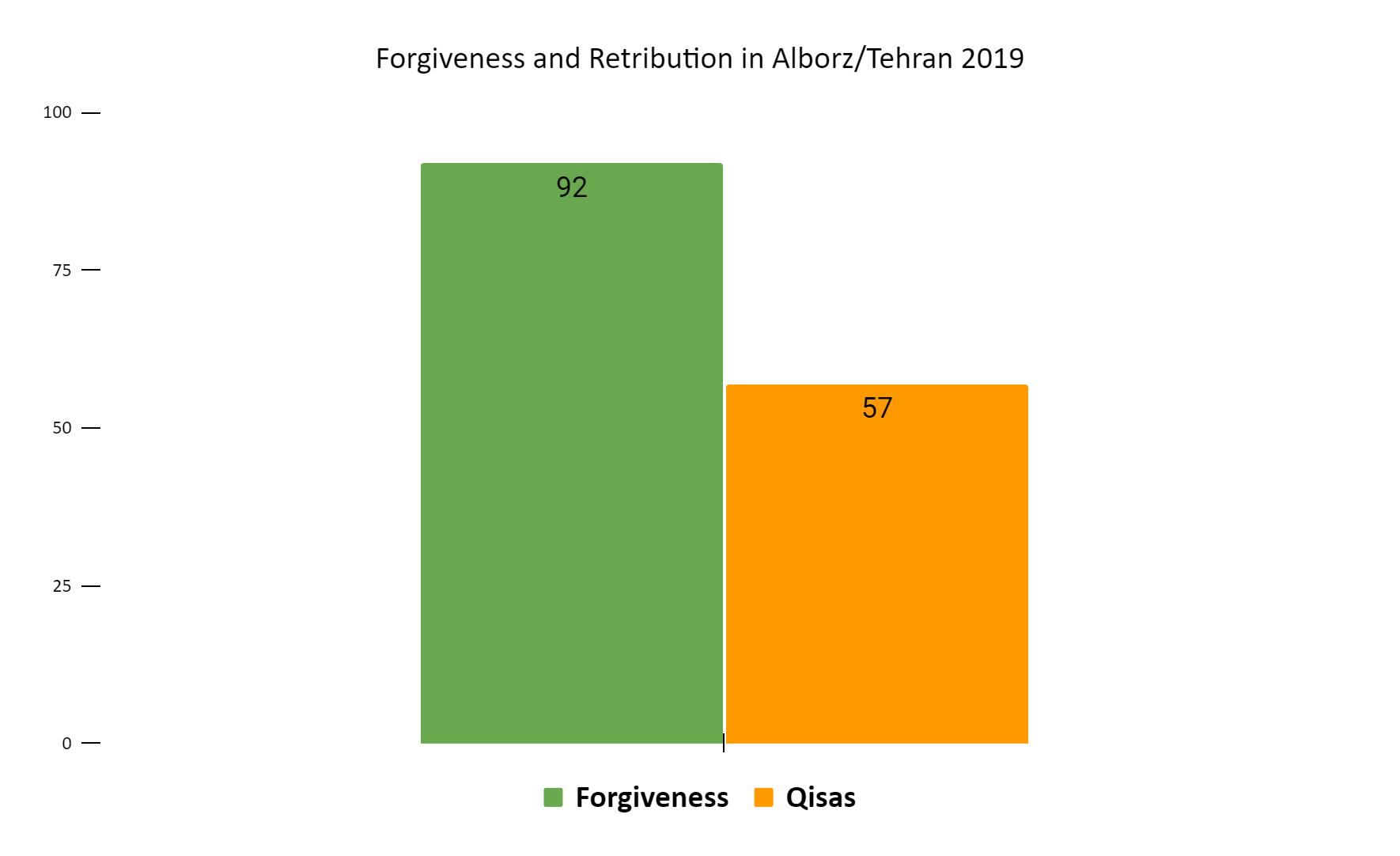 Diagram: Prisons in the Tehran and Karaj (Alborz) area were the sites of the highest number of both forgiveness and qisas cases in 2020 in Iran.