Executions for Drug-related Charges in 2021

According to reports gathered by IHRNGO, at least 126 people were executed for drug-related offences in 2021. This represents a fivefold increase of the number of drug-related executions compared with the previous three years. None of the executions were announced by the official media, all were confirmed by IHRNGO sources.

Facts about the drug-related executions in 2021: 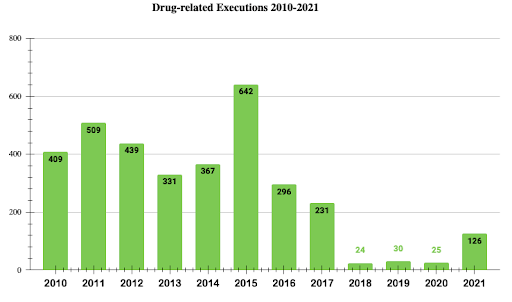 According to IHRNGO reports, an annual average of at least 403 people were executed for drug-related offences between 2010 and 2017. The diagram above shows the reduction in the number of drug-related executions observed in the three years following the enforcement of the Amendment to the Anti-Narcotics Law at the end of 2017, which rose significantly in 2021. 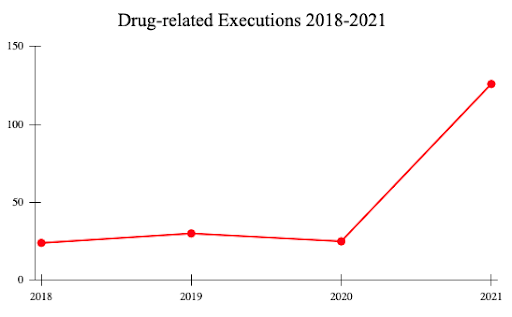 Drug-related executions increased by fivefold in 2021, compared to the last three years’ average. This dramatic increase has been met with little international reaction. 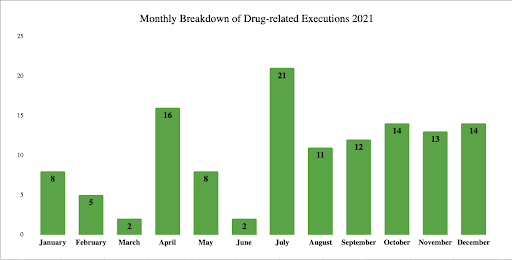 Executions for drug-related offences were carried out over all 12 months of the year. The peak was in July, the month after the presidential elections, and the number of executions in the second half of the year were twice as high as the first half. 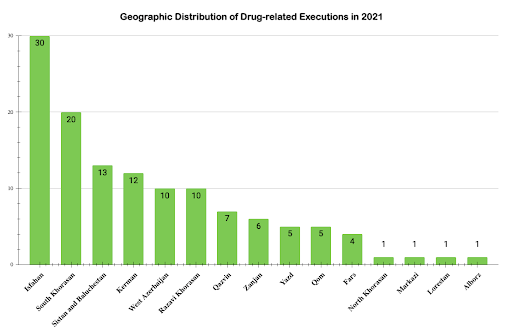 In 2021, drug-related executions were carried out across 15 different provinces. 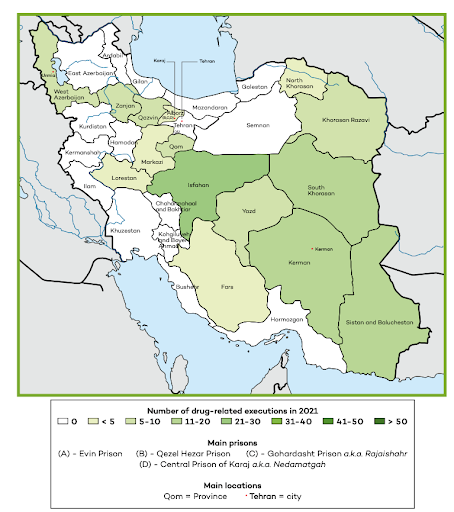 Along with security charges, drug-related charges fall under the jurisdiction of the Revolutionary Courts which, as aforementioned, systematically deny defendants their right to due process and a fair trial. Of the 126 drug-related executions recorded by IHRNGO, Baluch ethnic minorities were overrepresented with 43.65% (55) in 2021. Many of the Baluch prisoners were executed in prisons outside Sistan and Baluchestan province. Another pattern has been the sentencing and execution of family members together, as highlighted below. You can read all other cases on the IHRNGO website.

Abdullah and Younes Totazehi: An uncle and nephew 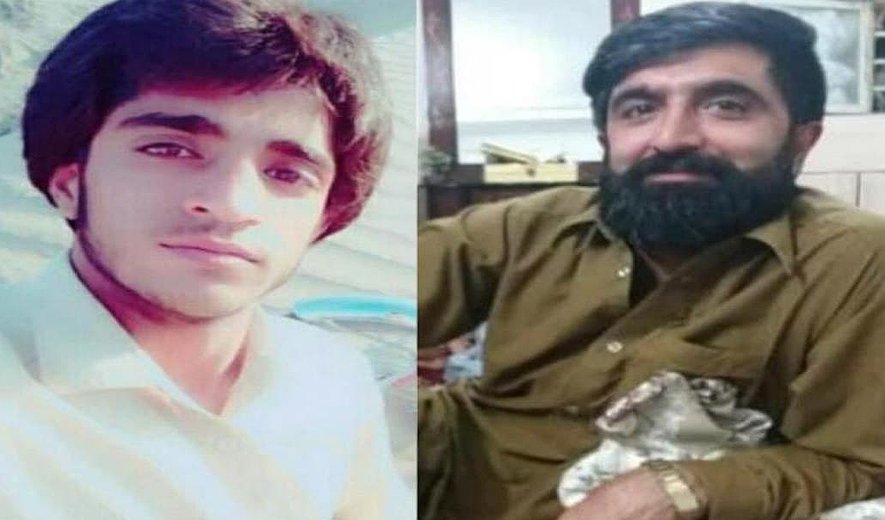 Abdullah Totazehi and his nephew, Younes Totazehi were driving through Birjand when they were ambushed by anti-narcotics forces on a side road in 2019. In the clash that pursued, the third passenger, Abdolghias Totazehi was killed and Abdullah and Younes arrested. They were sentenced to death for drug offences and executed in Birjand Central Prison on 19 May 2021.

Brothers Amir and Akbar Jalilifar were arrested and sentenced to death for drug-related charges in 2016 and spent four years on death row. Akbar was the father of  a child. They were executed in Isfahan Central Prison on the morning of 11 July 2021.

Cousins Amir and Sohrab Heydari were arrested and sentenced to death for drug offences in 2016 and spent four years behind bars in Yazd Central Prison. They were executed at the prison on the morning of 25 July 2021.

Hossein and Ramin Dadzadeh: A father and son

Hossein Dadzadeh and his son, Ramin were arrested on drug-related charges in 2015. They were sentenced to death and executed in Yazd Central Prison five years later, on 3 October 2021. 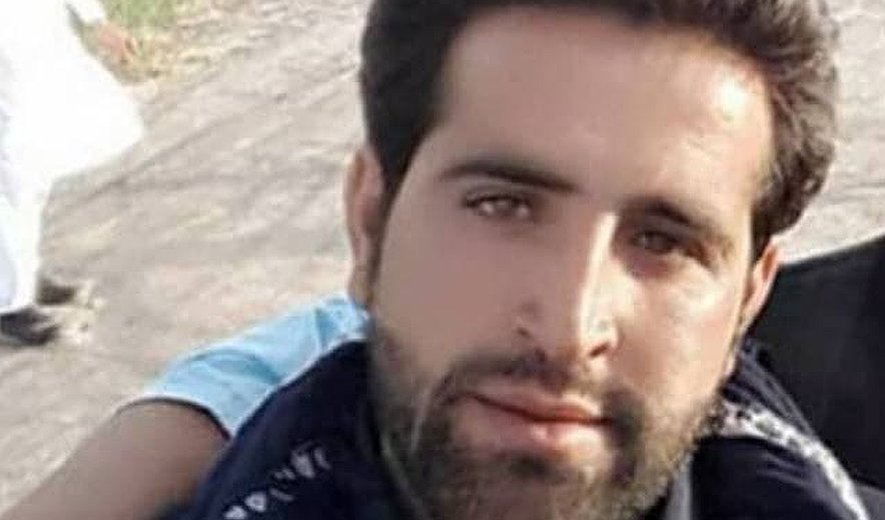 30-year-old Ali Nehtani was a trainee bus driver on the Zahedan-Mashhad route when he was arrested on drug charges in 2019 and sentenced to death by the Revolutionary Court. He was executed in Qaen Prison (Qaen, South Khorasan) on 15 December 2021.

Four years after the reform to the Anti-Narcotics Law aimed at reduction of executions: Alarming reversal in 2021

Iranian authorities introduced the 2017 Amendment to the Anti-Narcotics Law mainly due to international pressure. Crucially, European states funding the United Nations Office on Drugs and Crime (UNODC) projects to combat illegal drugs in Iran were unwilling to fund any further projects due to the high number of drug-related executions.

There is grave concern that the decline in the number of drug-related executions observed in 2018-2020 might be permanently reversed if the international community does not react. Voices within Iran’s security apparatus have already called for more execution of drug offenders. In November 2021, The Police Commander of Greater Tehran, Hossein Rahimi, criticised the 2017 changes to the Anti-Narcotics Law in a statement, asserting that, “removing the death penalty from drug charges has made offenders more brazen.”

The authorities’ need to instil fear in society in order to prevent further dissent is the most likely reason for the sharp increase in the number of drug-related executions. Drug offenders are predominantly from the most marginalised groups in society and the international community’s silence makes the political cost of their execution very low. The 2017 Amendment's major shortcoming which provides a loophole for authorities to carry out drug-related executions when they desire, is that it did not address due process and fair trial issues.

All drug-related offences are processed by the Revolutionary Courts. Reports collected by IHRNGO demonstrate that those arrested for drug-related offences are systematically subjected to torture in the weeks following their arrest. They often do not have access to a lawyer while in detention and by the time a lawyer gains access to their case, they have already “confessed” to the crime. Revolutionary Court trials are also typically very short, with lawyers often not even given a chance to present a defence for their clients. 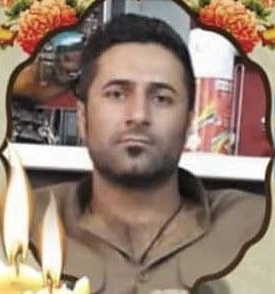 Khezr Ghavidel was arrested in Urmia on charges of carrying methamphetamine with two other people in 2013, and sentenced to death by the Revolutionary Court. His case was still pending a decision at the Supreme Court when he was executed in Urmia Central Prison on 10 September 2020. Ten months later, in June 2021, the Supreme Court overturned his death sentence and commuted his co-defendants’ sentences to 30 years imprisonment. His family were told to lodge complaints as they would be entitled to receive diya (blood money). They told IHRNGO that “even if they paid us billions of tomans, it still wouldn’t make up for what was taken from us.”